Report Debates Digital | Serbia
Serbian president Aleksandar Vučić in a virtual electoral rally during the Covid-19 lockdown, on 16 May 2020. 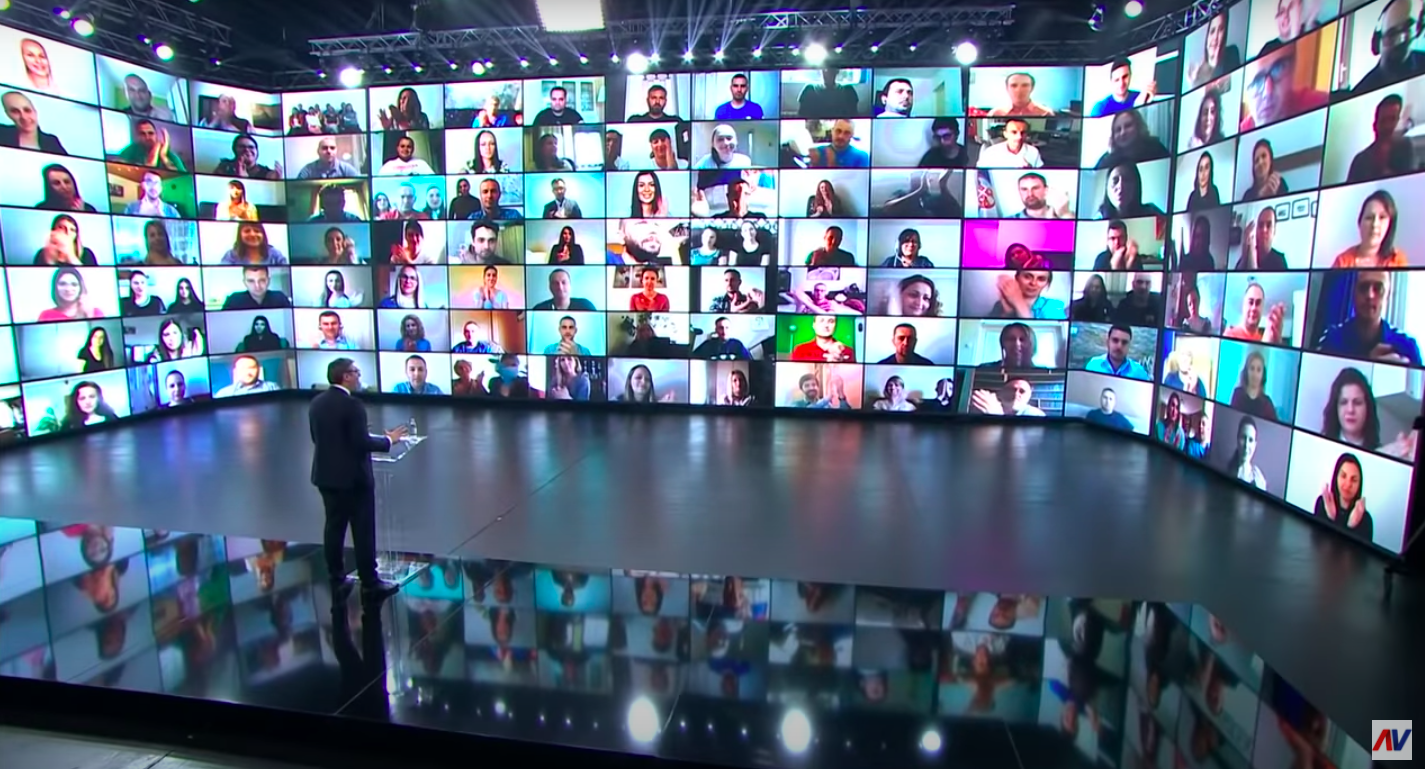 The coronavirus has revealed how fragile our freedoms are and just how little it takes to lose them. Both authorities and citizens have been complicit in turning the Covid-19 quandary into a manifestation of authoritarianism and social fragmentation, writes Serbian historian Dubravka Stojanovic. Instead of herd immunity, we got herd democracy.

Александар Вучић | YouTube  | Serbian president Aleksandar Vučić in a virtual electoral rally during the Covid-19 lockdown, on 16 May 2020.

Medicine is struggling to understand all the mysteries and mechanisms of the coronavirus. In contrast, the coronavirus has fully unveiled the mysteries and mechanisms of many political regimes. It acted as a kind of blowup, amplifying everything that we have been witnessing for quite some time, but refused to see. The "invisible enemy" has rendered political problems visible. Primarily, it revealed how we handle freedoms in a crisis and how quickly freedom becomes burdensome when we feel threatened.

The pandemic has shown how seemingly distant regimes are actually alike, particularly those grounded in the fantasy of their own uniqueness and exceptionalism. From Xi Jinping and Vladimir Putin, to Viktor Orbán and Aleksandar Vučić to Boris Johnson, Trump and Bolsonaro, everyone's initial reactions to the virus were very similar – first covering up the seriousness of the situation, then making fun of the virus, saying that it can't do nothing to "us", that "our" measures would not be like everyone else's.

Then some of them, when the death rate shook their initial unwavering positions, began introducing the most radical measures, maybe in an effort to remain exceptional. The pandemic, which they claimed was completely ludicrous, was taken seriously as an opportunity to twist their citizens' hands and shut their mouths.

Their glowing faces at press conferences clearly showed they were having the time of their lives, that the pandemic was a unique opportunity to turn their mood swings into a system. In a word - to grant themselves every freedom imaginable. In this competitive discipline, Viktor Orbán stole the European spotlight, while Aleksandar Vučić, the ruler of my country, Serbia, went under the radar.

In the early days of the pandemic, Vučić sniggered in a press conference as he stood behind the doctors who claimed this was "the funniest virus ever as it exists only on Facebook" and urged Serbian women to rush to Milan and get a good deal on shoes under lockdown! And then Vučić introduced measures unlike those in any other country.

The pandemic could not touch us

He declared a state of emergency on his own, without parliamentary approval, violating the Constitution. Armed soldiers were deployed to the streets. People over 65 were forbidden to leave their houses. He introduced a 12-hour daily curfew (from 5 PM to 5 AM). On weekends people were placed under a round-the-clock curfew, and for Easter, the total ban on movement reached a record long 84 hours. The parliament was dissolved. A journalist who wrote about the conditions in hospitals was arrested. A musician was arrested for an undesirable song. Crisis Staff press conferences were canceled because asking questions about the pandemic was considered treasonous.

One moment Vučić claimed that the pandemic could not touch us, that one could avoid getting sick by drinking slivovitz, and the next that there would be so many casualties the cemeteries would run out of space. Radical measures changed almost every day, rights were granted and then revoked. Pro-government tabloids spread fake news and conspiracy theories that contradicted what the Crisis Staff announced. Every effort was made to drive the citizens out of their wits and, in the prevailing anxiety, consolidate their belief in the leader and his strong grip.

This behaviour by the authorities was not unexpected. Really interesting, however, is how citizens handled their freedoms. In most countries, government approval ratings have soared. Both for those that introduced rational and effective anti-pandemic measures, but also for those that seized the opportunity and suspended freedoms while at the same time experiencing record high infection and death rates, for instance Serbia, which had the most stringent safety measures in the region, but more than double the number of cases per million compared to other ex-Yugoslav states. People flocked around their leaders, readily handing over their rights to those who knew how to use them better. Huddling together came instinctually, so opposition parties, at least in Serbia, also forgot their responsibilities and obligations to the citizens, saying how this was not the time to talk politics!

Many citizens readily adapted to the emergency situation. Many revealed in the opportunity to bring state violence down from the top to our little corner shop. As soon as lines formed outside stores, self-proclaimed kapos popped up, loudly demonstrating their newly gained power, shouting orders and intimidating people. Not out of concern for maintaining order, but out of pure pleasure. Some self-appointees pointed fingers at people over 65, kicked them out of shops, told them to go home. Police reports said that virtually everyone over 65 who violated the stay-at-home order was reported by their neighbour. Sounds familiar?

Along with this everyday sidewalk fascism, we saw a completely different phenomenon. In many places around the globe, the relaxation of measures was immediately followed by the virtually unbridled behavior of citizens. People crowded into cafes, parks and beaches, as if there had never been any danger and as if it would never come. Many, from Bosnian politicians to German police officers, were caught violating the measures at secret parties, while people in Greece filled the reopened beaches. Even the Swedish authorities were confounded by the irresponsible behavior of citizens who carelessly crowded into cafes, so the government was forced to abandon parts of their trust-based policy.

It might seem as if I'm describing unrelated events. I don't think so. On the contrary. I think these are different appearances of a system we call illiberal democracy. These regimes differ from each other, but what they have in common is the way they manage freedoms. It was on this point that the authorities and citizens found a common ground. The distribution of power from top to bottom came quickly. The citizens embraced the abolition of institutions as a release from responsibility. They understood the disregard for the law by the authorities as a hint that all restrictions are off. In losing their rights they saw an opportunity to appropriate what is left of their liberties and use them however they like.

When the authorities suspended the restrictions, citizens took that as being free not to care about each other. Both the authorities and citizens took a chunk of what they needed at that moment, used it, and then threw it away when they got bored with it. They blamed the virus on the enemy (China, George Soros, Jews, migrants, 5G, Bill Gates…), and then went after him with all their might. They invoked science when they needed it, and ridiculed it when it did not work in their favour.

They tried to damage every authority, questioned everything, spread and sowed doubt to undermine trust, unity and solidarity. By letting themselves be caught up in this game, citizens also contributed to social fragmentation, to the construction of frightened and insecure individuals wishing for someone to come and slam their fist against the table. What Covid-19 has shown is how fragile our freedoms are, and just how little it takes to lose them. To everyone's delight.

We did not achieve herd immunity, but we got herd democracy. It looks like we need to start over.

This article is part of the Debates Digital project, a series of digitally published content including texts and live discussions by some of the outstanding writers, scholars and public intellectuals who are part of the Debates on Europe network. An online discussion with the authors will take place on 16 June at 7 PM CEST, and will be streamed on YouTube.