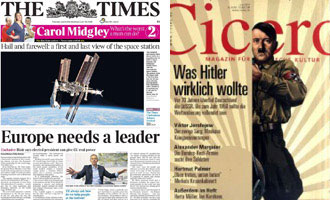 “Europe needs an elected leader.” So run the thoughts of former British PM Tony Blair, in what The Times terms “a wide ranging” interview granted to the London daily. Blair, currently Middle East envoy for the Quartet, and enjoying lucrative advisory roles for global financial institutions, argues that electing a president would “give European citizens more of an affinity with the European Union.” Voters, he argues, have very little love for EU institutions like the European Parliament, the one democratically elected EU body. He illustrates this, The Times notes, “by failing, when asked, to name his MEP.” Blair’s proposal, the London daily writes, would give a European president the largest electoral mandate in the world.

For Europe, the crucial thing is to understand that the only way that you will get support for Europe today is not on the basis of a sort of postwar view that the EU is necessary for peace. For my children’s generation, that is just a bizarre argument. They don’t see that as a real threat, that European nations will go to war with each other.

But what they can understand completely is that in a world in particular in which China is going to become the dominant power of the 21st century, it is sensible for Europe to combine together.

For British Labour MP Diane Abbot in the Guardian – “A cold shiver must have passed down many a spine.” Because there can be no doubt, she argues, “which particular bronzed globetrotter he has in mind for the role.”

While no doubt a prospective President Blair “is dreaming of, once again, being at a rostrum side by side with the US president”, he could well have a serious rival. Berlin monthly Cicero is pondering the fate of the German chancellor, pointing out that that as she has little chance of being returned to office in 2013, she has no desire to go down in history as an electoral loser. Seeking a new role, she is now focused on –

… the mighty and prestigious job of the President of the European Council. Bravely and cleverly she battled to have this job filled by a weak personality [in 2009] to be able to say one day: ‘It’s now time for a powerful solution.’ Of course Angela Merkel is thinking of the destiny of Angela Merkel.

At present the EU is headed by the President of the European Council — Belgian Herman Van Rompuy and José Manuel Barroso, President of the European Commission, neither of whom have been directly elected to office. According to the Daily Telegraph, their personal “feud” as to who is “Europe’s true leader” has reached such a point that they have elected to travel to the June 10 EU/Russia summit in separate VIP jets. The cost of Mr Barroso’s Brussels to Russia air-taxi is estimated as between £50,000 to £70,000, the London daily notes.