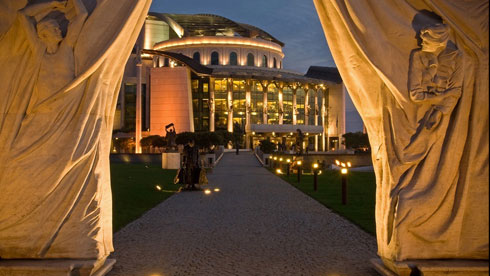 A once thriving creative and cultural scene is now dominated by Hungarian nationalist values ​​defended by the government, warns a Hungarian journalist who has now left the country to live in Germany.

He who swaps his homeland, swaps his soul, they say in Hungary. Still, in the last two and a half years, more than half a million Hungarians have left the country and spread throughout the world. That is twice as many as those who left after the Hungarian Uprising was put down in 1956 – a lot of people for a country with just 10m inhabitants.

I too have decided to stop putting up with it. There are plenty of reasons: money, future prospects, above all the feeling of being muzzled in today’s Hungary.

I belong to a generation that after 1990 was young enough to be able to feel something: that the atmosphere of the years of childhood and school had changed. If you have ever experienced the freedom to have an opinion, to express it openly, then it’s not a habit you can give up that easily. Life in Hungary was never rosy, or easy; it is not a country with just 50 years of history.

Around the turn of century, alternative culture in Hungary was blossoming. There were repertory cinemas on every corner of Budapest, a new Hungarian film came out almost every month, and a new wave of young filmmakers were constantly shooting. In the evening you could sit with friends on Liszt Ferenc square, outdoors on Andrássy Street, in a café along Nagymező Street (Budapest’s "Broadway"), in the "ruin pubs", and talk about what you had just seen or read. Television had slots for cultural programmes and balanced discussions on politics.

One stood for something, and believed in something: in a future. Perhaps Vienna or Berlin were cleaner and richer, but that would come to Budapest too soon. Urban development programmes and infrastructure adaptation progressed more slowly as they ran into delays. At the time there was some charm to that. The direction was agreeable: Budapest was on its way to becoming a colourful, vibrant, prosperous, tolerant metropolis. In other word, a normal metropolis.

For two or three years now, though, none of that is left: no hope, no charm, no illusions. The politics of the Fidesz party have since become ubiquitous in the lives of everyone. These politics put the brakes on everything that was innovative, free, alternative and critical. The alternative theatre scene, which has received no funding in the past three years, has been left to bleed out. This is the third year that no films have been produced, and the first year in which there has been no Hungarian film week – what movies are there to be screened?

Viktor Orban's party militants sit in the leadership positions of the State Theatre, and they have the last word on what is meant by culture. Radical amateurs have become leaders.

Culture may be just one thing among many, but as a culture journalist it touches me to the quick. My work has become impossible. There is no longer a culture editor at the public television station. Thousands of television journalists ended up without a job because the cultural programmes were axed, only party loyalists can anchor the political shows, and the news comes laced with propaganda: there is just one truth.

Everything must bear the stamp of nationalism in Hungary: the thinking, the theatre, the art – you could even say the breathing. In the name of the new order, the old will be destroyed: the schools, the universities. Despite the campaign promises, Fidesz wants to introduce tuition fees – those who study free of charge must sign a contract declaring that they will not leave the country for three to six years after graduating. When students protest, police are sent into their apartments.

Once a week I pick up the magazines and newspapers. They run tabloid stories with a touch of criminality from the present day, for example about building projects along the Romai shore, the only naturally preserved stretch of the Danube in Budapest, still lined with poplar trees. A dam is to be built to protect the summer cottages that the wealthy have built there without permits – and not to protect the towerblocks, which get flooded every year. The Mayor of Budapest is backing the project. Other mayors around the country are also supporting other projects. In small towns and in the countryside, they have the roads asphalted right to their garage doors – paid for with public funds.

The spirit of the age can be seen in the most recent revision of the Constitution, which was approved by the Parliament last week. Numerous articles that had once been deleted as unconstitutional ended up back in the basic law, including making homelessness a punishable offence. Or whether and how public figures may be criticised. Apart from that, the Constitutional Court can no longer have any control, or only limited control, over the basic law.

Keeping silent always helps only those in power, the oppressors and not the oppressed. One senses that on every street corner in Hungary. Depressed faces in the public transport, empty shops and restaurants. Everything is fined and sanctioned, "There must be order," and the Treasury is filling up; meanwhile, there are more parking wardens than cars. Roma may publicly be called "animals", and the journalists who writes such things need not apologise, because many who see themselves as enlightened Hungarians are pleased that they write it.

Before I decided to leave, I had the feeling that everything was going downhill and no one was doing anything to stop it. As the latest polls show, the country will continue to slide. Around 40 per cent of the citizens would again choose the egomaniac leader Orbán and his party, even though they know that the emperor is naked. But in a country where many are naked, a prime minister will certainly not be reproached for it – especially not when there are benefits to be reaped from it. Or if you’re not independent, or afraid to lose your job and therefore your livelihood if you open your mouth.

He who swaps his homeland swaps his soul, they say in Hungary. But I'm Hungarian, and Hungarian I will always remain.