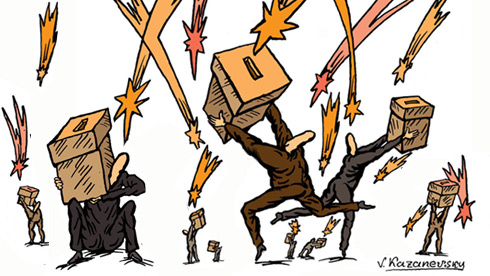 On September 29, Austrians will elect their new parliament. Following a lacklustre campaign, the result may be, as usual, a grand coalition. Unless the nationalist parties come up with a surprise.

The National Council will be elected in Austria on September 29. To better understand Austrian politics, one has to know two illuminating facts.

First of all, a quarter of all Austrians live in Vienna, which dominates the rest of the country as, within Europe, probably only London dominates England. Germany has, apart from Berlin, the not-uninteresting Hamburg and Munich. The other major Austrian cities are Graz, Linz, and Salzburg, and have between 100,000 and some 250,000 inhabitants, some not even that. For comparison’s sake, Vienna has 23 districts and nearly 180,000 people live in just one of them, Favoriten.

Secondly: Vienna boils down to the inner city, at least politically. Most of the ministries, the Hofburg Imperial Palace, and the parliament are in the three square kilometres of the first district. Officials, such as members of parliament and ministers, eat together or sit down with journalists for lunch (on a first-name basis, as a rule, across all the parties). The reader must understand this Austrian peculiarity, this cronyism, this corruption; here, you know who doesn't like you by the avoided glance. You know them just the same. Everybody knows everybody here. These three square kilometres are the heart of the Austrian political scene.

No wonder, then, that the parties differ very little from each other in many fundamental questions. The frontrunners, though, are easy to tell apart.

‘A riddle no one wants to solve’

The head of the SPÖ [social democratic party] has been the Federal Chancellor since 2007. Werner Faymann is one of the most obscure personalities that have ever led the SPÖ. Something of a cross between a board member of a savings bank and principal of a Pflichtschule (required schooling in Austria), he works hard to come across as one of the little people, but remains colourless; he is a riddle that no one wants to solve.

His current conservative challenger, Michael Spindelegger [Austrian People's Party, conservative], with whom Faymann sat for five years in a grand coalition, is not a lot more exciting. He is, like all heads of the Austrian People's Party, a stalwart Catholic, very self-disciplined, leaves the house at seven in the morning and comes back around 10.30pm. An official who strides the halls of power. A person who is not to be underestimated, since he seems to have managed to cope with the constantly brewing quarrels in the ÖVP between the states and the federal government by coming up with compromises; he takes on tactically clever positions, and talks as intensively with the most influential conservatives as he does with the Vienna Archbishop, Cardinal Christoph Schönborn.

That's Austria too: When Werner Faymann gave a speech to the nation a few years ago, he welcomed with his first handshake the Federal President, then the Cardinal, and then the ministers. [[Politically speaking, Austria is only marginally less Catholic than the Vatican]].

Austrian politics are much more entertaining when one swings one’s gaze to the opposition benches. Here, two people stand out in particular. One is leader of the opposition Heinz-Christian Strache of the FPÖ Freedom Party of Austria, started by the former far-right leader Jörg Haider. The other is the career-changer Frank Stronach, the Austrian-Canadian billionaire founder of Magna International who has entered the fray with his own list of candidates, to which he – using any arguments he could find – brought over some MPs from the other parties and beefed it up with a few more adventurers.

From the standpoint of an observer watching for fun, following Strache and Stronach is quite rewarding. Trained as a dental technician, Strache moved in far-right groups of like-minded men in his youth, and agitated for years against foreigners. He gesticulated with a large cross during speeches against the construction of a planned mosque, and can now be seen in positive election campaign posters accompanied by the slogan “Love thy neighbour!” as he stands beside an elderly woman who affectionately strokes his chin.

Few people in Austria are so hated, to some extent rightly so, because of their political positions; some of the people behind him in the party are cases for the District Attorney, others, for the shrink. Funnily enough, away from the cameras and in person, he seems almost gentle. But so did [Pim Fortuyn].

Frank Stronach is 85 and the spiritual heir to Richard Lugner. Every year, Richard Lugner pays a celebrity from somewhere in the world a lot of money to join him in his box at the opera ball, steps out with girlfriends around 50 years younger than him, and plays the buffoon at every opportunity. In 1998 he wanted to become President of Austria, and he got 10 per cent of the vote. Something of this brand seems ready-made for Stronach. He is in favour of the death penalty “for professional killers”, has nothing against being spied on by the NSA, and is happy to pose without a shirt on for female reporters from the Austrian newspapers. His appearances in television studios are already legend: he doesn’t let anyone else get a word in, uses the first names of the presenters - without asking their permission - and berates the audience. He's fun to watch.

Yes, it's fun right now to be in Austria. And we will get what we deserve: a standstill. Lack of vision. Boredom. The Grand Coalition. As we have already had for the last 40 years of the 68 years since the end of the war.

“Who will govern with whom?” With two days left before general elections on September 29,
Die Presse examines a range of possible coalitions that could emerge after the vote.
For the Austrian daily, a “rainbow” coalition with a large number of small parties would offer the advantage of a certain continuity, but would also slow the pace of reforms. A three-party coalition would pave the way for political renewal, but might also result in instability. If the current SPÖ-ÖVP coalition loses its majority, Die Presse believes that a coalition with the Greens, a solution which has the support of the left-wing of the SPÖ, would be the most likely option.
According to the polls, a Red-Green coalition (between the social democrats of the SPÖ, and the Austrian Green Party) or a Black-Blue coalition (between the conservatives of the ÖVP and the extreme right FPÖ) can both be ruled out.
In the event that a three-party ÖVP-FPÖ-BZÖ coalition (between the conservatives, far right, and the populist Alliance for the Future of Austria) takes power, hardline legislation on immigration will be on the cards.
With regard to the future head of government, Die Presse explains that ÖVP candidate Michael Spindelegger cannot expect to enter the chancellor’s office without the support of a coalition with the FPÖ and the highly conservative Team Stronach, which, according to the daily —

… could lead to irresolvable issues with Europe.