Report Press review
Already a lost cause? Strikers take to the streets against government cuts in Malaga during Spain's general strike on 29 September.

Can anything stop the cuts?

The wave of protests against pay and public spending cuts shows anger over who should pay for the crisis will not go away. But are governments likely to buckle so easily to workers demands? Europe's press is far from sure.

Already a lost cause? Strikers take to the streets against government cuts in Malaga during Spain's general strike on 29 September. 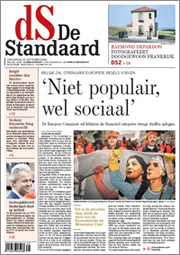 "Two different views of Europe clashed” in the EU capital, writes Le Soir — the European Commission’s advocates of austerity, on the one hand, and the "champions of a Europe based on heavy spending on the other, which the unions say will generate sustainable growth and quality jobs”. However, the Brussels daily cites a recent poll by the German metalworkers union, IG Metall, suggesting that “good financial governance is not synonymous with full employment. Germany, the only European country to have been spared a huge rise in unemployment, is now fertile ground for insecure jobs – a trend that puts the advent of a social Europe on ice indefinitely.”

“It is easy to dismiss the demonstrations that took placein Brussels and across Europe yesterday as irrelevant, venting the anger of the impotent,”comments The Guardian. “And yet John Monks, the general secretary of the European Trade Union Confederation, is surely right to argue that European governments should listen to its workers as well as its markets and that the rush towards austerity risks tipping a fragile recovery back into recession or stagnation.” So the English daily advises governments to “listen to their electorates when sharing out the pain”.

EUobserver, for its part, takes issue with the cliché of Europe’s overpaid civil servants: “The popular image of the Brussels gravy-train ignores the fact that thousands of EU secretaries, porters and other junior staff take home just €1,400-or-so each month and work on temporary contracts with no job security.” The European news site quotes Simon Coates from the EU Council's FFPE union: "EU salaries [for low- and mid-ranking officials] are no longer competitive. There are no good career prospects here, so we are finding it hard to recruit people from countries such as the UK, Sweden or Germany.”

And over in Germanythe Tageszeitung bemoans the dearth of German demonstrators on this day of pan-European protest: “When social struggles and redistribution issues are the order of the day all over Europe, only a handful of activists [from the anti-free trade Attac network] are keeping the flag flying.” The left-wing daily urges the unions, which represent some six million employees, to mobilise against the impending reforms to pensions and unemployment benefits instead of “remaining tied to Mrs Merkel’s apron strings”.

"What else can the average European do but protest?"

Down in Portugal, the CGTP union "marshalled 70,000 protesters” and "threatened a general strike”, reports the Lisbon daily Público, citing a union official as saying that will be the likely upshot of the austerity measures recently decided by the government.Those measures, announced the same day, include 3.5% to 10% cuts in civil service pay and a VAT increase from 21% to 23%. The daily adds that "while thousands of people rallied in Portugal, Spain [see below] and Belgium […], only a couple hundred people turned out” in countries like Ireland and Greece “that face heavy cutbacks ahead”. "Over there,” observes the paper, “people’s desires have been stifled by harsh reality. That hasn’t happened here yet.”For De Volkskrant, the demonstrations run the risk of failing to achieve their intended impact. Governments "appear to be unimpressed" by the marches, and significant national differences will prevent the emergence of "a true solidarity between European wage earners". Another Dutch newspaper, NRC Handelsblad compares the 100,000 demonstrators who turned out in Brussels to the anti-Obama Tea Party movement in the United States, and describes the march as "an impotent gesture." The Rotterdam daily argues that austerity measures are not the fault of the EU, but of countries "that have failed to manage their budgets", and insists that the euro project "must be allowed to succeed". For that to happen, it believes that "member states must assume the consequences" of their behaviour.

In a similar vein,Polish newspaper Rczespospolita attacks the strikers: "They want the state to provide them with short hours and high wages, preferably in civil service jobs. And at the same time, they want the state to cover the cost of dental care and schooling for their children. But what happens when the money runs out? They refuse to believe it. 'Make the bankers and the managers of major companies pay! Budget deficit? What budget deficit?' The shop-floor heroes have sent a clear message to Europe’s leaders: governments still have time to come up with a policy which does not involve any further austerity".

“The next 30 years could go down in history as a three decade-long calamity,"argues Le Soir. For the Brussels daily, how are average Europeans expected to respond when they are told that their retirement will be reduced, and their health care will become more expensive? How should they react when they will have to work more and earn less so that companies can remain competitive and generate sufficient profits to attract investors? (...) The only option that is left is to demonstrate in the streets. And that is exactly what 100,000 did on Wednesday in Brussels.”

"The general strike that almost was," declaresLa Vanguardia. Like most of the Spanish press, the Catalan daily highlights the relatively limited impact of yesterday’s walk out, and notes that "the unions were unable to mobilise the services sector, and failed in their bid to paralyse cities". However, they were much more successful in in the country’s factories. According to the unions, close to 70% of wage earners went out on strike, while “the government has refused to enter into a debate on figures". The strike broke new ground in as much as it "took place against a backdrop of economic crisis, and it was the first strike to target the government of José Luis Rodríguez Zapatero", which has tradtionally maintained close ties with unions. The newspaper notes that "in spite of the varied response to the call to strike, the unions have shown their determination to oppose reforms and budget cuts that punish the less well-off and limit workers’ rights."