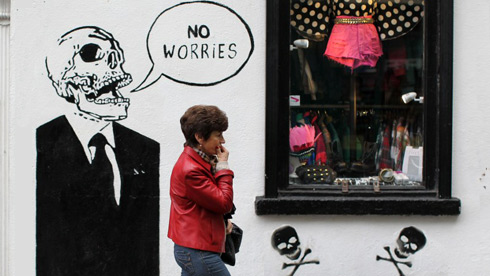 Ireland awoke on December 16 finally free of three years of crippling troika economic planning. However, despite financial sovereignty returning to Dublin, the country will find that just as events drove much of the crisis, so too will they drive policy in the post-troika era.

A shopper passes a graffiti-daubed store in Dublin, Ireland. Despite the departure of the troika's Men in Black, the country is still gripped by austerity

At the height of the financial crisis, I attended a drinks party at the house of one of the many people who were hired to fix the nation's finances.

At the end of the night, the door was flung open and five guys sashayed across the floor in a fashion that lead me to believe they had just stepped out of the 'Men In Black' movie.

I enquired as to who the new guests were and was told that they were the "IMF and ECB" inspectors who were over to check on our progress.

The boys in their black suits and slicked-back hair oozed confidence.

While the rest of us looked grimly into the bottom of our glasses, they happily and somewhat smugly held court at the party and informed us where the country went wrong and that the road ahead would be a tough one.