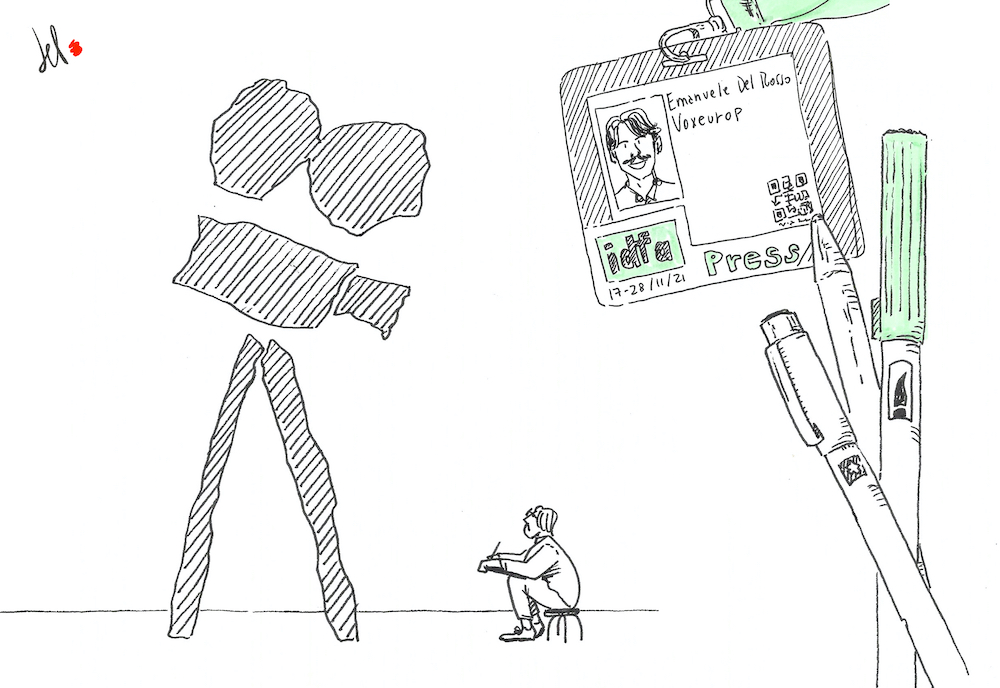 We and our empty trenches: A journey through a new Europe with the International Documentary Festival

During his journey through the IDFA, the International Documentary Film Festival of Amsterdam, editorial cartoonist and illustrator Emanuele Del Rosso sought through drawings and interviews the answer to a simple but huge question: What can documentaries teach Europe and its citizens?

It was early October when a friend reminded me IDFA was about to start. After a hiatus of one year due to the pandemic, documentaries were back in Amsterdam. It was big news because IDFA is an institution, in the Netherlands. The festival has been around since 1988, bringing together directors, experts, lovers, and, more broadly, people that are fond of the documentary medium.

Its numbers are big as well. For this 2021 edition, 264 titles from more than 80 countries are being screened. And the festival takes place throughout the city, in different locations, from historical cinemas like Pathé Tushinski to museums and deconsecrated churches.

It is one of the Meccas for documentary lovers.

I had this question in mind since beginning this reportage. I’ve been reading far more news than I should, lately – probably because of the pandemic – and all the gloomy headlines on the European media really got to me: coronavirus, heightened tensions between European countries, walls being built – both metaphorically, against women’s rights – and physically, to keep migrants out of Europe and in the cold – to be used as pawns in a conflict which is not their own

The question of whether documentaries can help us understand each other and understand ourselves is an important one because it speaks about knowledge. As Sergei Loznitsa, winner of IDFA Best Film award for Mr. Landsbergis said: “The biggest disease is fear: it's dangerous for people who lack knowledge, and makes it difficult for them to find a place in the world.”

So I set out at IDFA to try and understand if this festival has some knowledge to share with me, whether it comes from the voice of the people that populate it, or from the movies screened during these two weeks.

And doing so, I brought my sketchpad, to try and realize a drawcumentary, to go beyond the facemasks and the capacity of the cinema halls, to use my medium to understand IDFA.

I then identified a list of movies that felt relevant to me. They touch on themes and issues that are crucial for Europe. Some tell personal stories from specific countries, others record incredibly important historical events, and all seem to transcend the boundaries of the places they are set in, allowing them to speak to a broader audience.

My research was fully personal, I want to stress this. I do believe everyone goes searching for the answers to their own questions. In seeking mine, I tried to identify some shareable insights that can help us navigate rough times.

Here’s how my journey went.

Nous: A story of integration

Nous - French for “we” – was the first movie on my list. It is a documentary by Alice Diop, an author and by no means a novice to the documentary medium or to international crowds.

This film is a story of integration, or better, the failure of it. And the opposite of integration here is not “rejection”, but dis-integration. The disintegration, slow and painful, of the social fabric of Paris, where the masses are pushed at the edges of the city.

“We” live our lives, in the suburbs, while the center, which is also the high, the elevated, the nearer to God, glorifies its past.

There’s a scene shot in a Parisian church. A mass is being celebrated to commemorate the last days of Louis XVI, the last French monarch. In his letter, which is read by the priest out loud, the fallen king forgives the brutal crowd that imprisoned him, stating he never intended to make anyone suffer. Everyone attending the mass is white and old, and they all, in a slow procession, enter the catacombs under the church, burying themselves alive while, outside, life continues.

Europe is enamored of its rituals and nostalgia for shattered splendors, while a new generation of Europeans – because that’s what they are and those who don’t believe this should come to terms with reality – grows around a center that is losing its meaning, a center that is becoming empty.

From one empty center to another. Hito Steyerl realized this documentary in 1998, examining the large portion of land between former East and West Berlin - after the wall came down in 1989.

It’s impossible not to see a red line that connects the Berlin Wall to the present times. I spoke to Steyerl about how the film remains very relevant to contemporary Europe, how history often repeats itself.

Here’s her answer: “In the 90s, the border of Europe was the Polish border, and now it is Belarus instead. And now they are planning to build a new wall. There is not even a discussion on this, 25 years after a wall falls, a very similar wall is rebuilt and there is no discussion of it.”

Steyerl is talking, of course, about the Belarus-Poland situation. Belarus dictator Lukashenko is using migrants as a weapon, targeting the Polish border with them, as a retaliation maneuver against the recent sanctions imposed on Belarus – for when he ordered the hijacking of a commercial plane in order to arrest an opposition journalist, Roman Protasevich on Belarusian soil.

The Empty center’s beauty remains clear in the ominous message the Berlin wall brings with itself. At the very beginning of the movie, a young boy of Asian origin states that, for him, it would have been better if the wall hadn’t fallen.

Europe’s problems didn’t end with the fall of the Berlin Wall. Like Steyerl says in her documentary that “everything is built on ruins,” but also “boundaries and borders shift constantly” This means they won’t just disappear.

I had the chance to sit down with Paola Piacenza for a long interview, which allowed us to talk extensively about her documentary, The Home Front: A journey through Italy with Domenico Quirico.

Quirico has been a war correspondent for his whole career and in this documentary he moves to yet another front, right into his own country - which is mine as well - Italy. There are no wars there, at least not in the strict sense of the term, but Piacenza and Quirico have approached the issues in the same way they would have if Italy was a war zone.

The result is an intense journey through a difficult Italy, which is as real as the sense of abandonment one feels when Quirico moves around the deserted FIAT Mirafiori factory in Turin - once the embodiment of Italy’s industrial power.

And post-industrialization in this documentary also means post-education, post-realization, post-employment, and, sadly, post-welfare.

I asked Paola if such a documentary could be realised in another European country.

“For sure,” she said. “The issue of poverty is common to everyone. Yesterday a person from the public asked me how I feel about showing this documentary to a country as rich as the Netherlands, but I am certain there are areas of poverty. And, right after, I spoke to a Dutch filmmaker that told me he is making a documentary about those very areas.”

“I think it is important to raise questions rather than give answers. And I have seen the reaction of the public. They were very curious about the topic, they wanted to know more. And it was a largely European audience.”

I had to watch this movie at home, so I couldn’t draw anything – drawing from video wouldn’t be in the spirit of my drawcumentary – nor speak to the authors, but I decided to include it anyway. First of all, it is a beautiful documentary, and secondly the themes it touches have great value.

Trenches brings us into a war, the one fought at the Ukrainian border between Ukrainian troops and separatist troops, backed by the Russian Federation. Loup Bureau, the author of the film, follows a small squad of soldiers on the front lines of Donbass and shares with them their boredom, fear, hopes, and a little bit of politics, as well.

The sergeant of the squad, interviewed by Bureau, shares his view on the conflict: “ The Russian Federation is pulling the strings and we can only ask the EU countries to help us and put pressure on the Russian Federation. But European politicians are powerless assholes [...] Why do they lift sanctions? Why do they talk to them? The reason is always the same: everyone is after money.”

The Russo-Ukrainian war is the last conflict fought on European soil. It started in 2014, and it claimed the lives of over 15,000 people, more than 3,500 of which are civilians. We often forget that war, the physical kind, fought with guns grenades and tanks, hasn’t left Europe yet.

Conclusion: The answer to my question

This drawcumentary of mine was an intense experience.

I watched some powerful films, and I was confronted with stories and realities that are hard to accept as a reality in contemporary Europe. Nevertheless, these are part of our lives here and need to be embraced, accepted, or confronted. I felt a certain resistance within myself, I will admit, and I think it comes from the fact that I am, too, fond of a certain idea of my continent – I am, after all, a white Italian male with a degree in Philology and Literary Criticism.

But I feel I have learned something. I received pieces of knowledge both from the documentaries and from the people I interviewed. Therefore, I want to close this reportage with two quotes that summarize my main findings.

Orwa Nyrabia, IDFA artistic director: “Reality is complex, but also overwhelming, and our world is not made of one good and one evil, but of an infinity of goods and evils. Anything that can help us process the reality we live in, is important.”

Paola Piacenza, author of The home front: “Documentaries put the finger where it hurts, and that's what we need. The overdose of low-quality, stereotyped images, is offending our eyes and is depriving us of our critical spirit.”

I drew more than could fit this piece, so here’s a slideshow of scenes I, one would say if this was a documentary, cut: