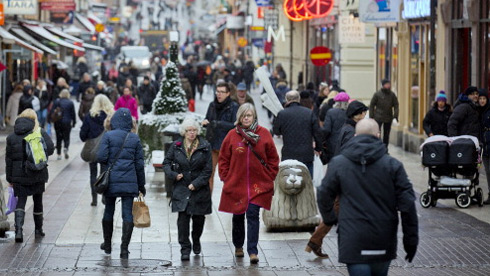 Egalitarianism isn’t what it used to be

According to the OECD, Sweden is no longer the egalitarian society it once was. The rich are getting richer and the number of poor is growing, even if they are not as poor as before. But this change may not be negative, says Swedish daily Göteborgs-Posten.

The news that the inequality gap is growing, and growing quickly, in Sweden, exploded like a bomb. The number of poor people has doubled in the last few decades, and has causing much newspaper ink to flow. This data is gleaned from a May 14 Organisation for Economic Cooperation and Development (OECD) report on income distribution in the organisation's 34 member states. Yet, the document does not find that people's lifestyle has deteriorated.

On the contrary. In the long term, every level of the population has seen an improvement in living conditions. But some people have seen greater change than others, leading to a rise in inequality. Especially between those who work and those who do not. As a result, Sweden plummeted in a list of the world's most egalitarian countries, from first place to 14th.

This is nothing to be worried about.

The aim of several recent tax reforms was to reward work. The gap in disposable income between workers on the bottom rung of the salary ladder and the unemployed was very slight – and this posed a problem.

Leaving the bosom of the state

The situation was unfair. It was necessary to adopt measures aimed at encouraging people to leave the bosom of the state and to provide for themselves. Although a range of variables influences decisions made by these people, the financial factor must not be under-estimated.

The more people are encouraged to work, the better it will be. After all, it is the contributions from the active working population that allows the state to continue. That is why the reforms noted by the OECD are, essentially, a positive signal.

It would be natural to say that a rising number of poor is unacceptable. And it is unacceptable if the poor are defined as citizens who do not have enough to eat or a roof over their heads. Or even if it includes people whose standard of living is far below that of the average Swede. However, this is not the type of poverty – absolute poverty – that the OECD is measuring. It is instead relative poverty.

This notion is actually nothing more than an exercise in accounting. Relative poverty does not take into account people's quality of life – it only measures disparities in income. In a world of billionaires, the millionaires would thus be ranked with the poor.

Another currently fashionable notion is "material deprivation". Under this definition, those who do not own, for example, a washing machine or a car or do not have the means to go on holiday abroad, are considered poor. It goes without saying that such a concept of poverty is laughable.

Let us not forget that Sweden still remains, in spite of everything, an egalitarian country. The only one that has broken with the tradition of a very small group of very wealthy people. In addition, the lowest level of poverty level remains relatively high. And that is what is important. In other words, not everyone needs to have it incredibly good. But no one should have it bad.

A link between inequality and riots

Swedish tabloid Aftonbladet, says that there can be no doubt that there is a link between the riots, which began last weekend in the Husby neighbourhood of Stockholm, and the inequality gap – which has widened in recent years under the conservative Alliance for Sweden government led by Prime Minister Fredrik Reinfeldt.

Husby is the symbol of the changes that have occurred in Sweden due to the Alliance's policies. Rising inequality and growing injustice result in conflict. This should come as no surprise. The empathy Reinfeldt is now showing is nothing more than communications hype and is not reflected in his policies. For the next general election [scheduled for September 2014] the PM has announced more tax cuts and no policies to reduce the income gap. Husby is but the latest consequence of a society on the verge of collapse, where armed gangs impose their rule, where trust in authority is declining and where the citizens are caught between the two.