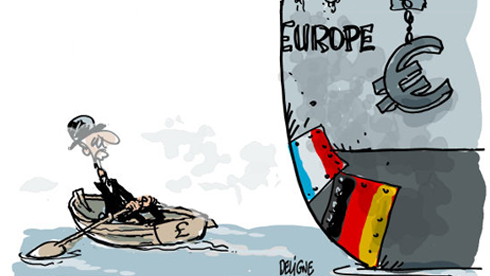 EU exit would lead to less sovereignty, not more

As a poll shows 56% of Britons in favour of a straight EU exit, the British Sunday newspaper argues that the consequences of such a withdrawal would be dire.

Britain appears to be almost inexorably set on a course that will see it cease to be a full member of the European Union. Today’s Observer opinion poll, suggesting that, offered a choice in a straight in/out referendum, a two-to-one majority of Britons would be inclined to leave is but another indicator of the strength of anti-European feeling. It is now almost certain that both of Britain’s principal political parties will feel obliged to offer such a referendum in their manifestos for the next parliament, triggered by the Tories’ anxiety to defend their flank against Ukip and Labour’s need to match them to appease the wave of Euroscepticism. Unless Europe suddenly becomes more attractive or pro-Europeans can make a stronger argument, the result of any referendum could look inevitable.

The only qualification to that assumption might come from either party in government being able to offer the referendum on a renegotiated relationship with more powers ceded to Britain. On that thin reed, dependent on the goodwill of European states who no longer trust Britain’s interest in building Europe, hangs our European future. We will either be a semi-detached member – or not a member at all.

The likelihood of a complete exit will be brought one step nearer by this week’s European summit, where 27 states are trying to agree the EU’s budget for the next seven years. Agricultural spending used to account for the lion’s share of European spending; now, the bulk of expenditure goes towards the infrastructure of poorer members, on research and development, and on the implementation of pan-European initiatives such as the proposed banking union. A freeze in spending, given the acute needs of southern and eastern Europe, is unlikely; probably the other 26 will settle on a small, real-terms increase.

Britain will not concur. David Cameron, locked between his own increasingly confident Tory backbench Eurosceptics and an opportunistic Labour party that has put tactical advantage before principle, knows that he cannot get such a deal through Parliament, nor can it survive the hysterical scrutiny of the overwhelmingly centre-right Eurosceptic media. He will be compelled to veto the deal, entrenching the distrust between Britain and its European neighbours, and making any concessions even to win a referendum on a semi-detached relationship much less likely.

In his weekly Daily Telegraph column, Boris Johnson argues that in a context of all round austerity, it is “amazing” that the European Commission is seeking a 5 to 6.8% increase to its budget. The outspoken Mayor of London has “no doubt” either that at this Thursday’s Brussels summit, British PM David Cameron —

… will veto this package, and not only will he have every sensible person in this country — and in the rest of Europe — cheering him on, he will be right politically, intellectually, morally and on just about every ground that you can imagine.

Central to Johnson’s argument is that some €5.2 billion of that budget is lost to “all-purpose crooks who are in receipt of funding from us all.”

This is a budget so riddled with fraud and malpractice that in 18 years it has never been given a clean bill of health by the European Court of Auditors. […] There are fields that are forests that are meant to be farmed. There are forests that are meant to be fields, and we are paying subsidy for both. Last year the Commission itself confessed that EU spending on Romania — €515 million — had been almost all the subject of fraud or abuse of one kind or another. Hand on heart, said Brussels, it looked as though only about 10 per cent of the cash had got through to legitimate destinations.

[…] EU officials preside over a vast and larcenous abuse of public funds, and now have the effrontery to tell us that they need a massive above-inflation increase to pay, inter alia, for the great unreformed caravanserai between Brussels, Luxembourg and Strasbourg.