With its apparently unbeatable fares, the Irish airline has played an essential role in increasing European mobility. But what is the reality of low-cost travel in Europe? Having spent only 500 euros on flights, two journalists from Le Monde report on their experience of visiting nine countries in five days. 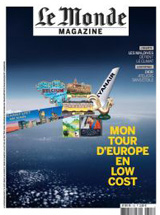 For just 500 euros, you can go on a tour of Europe that takes in nine countries in five days. Work on your tan (albeit briefly) on a Sicilian beach, see the changing of the guard at Buckingham Palace, and stroll through the working class bairros of Porto. In one single day, have breakfast in Latvia, eat chips for lunch in Belgium and treat yourself to tapas for dinner in Catalonia.

Such a voyage is only possible with one airline: Ryanair. In recent years, the press has been full of articles about the the leader of the low-cost sector — its recourse to hidden subsidies, its disdain for social insurance charges and its juggling of European regulations — a range of practices that have enabled the company to offer unbeatable prices to its customers who have never been more numerous (73.5 million passengers last year).

But you would be wrong to think that Ryanair users systematically stand to gain. The difference between published rates and the sums ultimately paid by travelers can be substantial. The prices indicated in this article, which are for tickets bought more than a month before departure, include a large number of extras: airport taxes, online registration charges, as well as administration costs for credit card purchases. A flight on board one of the Irish airline’s Boeing 737-800s — the company uses a single model of aircraft in its bid to cut costs — is a curious experience.

We decided that the best way to take stock of the reality of all of this was to embark on an intensive trip with Ryanair: to hop from airport to airport at a frenetic pace, travel to the city centres of the destinations concerned, tuck in to the in-flight menus, and talk to other passengers. We settled on a selection of nine flights covering an overall distance of 12,000 km. Fasten your seat belts: we are now ready for take-off.

An odyssey of this kind could only begin in Beauvais, the promised land of low-cost airlines, which we reached, in line with the recommended procedure, via an hour and fifteen minute bus ride from Porte Maillot, some two hours before the take-off of our first flight (for Sicily). Killing time between airport terminals that are well off the beaten track is part of the standard experience for thrifty travelers. That said, the two hours are not wasted, because you have to check and make sure that everything is as it should be, in particular the boarding pass that all passengers are obliged to fill in for themselves on the Internet: if you neglect to do this, it can always be printed (by Ryanair) at the airport, at a cost of 40 euros which is quite a lot for a sheet of A4 paper. The same amount is demanded for any piece of hand luggage that does not comply with the dimensions (55 cm × 40 cm × 20 cm) and weight (10 kg) authorised by the company.

The previous evening, Paolo the photographer and I had spent some intense moments swapping shirts and electronic equipment to balance the weight of our two carry-on bags, which we finally got down to 10.1 kg each. But would an over-zealous station manager give us a hard time over the extra 100 grams? And then what about the two centimetres of extra width on my suitcase? At least, Paolo, had nothing to worry about: he had bought the special “approved cabin bag” sold by Ryanair on its website for 79 euros, which is a quite a lot for a polyester case.

But that is the nature of the airline business: stressed out passengers are good payers. And Ryanair has pushed this equation to its outer limits by developing a whole range of services of dubious utility: booking confirmation via SMS, priority boarding, and in-house travel insurance that demands a considerable effort of concentration on the part of canny customers who do not want to pay for it — the “No Travel Insurance Required” setting is conveniently placed in a drop down menu, between Latvia and Lithuania.

At Beauvais on the morning in question, the absence of strict controls — or even naked-eye inspections — was almost disappointing. Perhaps all we have heard and read about Ryanair’s legendary “firmness” was only fiction? We decided to remain patient, and to see if we could learn more from the other travelers waiting in line.

By chance, the couple just ahead of us had a story to tell. Clémentine Courbin and Redouane Abdat, both post-graduate business students at Paris-Dauphine, were initially pleased with the deal they had obtained a week earlier: two Beauvais-Trapani round trips for 200 euros. Unfortunately, for some unknown reason — perhaps a data-entry error or a computer bug — her first name finally ended up where his surname should have been on the booking form. Correcting the error on the ticket cost them an extra 100 euros. “We called the help desk, which is a call centre in some other country where people just read out pre-written answers. We were in good faith but they didn’t want to listen to us. This is the first and last time that I will be traveling on Ryanair,” grumbled the young woman.

Instead of sleep – electronic cigarettes and scratchcards

Having arrived in Trapani, not far from where NATO Mirage jets were taking off to bomb Libya, we took a trip into the centre of the small Sicilian town, which is quite charming, before returning to the airport that evening for our next flight to Frankfurt-Hahn.

The second flight was identical to the first (and those that came later), the only difference being that it was at night. Getting a little sleep in a jet emblazoned with the signature Celtic harp (Ryanair’s logo) is no easy matter, and the non-reclinable seats are particularly hard on your back at the end of the day. But logic dictates that you have to cram in the maximum number of people into a plane to keep prices low, and they could be lower still if the company decided to sell standing-room — an idea mooted in 2009 by Ryanair’s feisty CEO Michael O’Leary.

Sleep is also hampered by the fact that every 10 to 15 minutes the cabin crew try to “sell” you something. Twenty percent of Ryanair’s turnover (3.6 billion euros) comes from additional product sales. We will not dwell on the taste of the sandwiches, which was inversely proportional to the high price we paid for them. But on Ryanair, you can also buy electronic cigarettes — “Great news for smokers!” announced the weary hostess — telephone cards (that fired the imagination of the young steward who wished to save us from “the astronomical prices” we pay for mobile phone calls) and scratch cards for the “fantastic” lottery organised by the company, which pays some of its proceeds to charity.

But the one must-have item— which “you have probably seen advertised on television” – is a rubber watch “infused with Tourmaline, a natural mineral” that offers —and we are quoting here — “improved sleep” and “relaxation,” and more importantly “natural detoxification of the body.” We decided to celebrate this 12-euro purchase with some extraordinarily rubbery tomato and mozarella paninis, consoling ourselves with the notion that we had nothing to fear. After all, the watch would take care of that.

Translated from the French by Mark McGovern