In an attempt to reassure markets of their support for the European financial stabilisation fund, Angela Merkel and Nicolas Sarkozy met again in Paris on August 16. The lack of agreement on drawing up common European government bonds, however, leaves the European press sceptical about the euro’s performance. 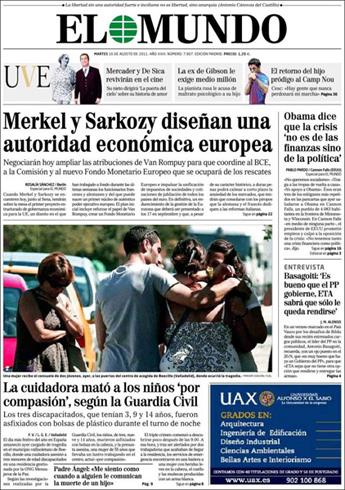 “Merkel and Sarkozy are sketching out a European economic authority,” suspects El Mundo, reporting that the German chancellor and French president were to discuss the “first draft of an economic governance structure for the EU”, which could give rise to the “nucleus of a genuine European executive power”, and would also discuss the path to a common fiscal policy. In short, the Madrid newspaper concludes, this is a “strengthening of the management of the eurozone”, which will be presented to the 17 member states of the single currency in September but which will not be enough to calm the anxiety of the market in the short term. 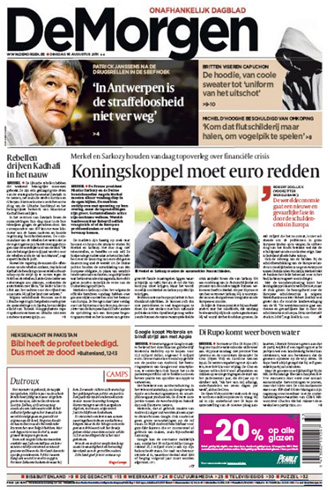 “The royal couple is expected to save the euro,” writes De Morgen, taking a contrary reading. “They will have to look deep into each other’s eyes” to come up with any initiatives capable of soothing the financial markets. “The duo must not disappoint, and they know it,” adds the Brussels daily, aware that the French president and German chancellor will have to keep their constituents in mind at the same time. At the national level, after all, their popularity has taken some hits: “They cannot afford to make too many concessions that go against their national political careers.” 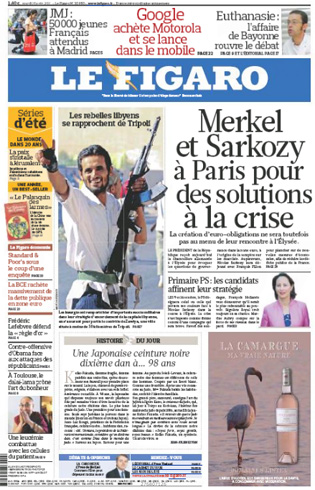 It’s precisely the delicate predicament facing Angela Merkel in Germany that worries Le Figaro. “The majority of the German national deputies [are] offended,” explains the Parisian daily, “at being confined to the role of rubber-stamping the major decisions on the euro zone”. Upshot: the aid package for Greece that was approved in July will not be adopted in September, as Merkel had promised her European partners. “The Bundestag [Germany’s National Assembly] will decide for itself how much time it needs,” insisted a CDU deputy, whose remarks are reported in Le Figaro. Defections to the right should not prevent the adoption of the plan. But “the chances of the Chancellor of standing up for re-election in 2013 will be weakened,” the paper concludes. Another sensitive issue, that of European treasury bonds, is a taboo subject among the government allies, the Christian Social Union (CDU) and the Liberals (FDP). “The FDP is threatening to break up the coalition if the Christian Democrats start taking it down this road. For the eurobond option, it appears, is beginning to gain ground within the conservative party.” 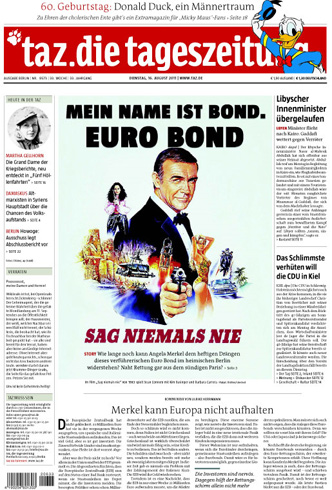 “My name is Bond – Eurobond,” leadsTageszeitung. “We must act now… Eurobonds could prevent speculative attacks against certain countries. The federal government still hopes to avoid eurobonds via the rescue funds, whose capabilities have been expanded. But Angela Merkel can say goodbye to this solution,” the Taz goes on. Despite the rescue plan, the fact is that “investors will panic. Even before it was extended, the bailout had already failed. The ultimate solution lies in the ECB – or in eurobonds.”

On the same wavelength, the Süddeutsche Zeitung is convinced that “Germany must pay” and quickly, to salvage the common currency. “There is no alternative to eurobonds and a true stability pact,” writes the Munich newspaper. “The German chancellor is reluctant, however, because she would lose two important things: her coalition allies (CSU and FDP) and her constituents.” 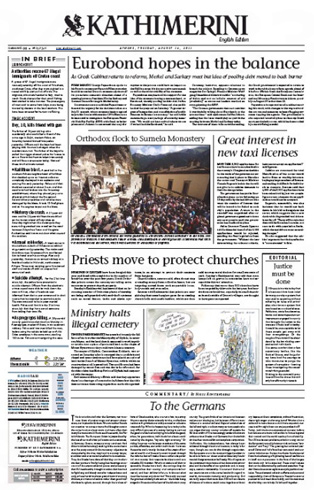 In Greece, the government “is continuing to press for the adoption of eurobonds, but hopes are fading,” writes Kathimerini. According to the business daily, there is, in fact, little chance that Paris and Berlin can agree on this point. The newspaper is also launching an appeal to Greece’s “German friends” to make a gesture of solidarity with their partners. “The times call for collective efforts and personal responsibility on the part of all Europeans. Those in a position to lead must do so with determination, and the others must do what they can. So let’s all pull together.”

Der Standard, finally, believes that any notion of eurobonds is premature: “Eurobonds are a good idea, in principle,” writes the Vienna daily. “The debate, however, has come too soon. The decisions of the last EU summit [on July 21] have not yet been implemented. Nobody knows what they are really worth. If Angela Merkel and Nicolas Sarkozy come out of their meeting in Paris today without any decision, it would be far from being the worst outcome. Sometimes, just waiting and sipping one’s tea can turn out to be the best strategy.”