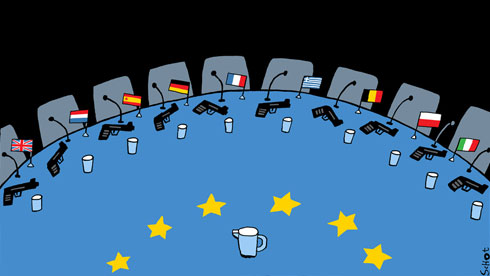 On the sidelines of the Brussels budget summit on November 22 and 23, Eurozone leaders approved the appointment of Luxembourgian Yves Mersch to the board of the European Central Bank. But he was elected despite the European parliament voting against him, a move which highlights the EU's dysfunctional nature.

Everyone agrees that Europe suffers from a democratic deficit and a lack of legitimacy which alienate its citizens. That is everyone except for the heads of Eurozone governments, who, notwithstanding a European parliament vote to the contrary, quietly appointed Luxembourg’s central bank governor, Yves Mersch, to the board of the ECB when they met for Friday’s European summit.

With the appointment, the European Council has provided proof of the true value of a European parliament, which, with the adoption of the Lisbon Treaty, was supposed to exercise “real” power.

The reason for parliament’s rejection of Mr Mersch's application – his gender – hardly matters. You might even argue that it was not valid. But, in a democracy, you cannot ignore a parliamentary vote. It is a golden rule which is far more important than a guideline for the management of budgets. However, it is not one that has been set down in European treaties.

Yves Mersch’s arrival on the board of the ECB highlights the extent to which Europe has been steered in the wrong direction by heads of state and government who are determined that only their voices should be heard.

The trouble with this attitude is that it results in difficulties which are a lot more problematic than the appointment of a Luxembourgian banker. The disastrous management of the debt crisis, which for the last two years, has sought to treat a serious financial hemorrhage with plasters that have offered at a series of “last chance summits”, is a case in point. And the Eurogroup’s recent failure to find a solution for Greece, which is supposed to be fixed on Monday, is yet further proof.

The establishment of a proper European parliamentary system could be the means for the creation a Europe-wide sense of community which is sorely lacking.

It would encourage greater responsibility on the part of voters, political representatives and heads of state that would certainly be for the good. It is galling to think that the same heads of state who have wiped their feet on the vote by the Strasbourg parliament will tearily deplore the mass abstention that will inevitably mark the next European election and sigh over “the illness that is eating away at our democracy.”

In reality, the decision to appoint Yves Mersch is a lot more worrying than it might appear, because it marks the victory of a certain idea of Europe. On the level of monetary policy, it has brought a hawk onto the board of the ECB — a hawk who will be the voice of the Bundesbank, and who will likely cite the need for “stability” as his reason for acting as an internal brake on the ECB’s necessary contribution to management of the crisis.

On the issue of representation in Europe, the arrival of Mr Mersch will confirm a definitive decision to remove the permanent Spanish representative from the board of the ECB, which is why Madrid has spoken out against the appointment.

We should not kid ourselves: Spain’s financial difficulties are the reason for its expulsion. In other words, this means that countries caught up in the economic crisis will be treated as second-class states. Or worse still, Europe’s heads of state and government believe it is useful to ensure a certain “north-south” balance on the ECB board, thereby reinforcing a certain “ethnic” vision of Europe. All of this bodes very badly for the future management of the continent.

The disproportionate weight of Luxembourg

Finally the appointment of a native of Luxembourg, whose prime minister is already at the head of Eurogroup, will add to the disproportionate weight of the Grand Duchy in European institutions.

It is not a matter of refusing to acknowledge that the subjects of His Royal Highness Henri of Luxembourg might be a little more gifted than the rest of us, but at a time when the European Commission has taken issue with the small state’s reluctance to join in the fight against tax havens, and at a time when larger countries are struggling to clean up their finances, the influence of Luxembourg cannot be described as neutral.