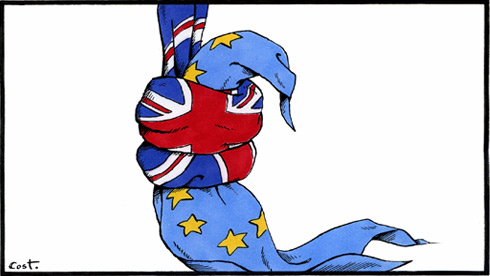 The UK audit of relations with the EU is coming up with awkward answers.

There have been some glum faces around David Cameron’s cabinet table of late. To the chagrin of some eurosceptic colleagues, the government’s much-heralded audit of Britain’s relations with the EU is coming up with the wrong answers. Brussels is neither sucking the lifeblood from British democracy nor stifling its economy with unnecessary regulation. For all its inevitable irritations, the Union seems to be serving the national interest.

The government has published the first tranche of reports in a comprehensive review of Britain’s EU membership. This first batch includes studies of the “balance of competences”in the single market, tax policy, foreign policy and defence, food safety and animal welfare, health and development. Given the political sensitivities within the coalition –Nick Clegg’s Liberal Democrats do not share widespread Tory hostility to most things European –the task in large part has been in the hands of neutral civil servants.

The result is a series of reports that tell the story as it is, shorn of ideology and political judgments. This is what persuaded the prime minister to defer publication until backbench Tory MPs hostile to the EU had safely departed Westminster for the parliamentary recess. Mr Clegg wanted the reports released at a ministerial press conference. Mr Cameron’s office insisted there should be no fanfare.

Pro-Europeans seeking a knockout blow in favour of the EU status quo will be disappointed. Though the reports say the single market has provided significant advantages for the British economy, they also acknowledge the difficulty of quantifying the gain. And while business backs the level-playing field legislation needed to make the single market work, there is less of a consensus around environmental and social regulation.

The Daily Telegraph recalls that the review handed to the prime minister aimed to outline the relationship between the UK and the EU. But the Eurosceptic daily notes the reports also “intended to demonstrate the alarming extent to which Europe’s tentacles reach into our governance – to make the public share the alarm and despair of those who have to wrestle with its directives on a daily basis.”

In addition, The Daily Telegraph notes that the reports reveal –

the extent to which Whitehall is not only enmeshed with Brussels, but comfortable with it. They were written under the partial supervision of the Foreign Office, long a bastion of Europhilia, at the behest of a prime minister who clearly favours an In rather than Out vote, in the event that suitable concessions can be won. The documents published yesterday, therefore, go out of their way to acknowledge Europe’s benefits.