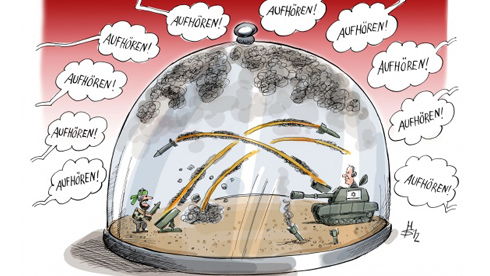 Left on the sidelines by the Arab Spring, the EU has not found its voice in the renewed conflict between Israel and Hamas in the Gaza Strip. It is as if the EU has given up on playing a role in a region that is in its own backyard.

The escalating war between Israel and Gaza confirms the arrival of new players on the scene, come to restart efforts at mediation to end the violence. The initiative lies with an Egypt that has broken with the Mubarak era, a Turkey that continues to consolidate itself as a regional power, and Qatar, a newcomer to the international scene, but with sufficient means and interests (political, strategic and religious) to claim a seat at the negotiation table. The changes brought by the Arab Spring are evident for all to see.

And Europe? It’s not at the table and isn’t expected to be. Its role in the conflict was to pay the bill the Palestinians could not pay, and that in many cases the Israelis would have had to pay. It was a role that it fulfilled neatly and that, deep-down, saved the EU some headaches. Now, it’s not that Brussels is reluctant to pay the bill. It’s that it can’t even agree to draft a press release.

On Monday, when theforeign ministers drafted the document, the UK and France advocated to ask Israel not to launch a ground attack, while Catherine Ashton, the EU foreign policy chief, supported by Germany, imposed her own point of view.

The Arab Spring left the EU on the sidelines

First, she condemned the rocket attacks from Gaza that are targeting Israel. Secondly, she defended Israel's right to protect its own people. And thirdly, she urged Tel-Aviv to "act proportionately and ensure that civilians are protected." That Gaza, the most densely populated zone in the world, is suffering from an Israeli blockade does not merit a mention.

The reality is that the operation launched by Israel, officially to stop the firing of rockets by hitting the rocket launch sites from the air and from warships, has killed at least 127 Palestinians, many of them women and children, injured more than 900, and destroyed several civilian buildings. Compared to the damage and the casualties caused by Palestinian rockets (three dead), none of that proportionality that Europe is demanding is much in evidence.

The Arab Spring left the EU on the sidelines. After talking repeatedly of the need for democracy in the region while keeping up its support for autocracies considered a lesser evil than Islamism, Europe did not know how to respond to the uprisings. It still doesn’t. Beyond signing statements that the reality on the ground reduces to empty rhetoric, the EU is de facto renouncing any role in resolving a conflict raging only a few kilometres away. It seems as if Europe has no interest whatsoever in the area, and it should have.