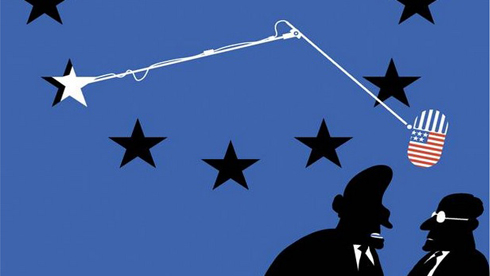 Should Europeans suspend free-trade talks with the US to protest against American eavesdropping in Europe? Not at all, writes the Frankfurter Allgemeine Zeitung. Such an agreement is Europe’s interest as it creates greater transparency between partners.

A shadow now lies over the negotiations over a trans-Atlantic free trade agreement that looked to set off on what seemed a promising early start during Obama’s visit. If it turns out to be true that the American intelligence service, the NSA, eavesdropped on America’s European allies to the extent claimed by its former operative Edward Snowden, this will certainly not encourage cooperation based on mutual trust.

US loses the moral high ground

“Europe’s public outrage over the latest revelations from Edward Snowden, the former National Security Agency contractor, is misplaced,” writes a Financial Times editorial, adding that: “Countries have been spying on friends for millennia.”

However, the scandal risks weakening more than simply the launch of next week’s EU-US trade talks, continues the economic daily –

The furore has weakened Washington’s credibility just as it is taking a strong stand against a rising tide of cyber espionage from China. EU outrage will only give further ammunition to Chinese critics who accuse the US of double standards. However, European companies and governments have also been targets. The EU would be making a grave mistake if it allowed this dispute over unpleasant but hardly surprising US snooping to divert attention from China’s cyber armies. Right now, that is the bigger threat.