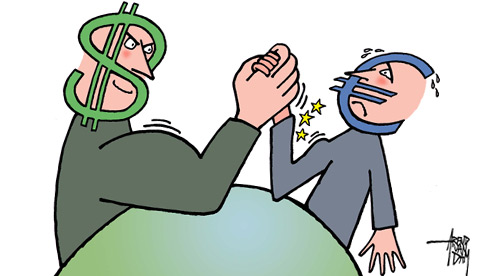 The EU-US trade deal will bring benefits to both sides, but will pose challenges to the internal trade for both sides, plus harm the economies of other countries, writes a Czech commentator following the publication of a report by the Bertelsmann Foundation.

The European Union and the United States are currently the largest trade and investment partners in the world, accounting for almost half of the global gross domestic product and almost a third of the volume of all world trade. If they do manage to work out an ambitious free trade agreement), commercial activities in all the EU’s member countries that deal with the US will see a sharp increase in business. Some traditional business ties within the EU, will, however, be almost sure to weaken. As a result, some states will become economically less dependent on the EU’s internal market, which will be one of the greatest achievements and most important benefits of European integration.

The EU’s single market, built on four basic building blocks – the free movement of people, services, goods and capital – is the largest economic zone in the world. Its creation eliminated scores of administrative and technical barriers between the markets taking part. Removing regulatory barriers to mutual trade with the US brings a certain risk of the diversification of trade links that would be caused by the loss of some of the current benefits that come from preferential treatment within the internal market.

If the agreement is signed, trade between Germany and the US could almost double. Similarly, total turnover in international trade between the US and Italy, Greece and Portugal is also predicted to increase. However, trading among the EU’s states themselves would suffer significant declines. Mutual trade between Germany and France, according to the estimates, would drop by up to 23 per cent, and between Germany and the United Kingdom by up to 40 per cent. Economic ties among the European states nevertheless play an important role, and to a large extent they are reflected in policy decisions taken in the context of European integration. It is the internal market’s benefits that can often be thought of as the glue that holds the community together. Naturally, the question of whether the drop-off in economic cooperation will have an effect on the unity of the union as a whole arises.

In this context, we must be aware that no matter how ambitious the agreement to dismantle a significant amount of regulatory barriers, it will probably not bring with it a degree of harmonisation as extensive as that which currently exists among the member states of the European Union. Talk about the possible emergence of a Euro-American Union or Euro-American United States is misplaced. The transatlantic free trade area may also help advance the project to complete the internal market and liberalise areas where certain partial barriers to mutual trade are still in place and over-regulation lingers on.

Making mutual trade between the EU and the US easier will not only bring an increase in trade, but also reduce production costs and purchase prices, which will be reflected in greater economic growth. Those who will benefit most from the agreement will be states that have traditionally strong trade ties to the United States, such as the United Kingdom and Ireland. Considerable economic growth, however, will also be felt in Spain and Italy, which to some extent will replace more expensive imports from the European Union with less expensive products from the United States. One intriguing outcome of the study is that the transatlantic partnership will not lead to a further entrenching of the economic differences between the traditionally strong northern states and those in the south, which has been hit hard by the crisis, but rather the contrary.

Successful negotiations on the partnership will open up new business opportunities for small, medium and large enterprises on both shores of the Atlantic, and so significantly boost the creation of new jobs. Increasing the volume of trade between the parties can, under the best scenario, give rise to more than one million new jobs across the EU. The most to benefit from those jobs will be the citizens of the United Kingdom, Germany, Spain, Italy and France. In times of crisis and rising unemployment, the agreement can become a relatively low-cost stimulus package to spur economic growth and boost employment.

‘Most important’ deal in history

The partnership between the European Union and the United States will become the most important bilateral trade agreement in history, not only in terms of the volume of international trade that would be subject to its rules, but, above all, in how it will influence international trade as a whole. The agreement between the two main drivers of the global economy will send a clear signal that both partners have enough clout to influence and to create new rules and standards of the global trade markets of the 21st Century.

According to the results of the study, the profits to the signatories to the agreement will, in essence, come out of the pockets of other countries. The biggest losses will probably be suffered by the “BRICs”countries (Brazil, Russia, India, China), whose exports to the European Union will on average be reduced by up to 10 per cent and to the United States by up to even 30 per cent. The weakening of their trade links with the EU and the United States can lead to significant economic losses in those other countries, linked to a rise in unemployment and a fall in real income.

Last but not least, the timetable has to be looked at realistically. The ambition to close the deal on the transatlantic partnership within two years is probably out of step with the complexity of the agreement. The direction and the dynamics of the negotiations we will soon discover. The United States are betting on the need for Brussels to bring some visible boost to the sagging economy of the EU. The EU’s negotiators, however, must bear in mind that the “open window of opportunity” to negotiate the agreement will shut with the end of the current American presidency. On both sides of the Atlantic, everyone knows that elections are not won by liberalising international trade.