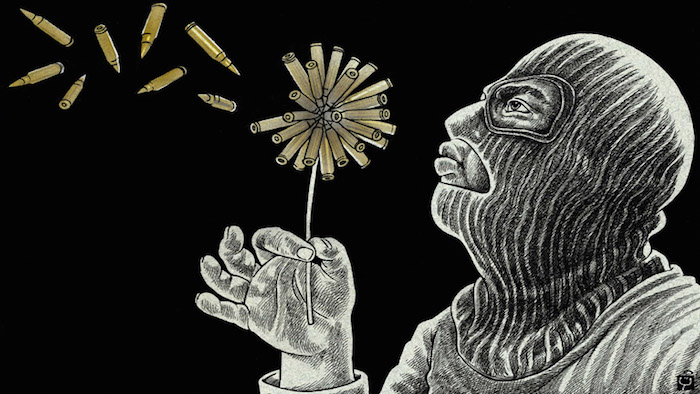 From Utøya to Charlie Hebdo and Copenhagen, the same challenge for Europe

The terrorist attack in Copenhagen on 14 and 15 February followed the same pattern as January’s shootings in Paris. It is nonetheless possible to observe parallels with another event that claimed to arise from a wholly different worldview.

On the eve of Copenhagen attacks, Norwegian author and journalist Asne Seierstad wrote that the Charlie Hebdo killers and Norwegian mass murderer Anders Behring Breivik displayed the same “cold indifference”, “brutality” and “choice of victims”, writes Norwegian author and journalist Asne Seierstad in Libération. But what most unites the Kouachi brothers and Breivik, who killed 69 young social democrats in a shooting rampage on the Norwegian island of Utøya in 2011, is their strategy —

The extremists and the terrorists, each in their own corner of Europe, met in their desire to change society through violence against civilians. And in the spreading of fear by this violence.

Seierstad warns against the different ways of establishing distance from each attacker. Upon learning the Utøya attacks were not the work of Islamist extremists but of a Norwegian, explanations shifted “from politics to psychology. We wanted the terrorist to be sick, so we could declare ourselves to be in good health.” Whereas such rationalisations are absent following the Charlie Hebdo attacks —

Certain groups want the guilt to be collective and for Muslims to be held responsible. In the worst-case scenario, the divisions will harden, Europe’s Muslims will become more alienated and the gap between us and them will widen. This, despite the fact that the terrorists represent a vision of Islam that revolts the great majority of Muslims. The guilt of white, allegedly Christian Breivik was individualised, even though he also belongs to a trend spreading across Europe.

It is worth considering, on the contrary, that the attackers had much in common on the psychological front: “Their feeling of alienation from their own society. The feeling of not belonging to the community. Absent parents, a weakened social link.” One response is “to ask ourselves what in our societies contributes to the creation of terrorism” —

Obviously, we cannot explain terror by unhappy childhoods. But studies show that violent criminals practically all have difficult youths. This is not to banalise, but to determine the society we want to build together.

Another common factor is the choice of victims “who participate in political debates” and who believe one must “convince one’s adversary, not force them to agree”. For Seierstad, the challenge following such attacks is to privilege greater democracy and humanity over greater social divisions, without naivety about the possible consequences.