The newly-appointed European Commission has just started getting down to business and is already re-opening the debate over genetically modified organisms, which remains a bone of enduring contention between member states, pressure groups and Brussels.

European Commission president José Manuel Barroso, whose team was officially approved just last week on 9 February, has already set out to sow the Union’s fields with genetically engineered crops. However, his plans to force through the authorisation of "mutant foods” have met with criticism in the press and staunch opposition from some of Europe's member states.

Launched back in 1996 as highly pest-proof “miracle produce,” transgenic crops have caught on with US consumers, but not with their Continental counterparts. Nonetheless, the Commission President is hell bent on pushing through legislation to green-light mass farming of transgenic corn and potatoes. Under pressure from the US and Germany, Mr Barroso is prioritising the authorisation of at least two varieties: MON810 corn produced by American biotech titan Monsanto — a product that is currently only accepted in Spain — and the Amflora potato "sponsored" by German industrial giant BASF, which is under experimental cultivation in Germany. Needless to say, the financial stakes are considerable: BASF estimates its annual returns on Amflora could come to between €30m and €40m.

Against this backdrop, the news agency Reuters believes that the replacement of Environment Commissioner Stavros Dimas, who is openly opposed to transgenic crops, with the less influential former Research Commissioner Janez Potočnik will make things easier for Barroso. However, the new Environment Commissioner will still have to grapple with reluctant national governments. Barroso already suffered a stinging political defeat, when 22 of the 27 member states voted against his request last year to authorise transgenic produce. More recently, a meeting of the European science committee to discuss the odds of approving transgenic corn on 10 February failed to break the deadlock on the issue. Although 13 EU member governments are currently in favour of transgenic produce, 11 remain categorically opposed. Ultimately, the question of GMO may end up being left to each member state’s discretion.

When it joined the EU on 1st January 2007, Romania was obliged to submit to Community legislation and give up its GMO soy-growing business. Only four GMO species — two types of corn and two types of carnations— are currently authorized for cultivation in Europe, which with the exception of Spain and Germany, does not grow or buy GMOs — a position that has led to a latent diplomatic conflict with the US, the world’s biggest GMO producer and consumer (72% of world production). In 2004, the Commission imposed a moratorium on certain transgenic crops – and required that GMOs be labelled as such.

In spite of the EU ban

GMOs contain genetic material obtained by other means than natural crossbreeding. The first "mutant" vegetable was a tomato, which first hit European markets in 1994 in the form of tomato paste. Genetically engineered soybeans and corn followed in 1996, then potatoes, rapeseed, wheat and rice. From 1997, US companies took advantage of a legal vacuum on the issue in Romania to introduce a series of GM hybrid strains of corn, soybeans, beets and potatoes. For financial reasons, Romanians accepted the produce without worrying about any attendant risks. The inner circle divvied up the profits, leaving Romanian consumers in the dark as to what exactly they were eating, and the country was subsequently accused of playing into the hands of the US and letting GMOs into Europe through the back door.

Over in Bulgaria, on 10 February parliament debated the prospect of legalising transgenic crops. Prime minister Boïko Borissov pledged “there would be no GMOs in Bulgaria” – albeit conceding that his country would be bound by Community law, whichever way it falls.

The secret life of GMOs 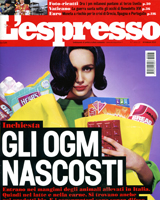 European legislation obliges food producers to signal the presence of GMOs in food products. However, as L'Espresso explains, the threshold for mandatory indication (0.9%) has meant that many foods containing small amounts of GMOs are not labelled as such. The Italian weekly also notes that transgenic soya and corn are commonly used in livestock feed. As a result, traces of GMOs "are found in many prestigious terroir or AOC (certified-origin) products like Parmesan cheese or San Daniele ham, which make no mention of GMO on their labels" — an oversight largely sanctioned by farmers' unions who benefit from the substantial cost reduction "of 20% to 30% on conventional feeds." The same unions are also critical of "contradictory" legislation, which allows for "the importing of GMO corn and soya and their use in food products, but imposes a ban on their cultivation." So consumers beware, "traces of GMOs can be found in snacks, soya-based drinks, breakfast cereals, flours, pastas, food supplments and even in tofu — one of the most popular items in organic grocery shops."