Report European Council
Herman Van Rompuy and Catherine Ashton: a future together at the top of the EU. Photo: Council of the EU

Herman who? Catherine what?

The appointment of Belgian Prime Minister Herman Van Rompuy to the post of President of the European council and British Commissioner for Trade Catherine Ashton as High Representative for Foreign Affairs has not been well received by the European press, which was hoping for more charismatic European representatives.

Herman Van Rompuy and Catherine Ashton: a future together at the top of the EU. Photo: Council of the EU 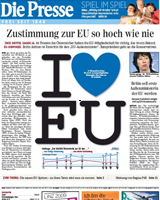 "Europe is stunned," announces Austria's Die Presse, taking issue with the appointment of two "unknowns" — or two "stop-gaps" as Der Spiegel dubs them — to the new key posts in the EU. In Portugal, Diário de Notícias, which is similarly unimpressed, notes that representatives of Europe's member states took only half an hour to elect the "anonymous duo who are almost unknown outside of their own countries" to the positions where they will now "take charge of the destiny of the EU."

"European leaders have adopted the suicidal tactic of basing an agreement on the lowest common denominator," complains La Repubblica, going on to lament the fact that "as Henry Kissinger put it, Europe has now been provided with a telephone number, but if we cannot field a better team to take the calls, no one is likely to dial it." For the Rome daily, anyone seeking "a face and phone number for Europe will call Angela Merkel, and shy away from Herman Van Rompuy and the even more avoidable Baroness Ashton." In Poland, Rzeczpospolita ironically introduces the new EU President to our allies: "Dear Americans, here's Mr. Europe 2009 — Herman Van Rompuy." The Warsaw-based daily expects the transatlantic line to his office to be abuzz with fruitful discussion on "the war on terror, CO2 emissions and the tackling the economic crisis." In a more bitter attack, another Polish daily - Gazeta Wyborcza - simply wonders "if it was worth fighting the battle for the Lisbon Treaty to hand the new jobs to two weaklings."

On the same wavelength, El País lashes out at the candidates' obvious lack of visibility and prestige. Under the headline, "An all too grey EU," it criticizes "Europe's heads of state for choosing a President with no talent for leadership, and for offering external policy as a gift to London. The result is sure to alienate europhiles and will do nothing to promote public confidence in Europe's institutions." For Diário de Notícias, "Europe has passed up a major opportunity to prove that the Lisbon Treaty could at last provide the political instruments that would enable it to exert a serious influence in world affairs." In a similar vein, The Guardian adds that Europe has missed "a valuable chance to halt the slide towards a G2 world, dominated by the twin poles of Washington and Beijing." 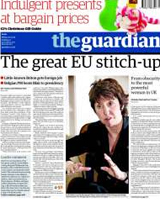 Many commentators also expressed concern over the manner in which the candidates were selected. "Two lessons can be drawn from the selection of these new top officials," asserts The Economist: firstly that "Europe’s national leaders are not ready to share the world stage with real rivals." And secondly that with "the Lisbon Treaty, those same national leaders have also ceded far more power than they realised to pan-European political parties," who imposed "the deal dividing up the two posts, backed by the threat that nominees not to their liking would not be approved by the European Parliament in a vote early next year." For the Daily Telegraph, we have "an undemocratic appointment to an undemocratic post created by an undemocratic treaty," which, according to The Guardian, is a signal that "Europe (has) quietly returned to its old ways. A Franco-German stitch-up in favour of an obscure Belgian is exactly how things traditionally worked – it is as if the Swedes, the Poles and the rest had never joined the club. There was no puff of white smoke, but the secretive manner in which 27 proud democracies reached the decision made the Vatican look almost transparent." 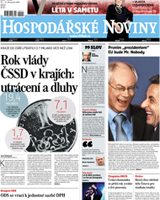 As to Herman Van Rompuy's pedigree, România Libera observes that "Belgian politicians are renowned experts in the art of negociation and compromise," who are distinguished by remarkable language skills and "by the skilful manner in which they manage to hold together a country as complex and eternally fractious as Belgium." The appointment of Van Rompuy has also been welcomed in the Czech Republic, where Hospodářské Noviny lauds his "strong personality" and his "perfect" qualifications for the job — a PhD in Economics and a diploma in philosophy. Mladá Fronta DNES praises his haikus, while Lidové Noviny compares him to the Czech Republic's own Jan Fischer, who was also "Mister Nobody" before being appointed Prime Minister. "Van Rompuy enjoys a reputation for self-deprecating wit," notes The Guardian, and reports that his "appearance of modesty is said to mask steely determination, sharp intelligence, and strongly held views which he seldom reveals. He does not suffer fools and can be withering in private about political opponents." The Daily Telegraph recalls that Van Rompuy "is also a hard-line opponent of Turkey's bid to join the European Union because, he has warned, it is an Islamic country and would dilute Europe's Christian heritage." As proof of Van Rompuy's stature as "a man of influence," Bucharest daily Cotidianul reminds its readers that he has been recently made a member of the exclusive pro-American Bildenberg club.

Belgium between pride and fear 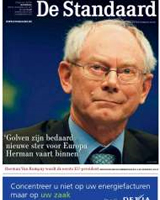 While most of Europe wrings its hands, the Belgian press has unanimously hailed the appointment of their Prime Minister to the top post in the European Union: "The coronation," headlines Le Soir, "Yes !" exclaims La Libre Belgique, "A new star for Europe" announces De Standaard. "The soon to be ex-Prime Minister of Belgium will not be a servile poodle for member states, nor will he be a political greenhorn at the mercy of countries with diverging interests and leaders with oversized egos," writes La Libre Belgique. In a similar vein, Le Soir takes issue with pundits who have dubbed Van Rompuy a "Mr Nobody at the head of Europe." And yet "for a number of months now [Belgians] have taken to their heart this tactical, discreet, shrewd and philosophical Van Rompuy who has brought stability back to their country".

Le Soir believes, however, that this appointment has been "weighed down" by the nomination to the post of High Representative of an "unknown whose only qualities at this moment are the fact that she is a woman, a socialist and British". Van Rompuy's departure from the Belgian government now raises the question of his succession. "Van Rompuy gone, crisis coming back?", worries Le Soir and the Belgian press in unison, since the gap is likely to be filled with the return to power of former Prime Minister Yves Leterme who left the post following the breakdown of government negociations back in 2008. Such a prospect fails to please De Morgen: "We ground our teeth last night, because the most logical but not necessarily the most longed for outcome is that Yves Leterme takes up the slack. For this country, this means great misery."

The second tier counts too

As if things weren’t opaque enough as it is right now in Brussels: behind the backroom bargaining over the two key posts of Council president and High Representative for Foreign Policy, behind the discreet dealmaking for the doling out of the commissioners’ portfolios, a score of candidates are jockeying for position in yet another race. “The second tier counts too,” headlines the Tagesspiegel, noting that Germany – absent from the duo at the EU’s helm – is pulling levers in the wings to put its handpicked people in the posts right beneath the Commission. The first job targeted was secretary-general of the Council of the European Union held by the “highly influential” Frenchman Pierre de Boissieu. “France shows a keen interest in continuing to steer the work of the Council, but Germany plans to send in a candidate too,” wrote the Berlin-based daily a few hours before de Boissieu was once again reappointed. Another coveted position: secretary-general of the EU Foreign Service. “He will pull strings as an éminence grise” – which is why the appointment should be decided at the same time as those of Council president and High Representative.