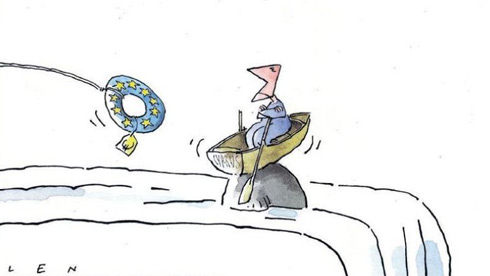 How Europe’s leaders ran out of credit in Cyprus

The bigger problem remains the gap in trust between the north and the south, writes a Financial Times columnist.

European leaders must surely know that they are taking a big risk with Cyprus. The danger is obvious. Now that everybody with money in Cypriot banks is being forced to take a hit, nervous depositors elsewhere in Europe might notice that a dangerous precedent has been set. [At the time this article was written, the Cyprus government proposed taxing all savers.] Rather than run even a small risk of an unwanted financial “haircut” in the future, the customers of Greek, Spanish, Portuguese or Italian banks might choose to get their money out now. If that starts to happen, the euro crisis will be back on again – with a vengeance.

The people behind the Cyprus plan hope that the risks of contagion are small. They reckon that the Spanish banks are on the mend, and that Greece too has pulled back from the brink. There is no reason for depositors to draw lessons from the peculiar case of Cyprus, whose banks are stuffed with Russian money.

Maybe so. And yet EU leaders have got these kinds of calculations badly wrong before. At a summit in Deauville in September 2010, they announced that the holders of sovereign bonds in bailed-out countries would lose some of their money. The result was a severe worsening of the euro-crisis, as investors began to demand much higher rates to lend to risky-seeming countries, such as Italy or Spain.

So why – after all the painstaking efforts to put euro-humpty back together again – have European leaders taken such a gamble in Cyprus? The answer is that they too are out of credit – political credit.