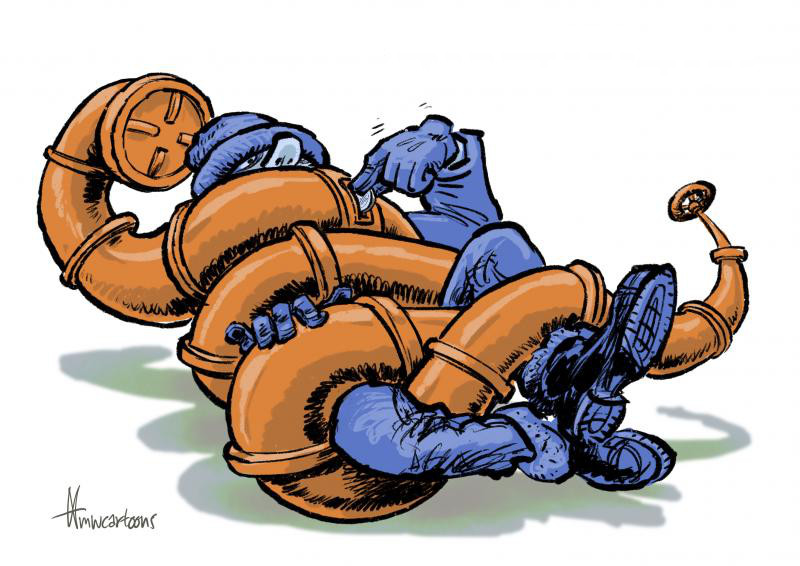 If there were one person in Central Europe who has a vested interest in Europe continuing to buy Russian gas, it would be Daniel Křetínský. The Czech energy magnate built up his businesses on stable revenues from gas transit. Stopping the flow would put all that in danger of toppling.

On 26 April evening, the Polish gas company PGNiG announced that Russia was stopping gas supplies to the country, and Bulgaria soon followed suit, after both countries refused to pay for gas in rubles. Despite long-term contracts, the evidence is now clear that the gas cocks can be turned off overnight.

It's not only the European countries and the European Union as a whole that find this novel situation unsettling; businesses that profit from piping the gas have also been rattled. While in Poland several gas transit companies operating the Yamal pipeline have been affected, the biggest single transporter of Russian gas into the European Union is Czech businessman Daniel Křetínský.

The possible shut-down of the gas flows directly threatens Eustream, which is owned by Křetínský’s Energy and Industrial Holding (EPH) jointly with the Slovak state. If the Russian gas supplies were to be cut off entirely, Slovakia would lose hundreds of millions of euros every year. And Daniel Křetínský would lose the business that he built his entire empire on.

Although Křetínský’s business has since branched out from energy – he owns 49% of Le Nouveau Monde, which has a stake in French daily Le Monde –  it still rests on it. So how worried should he be?

Gas transit volumes are falling, so are profits

The media began writing about the real impact of the war on Křetínský’s business in early March, when the European rating agency Fitch placed Eustream in the “Rating Watch Negative” category owing to its links with Russia’s Gazprom. The downgrading sparked an especially strong reaction in Britain, where Křetínský is, among other things, the biggest shareholder of Royal Mail and part-owner besides of the West Ham United football club.

Royal Mail shares are now facing raids by speculative investment funds, and the British media, led by The Times, have begun discussing the “vulnerability” of the business of the “Czech Sphinx”, the nickname of the “mysterious” and tight-fisted businessman.

More : A turning point for illiberalism in Europe?

Křetínský’s own company, EP Infrastructure (EPIF), which handles gas transit and distribution in Slovakia, claims in its own defence that there is no link between its health and the sliding Royal Mail share price, since the shares are controlled by another entity – the investment fund Vesa Equity Investment. It also claims that gas shipments through Slovakia continue to ‘proceed uninterrupted’.

So far, this is true. At the beginning of March, all the same, the EPIF Group did agree, in view of the situation, temporarily to delay dividend payments and further acquisitions. Things clearly are not as the company would have liked, and they are evidently aware of the real risks.

While EPIF did make a profit last year on rising gas prices for end consumers, those profits failed to cover the shrinkage from falling transit volumes. In 2021, that was a decline of 27 percent, which confirms that EPIF’s profits largely depend on the gas transit. And, according to EPH itself, most of the gas that flows through Eustream’s pipes comes from Russia.

“The gas flows were initially skewed by the Covid crisis and, last spring and summer, by irregular deliveries from Russia,” explains Jan Osička, an energy expert at Masaryk University. Russian supplies were at the lowest they had ever been, and the reservoirs pumped up with gas from Russia remained half empty.

Whether Russia was preparing for an invasion and so deliberately pumped less gas into Europe no one can say for sure. But it is one possible explanation. In any case, shrinking transport volumes have affected the performance of Eustream and its parent company, EP Infrastructure.

Why is piping gas such a profitable business anyway? First of all, because it is – or at least was, until recently – a stable business. Simply put, a transporter makes money on contracts with suppliers who need to send gas from one point to another.

“Transport is a regulated industry. That attracts investment, because it provides returns at very little risk,” explains energy analyst Jan Osička. The volume of gas transported – specifically, the amount that companies sign up for – is what determines the profits.

Until recently, moreover, natural gas held a secure place in European energy policy plans as the answer to the question: “What comes once coal is gone?” As a component in the energy transition it was, despite criticism from the environmental movement, meant to play a key role in the transition from coal-fired power stations to greater use of renewables. But that notion is now being shaken to its foundations.

The gas transit business is now at risk because of the actions taken by individual European countries and by the EU as a whole, and not just because of Putin. Although Eustream has long-term contracts with Russian supplier Gazprom, experts agree that in a war “anything goes”, and the current stoppage of supplies to Poland and Bulgaria merely illustrates this.

If the European Union does therefore decide to stop buying Russian gas, a few contracts will not make much difference. Pressure is building in this direction, and in early April the European Parliament passed a resolution calling for a halt to the supply of Russian gas, oil, coal and nuclear fuel to Europe.

Simply put, Russian gas was the goose that laid the golden eggs for Křetínský’s Energy and Industrial Holding

The European Commission has also declared that it wants to cut Russian gas imports by two-thirds later this year. As has now become clear, however, Russia itself may make a similar decision.

The largest independent carrier of Russian gas to the European Union is Eustream, which pipes gas to the Czech Republic, Hungary, Ukraine and Austria, from where it then flows on to other countries. One of these countries, Italy, has already announced a shift away from Russian gas and has even secured gas from Algeria to replace it.

Eustream may be left by this shift with only one transit flow – the reverse flow, through which gas has been flowing from Western markets to Ukraine since September 2014, following Russia’s annexation of Crimea. Even this volu…