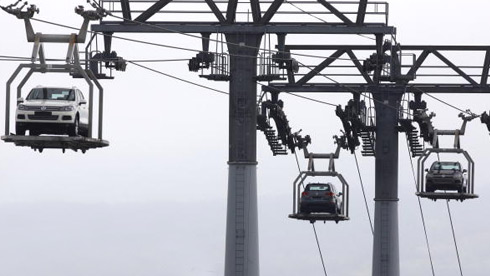 How to avoid becoming the Detroit of Europe?

Just like the bankrupt American metropolis, Slovakia is economically dependent on its automotive industry. If it wants to avoid the same fate, it must refocus its manufacturing sector towards producing alternative high-end value added products.

Reports of the bankruptcy of Detroit, the former car capital of the world, raise a few questions. Who’s next? Will it be us, the country that makes the most cars per capita in the world?

To start with, we have already tried out the Detroit scenario. Once upon a time our main export industry was the armaments industry. That collapsed almost immediately in 1989, when the Warsaw Pact and COMECON disappeared. Over the next three years unemployment jumped from zero to 12 per cent in some industrial centres and in peripheral districts by up to 20 per cent.

Even today these peripheral districts have not recovered from the departure of industry. What saved the Slovak economy was the second wave of industrialization that came with foreign investors, especially after the year 2000.

Automobile plants and factories producing electronics did not pull up into a vacuum. They built on an existing engineering industry tradition and on the technical skills of the Slovak workforce. With the help of foreign capital, the Slovak arms manufacturing and engineering industry was literally reincarnated in gun factories and electronics plants.

If a small country wants to push ahead, it must focus on a narrow range of goods and produce them to a very high standard of quality.

Ghosts of failed industries past

Yes, our economy’s dependence on a small number of export industries is high. Of our entire exports, the automotive industry (including parts) accounts for about 22 per cent, consumer electronics 21 per cent and exports from the civil engineering sector about 10 per cent. Only because of specialisation are we able to mass-produce high-quality products at reasonable prices and gain market share in Europe, and also more recently in Russia and China as well.

Still, the nagging question remains: what about Detroit? And what about our arms companies two decades ago? Will we see a repeat of that?

In answering this question, we can begin by observing that, for example, a high-quality car is a very complex product. It consists of very different parts, such as the motor, the tires, the windshield, and the operating and navigation software.

Once upon a time Henry Ford could make a substantial part of the car’s components inside a single factory. Today, a complex stream of suppliers feeds components to the final assembly lines, and those component suppliers are fed in their turn by parts suppliers upstream.

When Volkswagen arrived in Slovakia twenty years ago, nearly 90 per cent of the components had to be imported from outside the country. Today, the auto industry still imports components that make up more than 60 per cent of the total cost of the vehicle.

The important point is that the share of imported inputs is falling, and the number of parts and domestically produced components is rising. In economics we talk about a more anchored industry. The latter is undeniably good news for us. The more components and parts we produce here, the more jobs there are for Slovaks.

A lesson to be learned

Certainly, the situation in our industry is far from ideal. It is a good thing indeed that the number of suppliers for car manufacturers and electronics producers that have set up in Slovakia continues to grow. In most cases, however, these suppliers are the traditional foreign partners of multinational companies, and Slovak companies can break into those multinational networks only with great difficulty. What’s more, foreign suppliers established in Slovakia usually only manufacture their products here, while keeping the more refined, well-paid activities, such as design, financial services, research and development, at home. Unfortunately, we have little to offer them. And that is our big homework assignment for the next 10 years. After all, those who say that automakers and television factories will leave one day are right to a certain extent.

Those that will pull up and leave will mostly do so to divest “economically dumb” activities, such as simple machining or assembly, which tack on very little added value. We are still competitive in these areas because we are cheap. But the Romanians and Ukrainians are cheaper still, and one day they will take this production away from us.

If we prove capable of building up the production of intelligent components for cars and televisions, that won’t be bad news. The fate of Detroit, as well as our own history, should serve as a warning and a lesson to be learned.