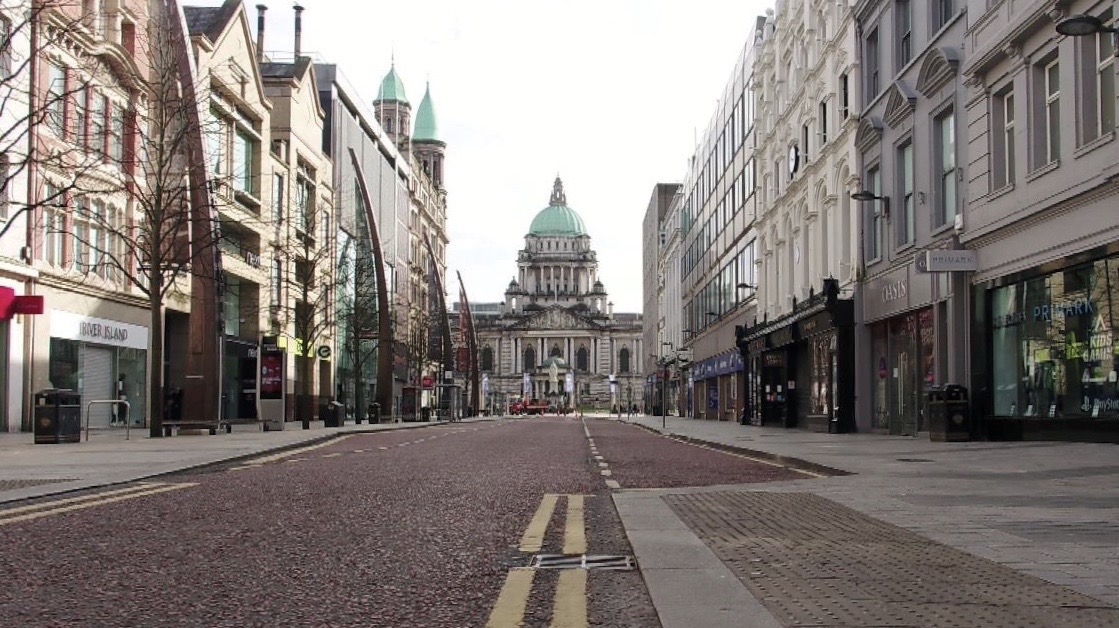 In Belfast, people's experience of the virus has been much more on par with the Republic of Ireland than with England or London, and yet they have been subject to the rules of the UK. When normalcy returns, lessons learnt during this period are bound to have an impact on the ballot box, says award-winning writer Jan Carson.

Lovebelfast  | Central Belfast during the Covid-19 pandemic lockdown, May 2020.

I recently received an email from a friend in Mainland Europe. She was pleased to hear Ireland had moved out of Lockdown. Once again, I had to explain that I’m not actually Irish. “It’s complicated,” I wrote, this being Northern Irish shorthand for “sit down, it might take some time to explain this.” Though Belfast, where I’ve lived for twenty years, is in Northern Ireland, which is on the island of Ireland joined by a, currently negligible, border to the Republic of Ireland; though I hold an Irish passport, albeit alongside a significantly more battered British one; though my publisher is Irish and yes, now you mention it, my last novel did win the EU Prize for Literature for Ireland, technically I’m not Irish. Or am I? In Belfast it depends who you ask and which particular day you’re asking on.

During the Covid-19 crisis many Northern Irish people wished they were Irish. This is a bold claim from someone who resides in East Belfast, a predominantly Protestant, historically Unionist neighbourhood. While the Westminster Government were presenting a confused and often divided front, disagreeing on when to close and reopen schools, mismanaging hospital resources and struggling to tackle the economic implications, down the road in Dublin, the Irish Taoiseach Leo Varadkar was leading his country through the pandemic with wisdom, compassion and, perhaps most significantly, some modicum of success. We in the North could only look on enviously. There were times when it wasn’t just geography which made Dublin feel closer to Belfast than London.

Though there’s been debate over the recording of statistics it’s clear that the UK has been especially hard hit by the pandemic. Compared to other similar nations the death toll and infection rate has been catastrophically high. However, while Northern Ireland remains part of the UK, our Covid-19 experience has had more in common with the Republic of Ireland’s than any of the other member nations. The mood here has been similarly sombre but calm; the virus’s impact, though tragic, less devastating than initially predicted.

Until recently I had a strong sense of my British identity, yet sitting in Belfast, watching the daily news briefings from Downing Street, has become an increasingly alienating experience. It’s not just Boris Johnson’s handling of the Pandemic with his initial misguided insistence upon herd resistance, his inability to source sufficient PPE or even properly acknowledge the death toll climbing ever higher, which leaves me, doubting his leadership. It’s the creeping suspicion, that the current Tory government, (and arguably most of its previous incarnations), neither understands nor particularly cares about Northern Ireland.

This isn’t a new feeling. My faith in the British government was on the wane long before Covid-19. A few months back, there was Johnson’s sacking Northern Irish Secretary of State, Julian Smith. Smith’s short term in office saw the Assembly reconvene after a three-year hiatus. He was respected by all sides of the community, (no mean feat in Belfast), and actually seemed to like the place. His dismissal struck me as wildly counterintuitive and not in Northern Ireland’s best interests. Prior to this Northern Ireland had to put up with Theresa May’s mishandling of our stakes in the Brexit negotiations and of course, it would be remiss not to mention Brexit itself. As the rest of the UK slowly realised that David Cameron’s EU referendum would have massive implications for Northern Ireland with its physical EU border and legacy of conflict, many of us in the North felt once again, misunderstood, neglected and unimportant.

During the same period, I was seriously considering my Irish identity. I’m entitled to claim this under the terms of 1998’s Good Friday Peace Agreement. My sense of identity has always been primarily linked to community and the Irish writing community has been so warm, welcoming and inspiring I stopped considering myself a British writer years ago. Furthermore, Ireland has never been more open-minded or liberal. Referendums on equal marriage (2015) and the legalisation of abortion (2018), ushered in human rights legislation in advance of similar changes in the North.

The fact that my Irish passport guarantees me ongoing EU citizenship has also influenced my thinking. The calm, clear leadership I’ve witnessed from Varadkar and President Michael D. Higgins, have made my dilemma even more pronounced. If a border poll were to be called tomorrow, I’d have huge reservations about committing Northern Ireland to longterm membership of the UK. Recent polls suggest I’m not alone. It’s also not without significance that during Covid-19 First Minister Arlene Foster and the Stormont assembly sided with Scotland and Wales in disregarding the Prime Minister’s measures easing Lockdown. The cracks within the United Kingdom have never seemed more pronounced.

However, now is not the time for a border poll or any drastic decisions. The people of Northern Ireland are otherwise preoccupied working together, crossing cultural and political divides to survive this crisis. In Portadown, we’ve seen Loyalists peacefully adhere to the cancellation of their 11th of July bonfires and use their firewood to build giant sculptures in support of the NHS. In a parish, outside Derry, Protestant and Catholic churches have combined resources to offer practical assistance to locals struggling with Covid-19. My own community work with older ladies from the Falls and Shankill Roads, an infamously sectarian part of Belfast, still separated by a Peace Wall, has moved online, yet continues to foster unity through storytelling. In some ways the pandemic has brought our communities closer.

Local politicians have also been reasonably united in their response to the crisis. It’s heartening to see members of the Northern Ireland Assembly surmount political differences to work for the greater good. However, as the weeks have rolled on cracks are beginning to show. There’s been disagreements over when churches should re-open with DUP and Sinn Féin politicians taking their traditional opposite stances.

While it’s hardly surprising that the possibility of utilising the British army proposed by Unionist politicians has proven deeply unpopular with the Nationalists. Northern Ireland’s fundamental issues haven’t gone away. The pandemic has highlighted the lack of public confidence in leadership at both local and government level. When normalcy returns, whatever it looks like, lessons learnt during this period are bound to have an impact on the ballot box. This might be no bad thing.

This article is part of the Debates Digital project, a series of digitally published content including texts and live discussions by some of the outstanding writers, scholars and public intellectuals who are part of the Debates on Europe network. An online discussion with the authors will take place on 9 June at 7 PM CEST, and will be streamed on YouTube.