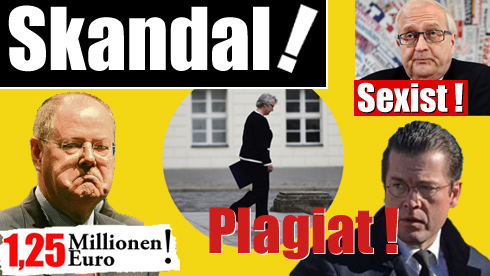 In the land of the well-behaved

Minor stumbles can lead to big falls in Germany. Ministers are tumbling like lemmings over scandals around plagiarised theses and invitations to travel abroad. What gets the Germans so worked up?

Scandal! FDP parliamentary leader Rainer Brüderle has sparked a huge debate about sexism after allegedly uttering a few lewd words to a journalist and glancing at her breasts.

Scandal! Annette Schavan, minister for education, wrote a thesis that allegedly included some passages that were not her own. Despite having done a good job as minister, according to many, she has had to resign.

Scandal! Candidate for the Chancellery Peer Steinbrück [SPD] earned €1.25m moonlighting - entirely legally - and he did pay the proper taxes.

Scandal! Former German President Horst Koehler outraged half of Germany when on a trip to Afghanistan he remarked that the armed forces also represent the country's economic interests. Similar views had already been put down in writing in a paper by the Department of Defence.

Scandal! President Christian Wulff lost his office because of suspicions he could be bought - in the end, the price came to only €400.

A close look at the scandals rippling through Germany's current political scene at the federal level turns up a rather middling amount of dirt. The same goes for the resignation of defence minister Karl-Theodor zu Guttenberg, who had cheated on his doctoral thesis. Abroad there was some amusement that the Germans could get outraged because of such things. Either they are incredibly small-minded, the thinking goes, or they are so soft and spoiled that they have to jump at the slightest misdeed to be able to work themselves up into a fine rage.

Others have much more lurid sins to confess. In Austria, ex-minister Ernst Strasser was recently provisionally sentenced to four years in prison for corruption. In France, Dominique Strauss-Kahn, once a candidate for the presidency, was suspected of having forced a maid to give him oral sex. In Italy, former prime minister Silvio Berlusconi is accused of abuse of office and facilitating the prostitution of minors. He's also facing four years in prison for tax evasion.

Germany, on the other hand, gives the impression of being an idyllic backdrop for toy train sets. But that doesn't make it a peaceful place. All the political media have reported in depth on these affairs, and the details have snowballed into leaping headlines. The citizens have proved impressionable and the politicians, bruised by the whiffs of wrongdoing, have slumped in the polls. For so little?

A country is reflected in its political scandals. The character of a nation is shown in its outrage - just as it's shown by its lack of indignation. Italian psychoanalyst Sergio Benvenuto wrote about Italy in 2010 in Lettre International. Berlusconi, he wrote, made politics for the sports bar, for “the realm of political incorrectness”, where a certain coarseness reigns, and where politicians are hated - unless they are as unpolitical as Berlusconi. That, declared Benvenuto, was why Berlusconi was able to hold out for so long.

The sports bar is not the place that politics in Germany is made for. The centre of Germany is the organic supermarket, where men and women work with their shopping baskets at building a better world. The principles of responsibility, delicacy and propriety rule the aisles here. It's a clean and tidy place - not wicked and crude, like the sports bar. When it comes to what constitutes a political scandal, the organic supermarket has a much lower threshold.

Where lie the sensitivities? In the Schavan (CDU) and Guttenberg (CSU) affairs, it's about integrity. Politicians should not utter untruths and should not have titles they have not earned. Horst Köhler's words were able to spark a scandal because there is an extreme sensitivity in Germany to matters of war. After the two world wars, this country wants nothing to do with combat operations.

If it turns out that there are economic interests involved, it all becomes absolutely intolerable; the Germans will put up with a war only if it serves morally unblemished purposes. To a nation almost synonymous with “the German economy”, economic interests are suspect. Scandals often turn up moral double standards as well.

With Wulff (CDU) and Steinbrück (SPD) it boils down to money and the suspicion that politicians might be indulging in a lifestyle that distances them from the masses. Wulff is also suspected of having acted corruptly. Germany likes to see itself as a clean country where things work so well precisely because they are not "greased". Germany also likes to see itself as a halfway egalitarian country where wealth is frowned upon.

All together, it gives the image of a nation that wants to do the good and proper thing; with money, war and biographies. A country that prizes social cohesion and prefers to shy away from raging controversy. We are the eternally well-behaved.

That such small misdeeds find such space to bloom into great big scandals is owed in part to the fact that the major domestic policy issues in Germany do not divide the nation into two camps. On the European crisis policy, the energy revolution and the army, the parties that represent the interests of the state agree. For another thing, hardly any serious political scandals ever come up. If finance minister Wolfgang Schäuble were ever caught for tax evasion, Steinbrück's moonlighting or Schavan's doctoral thesis would get buried in the back pages.

Naturally, this sensitivity may seem silly. At its best, though, it plays a preventative role and upholds the standards that have made this country one of the richest and best-functioning in the world. In the upwelling of angst against the little sins, lies the fear of the great ones – and that is our early-warning system.

The German disposition would never get up to the Italian way of doing things. The organic supermarket is also an anxious place, with stirrings of hope that nothing too awful will happen to the world.

Without question, there is something frumpy in the well-honed sense of moral uprightness. This is not always appealing, and even in Germany there is a great longing for Italy and reckless abandon - but in a tight spot, the German would rather defer to German justice.

By the standards of the German public, the misconduct of their politicians puts their suitability to hold office in question. That's what the scandals among the elite are good for: weeding out who is suitable for high office, and who is not.

That the standards are so high in Germany is no reason to feel better. They are the expression of a need. In the sports bar the mood is certainly often a lot merrier than in the organic supermarket; but, above all, the Germans must stay morally upright to be able to put up with themselves.

University is sacrosanct in Germany

Two letters, a full stop and a long history: "The German title of ‘Dr.’ has the weight of several hundred years of cultural history,” points out Süddeutsche Zeitung. The Munich daily explains why a dishonestly acquired university qualification has resulted in the downfall of yet another German minister, Annette Schavan.

For Germans, the title confers a "sort of nobility" inherited from the 19th Century — an era when universities were the most important institutions common to all German states, notes SZ.

Unlike the Italians, whose commedia dell'arte makes fun of Il Dottore, or the Austrians whose use of "Dr." satisfies a daily appetite for pomp, or the French for whom a haute école is worth more than a university, or the British who focus on the name of the institution rather than the qualification, Germans are convinced “that German university education is a unique and unparalleled bastion of knowledge.” Although it has to be said that “today’s reality no longer reflects” this idea.