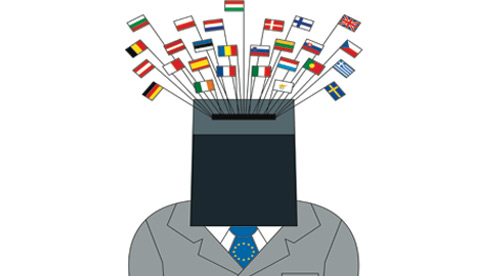 Let’s vote for a European people

Since there is no clear concept of solidarity among the nations of the European Union, it is time to create a nation based on a common political project, according to a Spanish philosopher. The 2014 European elections should be the first step.

Because Spain is not an ethnic nation, nationalism believes it has an open door for founding its own political nation. Similarly, we hear that, since there is no European "people", it would be better not to go any deeper into the project of the Union. Certainly, a state without a common language and culture will find it more difficult to govern itself; but to idealise a common language and culture to fever pitch was never a good idea.

To use in somewhat tortuous fashion the cosmopolitan image of concentric circles, nationalism would restrict solidarity to your own kind: through family, friends and acquaintances, sympathy would be limited to the “big family” of your fellow countrymen – to those who, sharing the same language, would shape a particular vision of the world.

In summary: the naturalist thesis that empathy/altruism develops in concentric circles is wrong and to extend/stop solidarity to and at the “people” who are with me is absurd. But all of this is based on a worse fallacy: “a linguistic community is so different from the rest that it must govern itself politically.” The lack of a shared language – in Europe, at least – makes fluid and instant public deliberation difficult. Well, we’re working on it. It is also true that we benefit from a language without which we cannot think about the world. But, more than conforming to a microcosm that fragments the social reality, language opens us up to language itself, that instrument that allows us to communicate and reflect on our many-faceted cultural conditioning. Learning second languages, translation, or honouring human rights prove that, in any language, we do think of a shared social world, because we all must cope with the practical problems that grow out of that world.

Now let’s tackle the corollary of the twice-flattened premise: as we are different and altruism is limited, we must restrict questions of justice to our own kind. This charade sidesteps all the democratic norms: if the problems affecting us are supranational, the politics to tackle them must be supranational.

[[We can conclude that, to recover its battered popular sovereignty, the EU must integrate politically, artificially creating a new demos]]. In turn, this should then lead to the cosmopolitanisation of international law; that is, the process by which international law ‒ which today is a match for the strongest states ‒ becomes a right that is also formed by and for the citizens of the world. But what to do with an EU that is going under for lack of foundations that would let a transnational democracy of quality emerge?

We resort to the law to shape the social reality intentionally. Habermas says that “every element of human culture, including speech and language, is a construction. Although most of it has not seen the light intentionally, (...) the legal agreements are the most artificial of those [constructions]”.

As well, to overcome the cultural structures that govern us (borders, institutions, codes, language, etc) and to arrive at transnational solidarity, it seems necessary to give more power to parliament – so promoting the citizenry to co-legislate together with the Council (States), and create true European political parties.

We would thus resuscitate a shared project that we only look to today to see what advantage my country, or myself, can gain from it. To vote for European parties would lead to discussing and legislating democratically on the many common problems; the media would translate and broadcast into every public sphere the fundamental technical information and the interests that are at stake. [[The influences of a burgeoning European civil society would help along this transnationalisation of the various public spheres, which will help amalgamate individual interests within a shared policy framework]].

Because Europeans will be the citizens with whom we will create this pact, along with accountability and responsiveness there will arise ties of solidarity, the sense of co-membership typical of all democratic self-government. It will not cost so much for those who already share a lot (from the world wars up to enlightened reasoning in facing problems in a practical way: tolerance, rule of law, democracy, etc), which is a basis on which to shape a broader and more abstract collective identity, one substantial enough for a German to pay the taxes of a Greek.

In addition, to vote for European parties with genuine legislative – and executive – capacity would quash criticisms that the EU must face up to today over its bureaucratic and mercantilist functioning; and by its intergovernmentalism (nationalism), which forces the weak to submit to the designs of the strongest. Only if there are alternatives and rotation will we see the EU not as an elitist project, but as a political project whose current drift we reject. A project that has not been kidnapped, but directed by a few parties that must be accountable to us if they do not wish to be relegated to the opposition benches.

Better redistribution and effective popular sovereignty will expand the demos. For that, the political left should oppose not the European political project, but its current monolithic character.