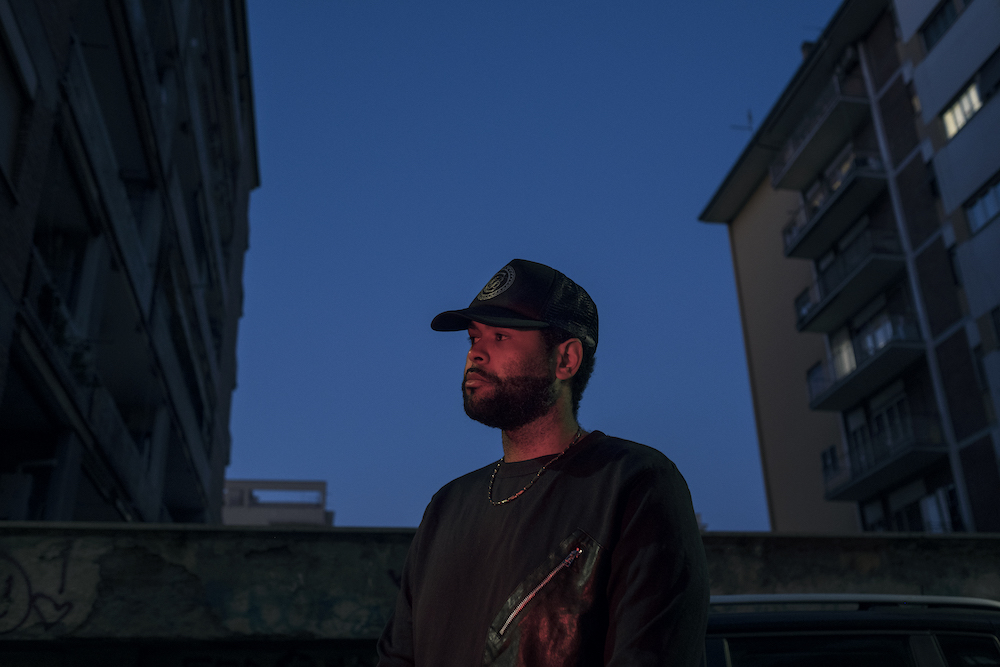 Almost a million people born in Italy are currently unable to become citizens, either because they’re under 18, or didn’t meet the strict criteria and time limitations. Like Luca Neves, if they’re not able to keep on renewing their permit of stay for family or work reasons, they could easily fall into irregularity. Second article from a series on young undocumented Europeans at times of Covid-19, in association with Lighthouse Reports and the Guardian.

Early rays of sunshine filter through the kitchen shutters as Luca Neves launches one of his daily live cooking sessions on Facebook. Today, he’ll prepare grilled polenta with melted cheese and sauteed zucchini.

Since Italians went into lockdown in early March to contain the spread of the coronavirus, these informal video streamings are, he explains, “my way to open up, get over this period.”

Neves grows thoughtful when he realises that there’s another chef among his viewers. “It’s a hard moment for all of us, working in restaurants,” he says to the camera, before lightening the atmosphere: “now just brush with oil and get over the fear: can’t you hear the zucchini singing in the pan?”

As he broadcasts from his kitchen in an anonymous apartment block in Appio Claudio, a densely-populated district in eastern Rome, Neves hides a wound. For more than twelve years, he has been undocumented.

He’s one of many in Italy: about 600,000 people live in the country without papers, according to data by think tank Istituto per gli Studi Politici Internazionali. These numbers have risen sharply since a 2018 ‘security decree’ by former interior minister Matteo Salvini of the far-right Lega Nord party, removed humanitarian protection permits.

But unlike the vast majority of these people, Neves, who’ll turn 32 in a few months, never came to Italy: he was born here. In Italy, when you’re born to foreign parents, a small mistake in your late teens can affect your whole life, and turn you into a ghost.

It was 1975 when Luca’s father, Joaquim Antonio Neves, disembarked at the port of Nettuno, 50 kilometers south-west of Rome. Maria Araujo Geltrudes, his mother, was working as a housemaid in the capital. Like hundreds of Cape Verdean young women before her, Maria Araujo – known as Cristallina for her dazzling, crystal-like smile – had left hardship in the small archipelago nation in the Atlantic Ocean, to fulfill requests for domestic work by a growing Roman bourgeoisie.

A stubborn, ironic man, Joaquim Antonio had travelled the world as a sailor since he was fifteen. During a layover in Nettuno, he accepted a local fisherman’s offer to stop there and work with him. When the man was killed by an unexploded WWII ordnance trapped in fishing nets, he quit the job to become a groom in a riding school. He and Cristallina settled down shortly after.

Neves grew up in Trigoria, a suburb known for hosting the training ground of Roma football club, one of Italy’s best teams. As a teenager, he would occasionally deliver pizza to famous players like Cafu, Francesco Totti and Gabriel Batistuta. His time was taken up by music, a vocational school for hotel and catering, and odd jobs.

In the 1990s, the Neves’ were one of the few black families in the traditionally right-wing district. Luca learned to react to racist comments with dignity. “My mother had given me a life-changing lesson: once a schoolmate called me ‘dirty nigger’ and back home, instead of listening to my complaints she looked at me in the eyes and told me it was on me to decide how others will treat me,” he remembers.

Like many of his friends, at 18 years-old he was battling with different ideas for his life: an uncertain career in music or an apprenticeship in restaurants to become a chef.

His plans were interrupted abruptly in late 2007.

According to the 1992 Italian citizenship law, one of the most restrictive in the EU, Italy-born children to foreign parents have one year - between the ages of 18 and 19 - to apply for citizenship.

At the time, while his parents “worked, worked and worked,” Luca was left facing a daunting bureaucracy. When he finally collected all the requested papers, he was told it was too late: he had turned nineteen one month earlier.

“This is where my calvary began,” he says, shaking his head.

The somewhat rigid, military education given by his father and the more compassionate, confident vision of his mother, helped him navigate the following years.

In 2013, months before his mother died from a stroke, he was stopped by police and received a deportation order. “I was so busy helping her that I passed the time limit to appeal against that order,” he says. For Luca, it is a question of principle: if you’re born in Italy and your parents paid taxes for decades, you shouldn’t be refused a citizenship application because of a simple delay.

Even without papers, Neves fought to climb the ladder of Rome’s culinary scene. He proudly recalls the day he was congratulated for his spaghetti alla carbonara, Rome’s landmark dish, while working illegally in a historic trattoria. “They offered me contracts of up to 4,000 euros a month as a head chef, but I had to refuse,” he says. No job contract could undo the pending deportation order.

In the meantime, Neves had developed a budding hip hop career. He was touring Italy performing as Fat Negga, his tracks mixing Cape Verdean criollo with Roman slang. “Rome is my history, gives my identity, gives me my freedom: tell me where you want to chase me to?” he sings on Fat Negga’s last, unpublished track, called ‘La mia città’ [My city].

In 2017, he fell in love with dance teacher Hélène Mastroianni and they decided to tour together, combining music and dance. But they had to decline multiple offers to perform outside Italy. “I often feel like we have two lives: our everyday one, where we make plans, we argue, we laugh, and a parallel one, where everything is ruined by Luca’s invisibility, by a constant fear,” explains Hélène.

In late 2019, this second life was about to swallow the first one, once and for all.

In an attempt to avoid deportation, Luca had applied for family reunification with his father, who is staying in a clinic after suffering multiple heart attacks and recently tested positive for Covid-19. On the morning of September 19, when Neves showed up at the central police’s immigration office to collect his documents, he was trembling with joy. But minutes later, he found himself locked in a vast cell in the building’s basement.

Dragged into a pit

He had secretly slipped his phone into his documents folder. He texted his girlfriend, who was waiting outside the station, and his lawyer. “It was like being dragged into a pit, with no holds: it took us a while to breathe again,” Mastroianni remembers.

One officer told Neves that the only way out of there was a plane to Cape Verde, where Neves had only been for a short holiday aged six. But the local detention facility in Ponte Galeria was at full capacity. Neves was given a one-month order to sign in with authorities twice a week. But it was revoked the following day as a judge stated there was no realistic prospect to return him, since he was born in Italy. When they freed him, it was nighttime.

At least 900,000 people born in Italy are currently unable to become citizens, either because they’re under 18, or didn’t meet the strict criteria and time limitations.

For Paula Baudet Vivanco, a spokesperson for Italiani Senza Cittadinaza (Italians Without Citizenship), a grassroots movement advocating for reform of Italian citizenship law, Luca’s case “is an extreme one, exposing all the flaws of old norms” about what it means to be Italian. Her group advocates for the children of immigrants to be naturalized at birth or during their schooling.

Italiani Senza Cittadinaza estimates at least 900,000 people born in Italy are currently unable to become citizens, either because they’re under 18, or didn’t meet the strict criteria and time limitations. If they’re not able to keep on renewing their permit of stay for family or work reasons, they could easily fall into irregularity.

“Usually at 18, a young Italian thinks about his driving licence, votes for the first time… for us, it’s as if adulthood arrives much later,” Baudent Vivanco said. “You spend your best years waiting, refusing jobs...it’s an infernal circle from which you can’t leave.”

With prospects of an economic crisis because of the coronavirus pandemic, “it’s even clearer that the idea that we’re all in the same boat in face of the virus, is wrong: Italians without citizenship are left drowning,” she says.

As for Neves, he was preparing to appeal the rejection of his family reunification on March 25, but civil courts were shut down weeks earlier. No other date was communicated. And financial assistance? “Forget about it, I don’t even have a health card or ID card anymore, I just don’t exist,” he tells me during one of many long strolls alongside the Parco degli Acquedotti, one of Rome’s largest green areas.

From our position, we can see the large expanse where Federico Fellini filmed the opening scene of ‘La dolce vita’. Luca’s story seems closer to that of another masterpiece partly shot here: ‘Mamma Roma’, by Pier Paolo Pasolini, whose hero is dramatically brought back to a past she wants to escape.  “This virus was a bitter surprise,” Neves says. “But I’m used to quarantining, I’ve been doing so for the past twelve years.”