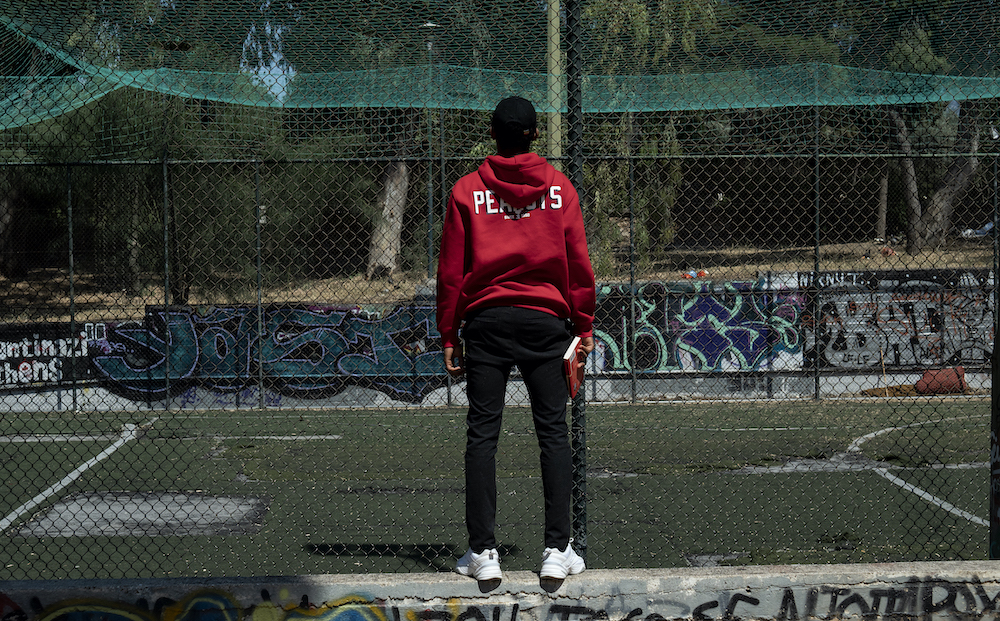 Arrived from West Africa, Amadou has been offered a place at Sciences Po Paris, the training ground for France political and business elite. But his asylum application was rejected twice, and what should have been a triumphant arrival leaves him at an agonising crossroads. If his final asylum appeal fails, he will not be able to enrol, and lose the chance of a lifetime. This is the second article from a series on young undocumented Europeans at times of Covid-19, in association with Lighthouse Reports and the Guardian.

From the stack of books Amadou Diallo took with him last summer to the Greek islands, it was a biography of Frederick Douglass that kept finding its way back to the top. There was a quote from the 19th century thinker, who escaped slavery to lead the abolitionist movement, that resonated: “Once you learn to read, you will be forever free.”

Diallo was on Sifnos, a destination for well-healed foreign families and cultured Athenians. An asylum seeker from Guinea, he was working long hours to ensure other people got the holidays they paid for as he helped to manage a six-room hotel. At night he would unwind with the life stories of great men, reading and pondering what shape his own freedom might take.

Having just turned 20, the boy who arrived alone from West Africa three and a half years ago has taken every scrap of a chance that was given to him. From boutique hotels on fashionably off-beat islands, to a private school where diplomats send their children, he has seen a vision of what Europe has to offer. He has read voraciously and worked hard to belong here. But unlike his schoolmates or the Sifnos tourists, Amadou's place in this new world relies on Greece's asylum appeals process.

Diallo did not grow up with dreams of leaving Guinea. It was only after his father died that his life pitched into a kind of West African Dickens. Along with his younger brother, he was sent to live with his stepmother, an abusive woman who did not care for the boy and sold him to the owner of a gold mine.

Spotted by an aid worker

After several attempts, Amadou manages to escape and to cross the border with Mali. He then took the route north that would eventually lead him to Turkey. From there, he caught a boat to the Greek island of Lesbos. When the 16-year-old finally reached Athens, two months after leaving Guinea, he was spotted by an aid worker who brought him to a children’s shelter run by the Home Project, a non-profit organisation. It focuses on sheltering lone children who, like Diallo, came in their thousands and ended up surviving on the streets, in camps or detention centres. As an unaccompanied minor he was classed as vulnerable and granted temporary protection.

Through the Home Project he met Anna-Maria Kountouri, an immigration lawyer. She explains that minors have a race against time to gain legal status to remain in Europe, as when they reach 18 it is more difficult.

To secure his future in Europe, Diallo needed the Greek authorities to accept his asylum claim. But the rejection rate in Greece for unaccompanied minors has risen sharply in recent years under new hardline asylum laws. Children whose cases are rejected are not deported but coming of age sweeps away that protection.

In the shelter Diallo started learning Greek and English to add to his native French. As his language skills developed, the shelter staff encountered a boy who spoke softly and deliberately and was clearly bright. They arranged for him to sit an entrance exam for a sought-after French private school in Athens, which he passed.

The school year had already started when he arrived, but he embraced the challenge: “It was [an] opportunity to prove [to] them what I’m able to do if I get help,” he says.

At first, Diallo’s troubled past made him reticent, even with a psychologist who was tasked with helping him adjust. But gradually he progressed from being a quiet 16-year-old to the leader of his shelter, and was elected president of the student body at his school. Now he says he loves to be around other people and only spends time alone to study.

The last day of January was a big day for Diallo. He was hoping to be granted asylum on appeal and finally let go of some of the uncertainty of his life. Kountouri had spent weeks gathering evidence from his earlier life, including photos depicting the injuries he had suffered as a child labourer at the mine.

But when the decision came, it was another rejection. He remembers staring at the piece of paper in disbelief. His mind filled with questions. Why was his suffering not recognised? He had the presence of mind to take a photo of the decision and send it to Kountouri. She reassured him they would find a solution. Alone with his rejection paper, it was hard to feel reassured: “I was alone and I didn’t feel any compassion even from the person that was giving me the result.”

Diallo and his lawyer now faced an uphill struggle to get a judge to overrule the rejection on the grounds that it was “illegal and arbitrary”. A third rejection would lead inexorably to a deportation order.

“It's like being a criminal, not having an ID. But I learned that you have to try, not give up, just keep trying. I told myself I would not let myself down and I will not give up school,” he says. “Because this chance that I have now, being in a private school and graduating this year, not everyone has this opportunity.”

““It's like being a criminal, not having an ID. But I learned that you have to try, not give up, just keep trying. I told myself I would not let myself down and I will not give up school,”"

After the second rejection, Diallo’s ID was revoked, so just to walk the streets became nerve-racking. Twice police stopped him and let him go when he showed a picture of his old ID. His confidence slowly evaporated.

He felt embarrassed at the thought of being checked by police in front of classmates: “It’s like you’re a criminal or something, not having an ID.”

A place at Sciences Po

The stakes became even higher when Diallo heard he had been awarded a full scholarship at Sciences Po in Paris, one of the world’s most elite universities. What should have been a triumphant moment initially left him in agonising limbo. If his final asylum appeal failed, he would not be able to enrol. His plight captured the attention of Sciences Po students, who struck up a petition in his name, calling for him to be allowed to come and study.

From late spring into summer, Diallo remained at this fork in the road. One path presented a chance to study at a level that may equip him to do something about the travails of children like himself. The other path, a possible deportation back to the country of his horrific childhood, Guinea.

On 21 July the agonising wait ended. Diallo was called to Greece’s migration ministry, where he and two other “dreamers” were granted asylum. All three were exceptionally gifted, with the other two an ace student and a possible future basketball star. They are, in most senses, the exceptions that prove the rule.

Being an exception is its own kind of burden. It exerts pressure to prove you are deserving. While he was still in limbo, Diallo trained himself to see things positively: “I also try to remember that a lot of good things happened to me. I have access to education, something that I [always] really wanted.”

Now he has the right to remain, a sense of responsibility weighs on his initial reaction to the changed circumstances: “I wanted to be safe, and now I’m thinking that I can do more, I just need to work more and take more initiatives in my life. I learned that we always have to try, to not give up, just keep trying.”