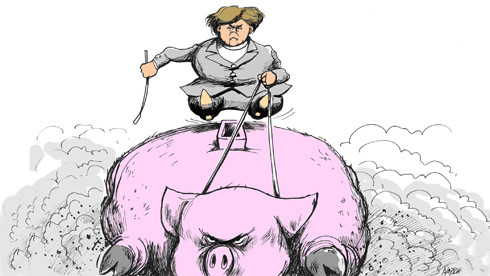 Merkel shepherds us away from the fiscal cliff

The last minute negotiations in Washington to avoid a budget shortfall show that short-termism is well grounded in US politics. And by contrast, it shows that despite her controversial handling of the euro crisis, the German chancellor is wise enough to instead push for long-term solutions.

To hijack a phrase made famous by the US historian Robert Kagan, “Americans are from Mars and Europeans from Venus” when it comes to dealing with questions of long-term fiscal health.

The fact that the best Washington politicians could come up with in the face of the so-called “fiscal cliff” is a stripped-down, minimalist agreement belies a genuine US interest in solving its long-term budget deficit problem.

This is not mainly because of US partisan differences (though it often is portrayed as such). Americans of whatever political stripe simply are not serious about the nation’s long-term fiscal health.

How else could you interpret the fact that the only way Washington politicians could be coaxed into accepting an even modest amount of fiscal austerity in pursuit of long-term fiscal health was to convince them – with gimmicks like the “fiscal cliff” – that greater amounts of austerity awaited had they failed to take at least a minimal dose of fiscal medicine now?

Jumping off the fiscal cliff

If US President Barack Obama and Congress really cared about fixing the country’s budget deficit problem, they would have enthusiastically jumped off the “fiscal cliff” with its mandated spending cuts and tax increases, not endlessly haggled to circumvent it.

This is just the opposite of what is happening in Europe where German Chancellor Angela Merkel is leading the charge for short-term fiscal pain in pursuit of long-term fiscal gain. Keynesians and supply-siders both disagree but Mrs Merkel is sticking to her guns that Europe can not return to sustainable growth and prosperity without first putting its fiscal house in order – and she is creatively using German money to get the German rules she wants for Europe.

This – plus the fact that she has been both wise and courageous enough to embrace Mario Draghi’s market-stabilising bond-buying program in the face of determined Bundesbank opposition – is the reason I believe she deserves to be Europe’s person of the year.

Investors note: 2013 looks like the year markets start to realise it’s the “people from Venus” who are on the right track and the “Martians” who are on the wrong one. It’s the Americans who are kicking the fiscal reform can down the road, not the Europeans.

This is putting Europe in danger as well as America. Washington’s failure to address US long-term fiscal health can spark a virtual tidal wave of turmoil throughout the entire global economy. We live in the kind of inter-connected world where the “people from Venus” can suffer grave consequences if the “people from Mars” are not tending to business.

A blow up of the US bond market would do serious damage to Europeans and Americans alike (not to mention the Asians).

Part of the blame for US fiscal health problems rests squarely on the shoulders of the US Federal Reserve, whose quantitative easing policies – whether intentionally or not – have made it easier for US politicians to put the nation’s long-term fiscal health on the back burner.

Why make painful fiscal reforms to protect your sovereign debt when the central bank’s unconditional buying of US bonds does the job for you? (The ECB is demanding reforms before it spends a euro on bond buying).

Fed chairman Ben Bernanke undoubtedly would be loath to admit it but quantitative easing, Federal Reserve style has helped take the air out of the US fiscal reform balloon.