‘Minimum wages: Belgium at the top’ 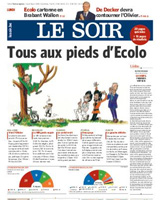 Eurostat figures published at the end of July, show that the minimum legal wage in Belgium is higher than it is in most European countries, notes Le Soir.
At €1,502 gross per month, the Belgium minimum wage is the second highest in Europe, behind Luxembourg (€1,874), and ahead of the Netherlands (€1,478), Ireland (€1,462), France (€1,430) and the UK (€1,190). The lowest ranked country is Bulgaria (€159). The daily also notes that only one country in Europe has “no minimum wage: Germany.”
Regarding “the supposedly devastating impact of minimum wage laws on the labour markets,” the daily's editorial remarks that it amounts the issue, which is often the subject of “hollow debate, is a real challenge,” and adds that in Belgium —

You may unsubscribe at any time. Your email address will not be shared with third parties. *
Categories
EconomyLabor and employmentBelgiumBulgariaEuropean UnionGermanyLuxembourg