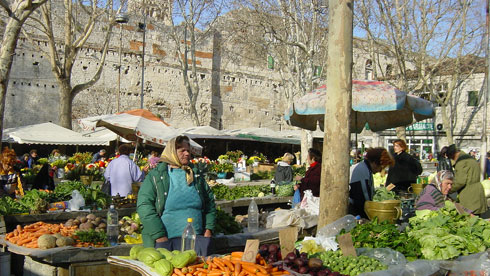 Our markets are going out of season

With its changing rules of trade and tough fiscal discipline leading the government to bring in stricter controls, Croatia’s accession to the EU threatens the country’s fruit and vegetable markets as citizens and visitors have come to know them. A cry from the heart of the writer Jurica Pavičić.

On the occasion of Croatia’s entry into the EU, Jutarnji list reporter Zeljko Ivanjek spoke of the impressions he observed in his foreign friends when he accompanied them around Zagreb. They took in the historical monuments including the Cathedral, Marko Square, the Tower of Lotrščak, and the Opatovina [old city]. But it was the Dolac market that really got them excited.

For years now, the tourist guides of Split have been telling me the same story. Most tourists, they say, take five minutes to tour the Peristil, a Roman square in the heart of Diocletian’s Palace, while visits to the fish market (Peskarija) and the fruits and vegetables market (Pazar) take at least half an hour.

At the Peskarija, young Japanese visitors snap photographs of the bonitos, the forkbeard and burbot. At the Pazar, the Russian travellers sample cheese while young backpackers buy the Morello cherries, sweet cherries and apricots. The tourists make their pilgrimage to our gastronomic shrines, where they explore the herbs and unusual plants they see and sample for the first time: bitter chicory, wild mesclun, wild asparagus, the Dalmatian chard, wild cabbage and other varieties of Brassicaceae.

Symbols of our multifaceted identity

As a general rule, all those who come to Croatia are fascinated by our markets and talk about the unique experience they offer. In my many travels, I have visited fish markets in Barcelona and Lisbon, the Bit Pazar (flea market) of Skopje and the Misir Bazaar in Istanbul. I have bought dried kid (goat) in Sarajevo, spices in Turkey, fresh cod in Portugal.

Nevertheless, there are very few markets that can rival the ones found in Croatia, and in particular those of Split. Why? Quite simply, because our markets are not set up in out-of-the-way locations, at the edges of cities, on the borders of docklands or out in the industrial fridges. They strut their stuff in the centres of the towns and so show the importance of food in the life of mankind. Our markets are even the example of our plural identity. All of Central Europe is laid before us on the stands that sell porcini mushrooms, sauerkraut and wild garlic. The Balkans arrive with the Travnik cheese of Bosnia, with sheep’s cheese, kajmak (a cheese similar to mascarpone) and peppers. The Mediterranean is present in all its glory with artichokes, wild asparagus and beans. Our Pazar and Peskarija show our true selves, free of posturing or any need to make ourselves appear better than we are.

This is why I believe that markets, and fish markets in particular, are part of the intangible heritage of Croatian culture, and why they must be preserved and defended as cultural, tourist and anthropological institutions of the first rank. I am not sure, though, that [Finance Minister Slavko Linić] shares this opinion, since he wants to impose on the fruit and vegetable merchants an inappropriate model of financial control (they are now obliged to have cash registers and to hand over a receipt for all the goods sold).

I really am the last in the country to oppose the need to bring more order into plenty of areas. Although our present government has let us down in many respects in the last year and a half, it must be admitted that it has succeeded in imposing more fiscal discipline. The government of [Prime Minister] Zoran Milanović, which includes Linić, has managed to reduce tax evasion, cut back on the very prosperous grey economy, and force major economic players to hew to the laws.

Still, it seems to me that the custodian of the state treasury, like a “scourge of God”, should show more flexibility when it comes to the street markets. The state’s current efforts risk bringing an important cultural, tourist and social institution into harm’s way. Traditional markets must not be turned into outdoor Lidls, into shopping malls without roofs or air conditioning. If that were to happen, it would be the coup de grace to an important part of our national culture.

Times are tough for our markets. They owe their beauty and richness to the fact that they are a crossroads of three regions and cultures, where the merchants of fruits and vegetables and regional products are the best ambassadors without even being conscious of it. Joining the EU may upset this well-honed balance. Suddenly, the border of the EU with its customs regulations has sprung up between us and Bosnia’s Vlasic and Livno cheeses. From now on, it is the Schengen area that separates us from Montenegrin pomegranates and Macedonian tomatoes and watermelons.

The international supermarket chains installed in Croatia have hailed our accession to the EU with an avalanche of price reductions that will certainly divert a part of consumers from the markets, especially if those markets present the same products in the same way as in the stores, which have parking and air conditioning.

If you add the intention of the government to bring electricity to the markets and to tax them, these gastronomic institutions risk being transformed into ordinary shops under the open sky – but ones that are more expensive, less practical and less hygienic than the sanitised and culturally monotonous big names like Interspar or Billa.
Between the bona fide claims of the state and the very real problems of the fruits and vegetables and fish merchants, a reasonable compromise must be found. Whoever is responsible must bear in mind that the fruit, vegetable and fish markets must not be made over into ordinary places reduced to the basic activity of buying and selling. They are part of our history and our culture. They are the mirror of our identity, they are tourist attractions and they add irreplaceable spice to our life. Whatever the agreement that the fruit and vegetables and fish merchants make with the Ministry of Finance, these temples of our culture and our way of life should not be threatened.