Papandreou resorts to blackmail to survive

In response to the dissent of his people, the Greek Prime Minister has chosen to organise a referendum instead of calling for early general elections. His bid to safeguard his future will mean that the Greek population will faced with a simplistic choice.

Greek Prime Minister on arrival at the Brussels summit of 26 October. 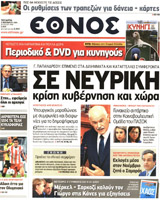 The Prime Minister wants to avoid early general elections at all costs, and this is the reason for the announcement that he intends to organise a referendum to approve or throw out the Eurozone agreement [concluded on 27 October].

The reaction of the political class has been nothing short of extreme. There is no denying that MPs have been spooked by the action taken on 28 October, which, for the first time in 71 years, prevented the traditional parade on our national holiday from taking place — a development that has clearly placed the Prime Minister in a delicate position.

A crisis has also erupted in the ranks of the PASOK [ruling socialist party] parliamentary group. It is now clear that George Papandreou no longer has the support of the 151 MPs that he needs to promote the referendum.

A PM desperate to avoid the polls

And this means that he will have to walk a tightrope to survive in the wake of next Friday’s confidence vote, because all the indications are that George Papandreou’s colleagues will not allow him to go through with this referendum, even if he does have their confidence.

If we step back to look at events solely from the personal perspective of the Greek Prime Minister, resorting to a referendum will be to his advantage, at least on paper. There is no question of it being a pretext for for a heroic exit from political life, as some commentators have claimed.

If we start from the beginning, the very first thing we can say about Georges Panpandreou is that his government’s mandate has been a catastrophe that has gone against the interests of the people to the point where it is without precedent.

Certainly, he had to face extraordinary adverse circumstances, but there is no denying the division that now lies between the government and the population. It is for this reason that the Prime Minister is desperate to avoid going to the polls.

No, it is not because there is a “risk to the nation”, but because the consequences for PASOK would be immeasurable. An election now would undermine the entire political class, and damage George Papandreou’s international political ambitions. That is why a referendum has been deemed to be a better solution.

We can expect mass abstention

Papandreou has decided to blackmail the Greek people by confronting them with a dilemma: "Either you vote for the European agreement, or if you dare to say no, Greece will go bankrupt and we will leave the euro".

Between 80% and 85% of Greeks want nothing more to do with Papandreou and his government, but we cannot say that there is popular support for state bankruptcy. If over the next three months, the government mounts a press campaign to identify a “no-vote” with bankruptcy, the people might respond by voting “no” on the day.

Alternatively, we can expect mass abstention from all the parties, and a turnout as low as 15% to 20%, which would mean that the procedure would be simply dropped.

“Greece in torment”, headlinesTa Nea. Notwithstanding George Papandreou’s solo decision, his country “does not decide alone in Europe. The profound effects of the economic crisis could take down the entire Eurozone, and the threat of a full-blown disaster is now imminent.”

For their part, “Merkel and Sarkozy have announced that they will do everything in their power to ensure that the rescue plan agreed last week in Brussels is implemented. But have they asked the opinion of Greece’s conservative opposition leader Antonis Samaras? Or extreme right leader Giorgos Karatzaferis? Antonis Samaras has told the Greek President that he will do all he can to prevent the referendum from taking place. He may well succeed, but what will happen then? If there are elections, and he is voted into office: are we going to renegotiate all of the Greek bailouts?” wonders the daily.