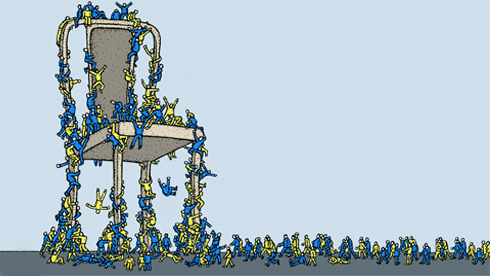 Politics turns back to the Athens agora

The institutional and European democratic crises are pushing leaders towards tricky choices in terms of governability. Would it not perhaps be better to move toward new forms of participation that better match citizens’ needs?

“No experiments! Keine Experimente!” said Chancellor Konrad Adenauer to the German people. That was in 1957. After the defeat of Adolf Hitler, a solid democracy was born and yet there was something narrow-minded and inappropriate in this warning that was addressed to a defeated population, which had succumed to the most horrendous of experiments only years before. In the depths of the German mind, this fear of experimenting has not gone away.

But today the situation is totally different in both Italy and in Europe. The crisis has unmasked nation states as being powerless and democracy is in tatters everywhere. Politicians and citizens are out of touch with each other, with the former shut away in their lairs and the latter desperate to be heard. Unless we see ourselves as having been beaten, now is precisely the time for experiments in democracy. It is time to ditch the conventional ways of doing things that politicians and journalists continue to hang on to out of laziness and convenience. Manuel Castells wrote in La Vanguardia on March 2: “Innovate or die”.

The custodians of the old order can’t see the link between the various crises: the economic, European, climatic and democratic problems. The citizens’ complaints are not sinking in, even if the signals are clear. Representative democracy is like a Titanic that is on the way down.

There is a desert between those who govern and those who are governed with a mirage of representation camped in the middle. The trade unions are weak, the parties worn out and the press is serving those in power more than readers.

But in this vacuum there are citizens who want to rouse from their slumber, test out other paths and restart democracy. Today, Italy is at a precipice, teetering but not toppled. The new beginning called for by Castells will not generate a government. The first changes will take time to come through. Meanwhile, those attached to their old habits will lament the ungovernability of the country. And from the 1970s they have been busy being afraid and not seeing the cracks that are splitting apart the stability that they say they crave.

Ungovernability is not new

In Europe, we’ve seen a spectacular case of ungovernability. It’s the case of Belgium. For 541 days, between June 2010 and November 2011, the country had no government. Quickly it became clear that it was not just a squabble between Flanders and Wallonia. The very structure of representative democracy was crippled. The Belgian experience is instructive because of its negative effects but also the passion of those who transformed it.

In the 18 months of stasis, the caretaker government ruled, with a straight face, with its obsolete majority. It approved a belt-tightening budget in 2011 and held a six-month European presidency in 2010. It even took part in the Libyan war. In Italy it would be like extending Monti’s stay: a unsatisfactory result for those who won at the ballot box by promising to “innovate or die”. The nation states are collapsing. Europe is not yet a federation of solidarity and the status quo is safe and sound. The lack of government creates an unheard of power, freer vis-a-vis the sovereign people: it’s a bit like the automatic pilot that, according to Draghi, protects stability from the “excess” of citizen demands.

But the Belgian experience has also produced major novelties. Aware that democracy was at play, citizens made their move. They began to experiment with the structures of the ancient Greek agora, and the Popular Action that goes back to “actiones populares” of Roman law: Citizens can push for their interests, not their personal ones but those of the community. And as they are the holders of sovereignty in democracy, they will be the ones to invent measures focussed on the common good. There is no other way to defeat real anti-politics: the predominance of the markets and austerity that impoverishes without reducing debts and divides Europe.

We are the state, says Beppe Grillo’s Five Star Movement in Italy. And the idea of the movement emerged from the Belgian lack of government. It is called G1000 and emerged during this period of ungovernability thanks to four people; an archaeologist, a sustainable economy expert, a political scientist and an actress). The first summit of the 1000 was held on November 11, 2011, in Brussels. The founding manifesto makes a list of the flaws in representative democracy and suggests remedies.

End of the status quo

It is not about destroying representation, the delegation of powers or “taking the parties’ job away”, they say in their manifesto. What needs to come to an end is the status quo: the hijacking of the institutions by the parties and – in the age of the internet – traditional journalism. “In all fields, innovation is encouraged except in democracy. Companies, scientists, sports people and artists have to innovate but when it comes to organising society we still go back, in 2011, to the 19th Century.”

It is one of the first European examples of deliberative democracy. Deliberating is about discussing and then deciding and, according to the manifesto of the G1000, it is more effective than referendums: “In a referendum, you’re limited to voting whilst you need to talk and listen too in a deliberative democracy.” The postmodern idea of acting in a communicative way, as thought up by Habermas in 1981, is taking shape. The phenomenon is continental and not just Italian. It is hoped that it will have its influence in the European Parliament elections in May 2014. It is hoped that the future head of the Commission, who will sit with the austerity troika, will be chosen by the citizens.

It’s difficult to experiment and to start again. Even representative democracy was difficult to achieve as was proposing universal suffrage in the 19th Century. The only thing that cannot be done is to say no to the experiments, behaving as though you are defeated like Adenauer. Real experiments, those that use people as the means and constitutions like rags, are taking place in Greece, which is mired in austerity, or in Cyprus, where stability means ransacking the bank accounts of the citizens, whether they’re rich or not.

What else can be done if not experiment with what the active citizenry are asking to be tested. It would be ungovernable to continue to see their demands as “excessive”.

If the pope is going back to his roots by calling himself Francis, maybe it is also time not to confuse the latter with the vanquished. Maybe it’s time to go back to the agora of Athens and to the People’s Action of ancient Rome.