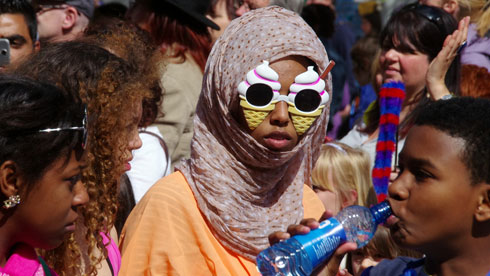 This English city leads the world as the metropolis with the largest variety of languages spoken as a proportion of the population, according to a recent study. Can this asset translate into an economic rebirth for the region, which once symbolised British industrial decline?

With more than 150 languages spoken by a population of 480,000 people, Manchester is the city with the most dense linguistic diversity in the United Kingdom – even the world, at least compared with the other cities of comparable size. A true Tower of Babel, where four out of 10 residents speak different languages, some of which are very rare, such as Nahuatl, of Aztec origin, and Eleme, a Nigerian dialect spoken only by 3,000 people in the world. Heading the list (after English of course) is Urdu, spoken by 10,000 people who originate from the Indian subcontinent. There’s also Arabic, Chinese, Bengali, Polish, Punjabi, Somali...

This colourful portrait emerges from research conducted by a team from the University of Manchester, brought together for the project Multilingual Manchester, quite unique in its nature and scope. The group, after analysing a wealth of data provided by the authorities and local services (schools, libraries, hospitals, official censuses etc), has produced more than 100 reports on multilingualism and linguistic minorities since 2010. A summary of them has just been published.

Among other statistics, 3,000 students from schools in the city chose to take their “General Certificate of Secondary Education" in a language other than English in 2012; [[20,000 non-English books and other media were lent out more than 70 times in one year by the municipal libraries]]; and more than 12,000 messages in 50 languages have been tweeted in two months.

The polyglot nature of Manchester is not a discovery in itself. Immigration started as early as the second half of the 19th Century, when this centre of the industrial revolution attracted workers from throughout the world. Even today Manchester has seen its population grow more rapidly in recent years than any other city in the UK except for London, with a growth rate of 19 per cent between 2001 and 2011 (compared with an average of 7 per cent for the UK). A total of 1,500 school age children continue to arrive in the city each year.

Estimates of "Multilingual Manchester”, however, exceed the official figures known so far, probably skewed by the predominance given to the notion of “main language", which underestimates the plurality of the languages spoken by each individual. In the census carried out in 2011 in England and Wales, "only" 20 per cent of the inhabitants of Manchester reported speaking a main language other than English.

This very significant multilingualism, however, does not affect linguistic integration. Eighty per cent of residents whose first language is not English say they speak good or even very good English. The percentage of people who report not mastering the national language at all is only 3 per cent. The 17 per cent who said did not feel quite at ease in English is made up mainly of the elderly.

On the contrary, according to this research, this linguistic diversity could be a real richness. Interaction between all of these language groups facilitates religious dialogue and social cohesion. [[The demand for and supply of interpreters, translators, school assistants etc, brings benefits]]. The multilingualism of the city allows local businesses to expand contacts and engage in business internationally. The ability to speak several languages is increasingly sought after in the labour market, while the presence of a young, educated and polyglot population will eventually attract multinational companies.

The city also benefits from this resource without a great need for public investment, since passing on this linguistic knowledge essentially relies on families and communities. A total of 8,000 students attend language courses organised by some 50 groups, while many community centres offer their members other types of services.

Public authorities limit themselves to adopting a pragmatic and decentralised, reactive rather than proactive strategy, adapting to demands on a case-by-case basis: providing documents in several languages, offering the possibility of using interpreters, certifying linguistic knowledge, etc. The wisdom of local institutions is shown nevertheless in choosing not to discourage languages of origin, neither in the public nor private sphere, while working to facilitate the learning of English.