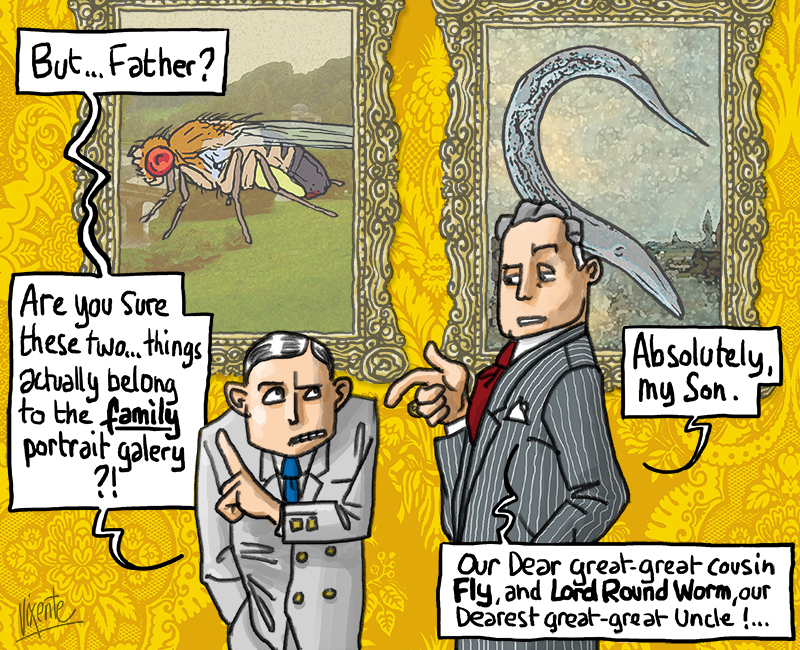 Protecting the environment with flies, worms and the theory of evolution

For ethical reasons it is necessary to limit as much as possible the testing of potentially toxic chemicals on mammals. A group of European scientists within the PrecisionTox project are turning to flies and worms.

Did you know that fruit flies share 60% of the genetic ancestry with humans? This surprising information can significantly impact health and environment protection, but first “we must replace an entire theater of ideas and practices, beginning with how we view and use animals in science to understand toxicology” said Prof. John Colbourne, from the University of Birmingham.

As humanity is dealing with a pandemic, chemical pollution still accounts for over one in every ten premature deaths in the world yearly, and risk assessors have been striving to address the environmental health crisis.

Chemical safety evaluation relies mainly on mammalian testing and is a costly, time-consuming and a painful process. In the European Union (EU), since the entry into force of the REACH Regulation – the main legal instrument to evaluate and manage chemicals – the cost of registering 22 683 substances so far sums to about 2,1 billion €, plus millions of animal deaths, and several years per chemical to complete the entire assessment procedure. Chemical’s production and consumption is expected to double by 2030, and there is a danger that chemical safety testing may follow the same pace.

However, evidence demonstrates that mammalian models are not reliable enough to ascertain risks to human health. According to the United Stated National Institute of Health (US-NIH), in the pharmaceutical sector, 95% of drugs effectively tested on animals fail in human trials. Interestingly, the genetic basis for a cure found for Alzheimer’s disease few years ago came from... flies.

More : How Non-Animal Testing Can Reshape Health and Environment Policies

It is critical that alternatives to mammal animals be found, which are faster, less expensive, and more ethical and precise at determining harm to humans and the environment. What if the solution to accelerate and improve safety testing lies in applying principles and knowledge from evolutionary biology and medicine?

“Nothing in biology makes sense except in the light of evolution” said Theodosius Dobzhansky, a central figure in the history of biology in 1973.

The sequencing of the human genome, which contains all inherited information coding for life, sparkled a revolution in healthcare with the advancement of personalised medicine. It enabled the development of “NAMs”, standing for “Non-Animal Methods” or “New Approach Methodologies”, such as human cell cultures, bio computation techniques, and human organ-on-chips technology to name a few. The studies of distantly related model species, such as flies or worms, have uncovered many basis aspects of animal biology, including on human health; the progresses of genetics and evolutionary ecology can now be harvested to understand the toxic impact of pollutants on humans and the ecosystems.

Prof. John Colbourne, from the University of Birmingham, is coordinating a team of 108 researchers in the EU-funded project PrecisionTox that will break this virtual divide between medicine and toxicology – including ecotoxicology – to bring about a more mechanistic and evolutionary understanding of how animal biology is perturbed by exposure to chemical pollutants without experimenting on mammalians.

The project relies on human cell lines and a suite of five organism models from across the tree of life who share inherited genes by a common ancestor together with humans: round worms, fruit flies, water fleas, and embryos of frogs and zebrafishes. The use of these “non-sentient” organisms is accepted in the list of NAMs, since they are not considered animals as by legal standards.

Despite their obvious morphological differences, many of the mechanisms that govern the development or drive cellular and physiological processes are conserved between these organisms and humans by evolution. The round worm, or C.elegans, is a long-used model for cellular, developmental and molecular aspects of the effects of toxicants on growth, development and gene expression. Although the evolutionary divergence of Homo sapiens and Drosophila melanogaster happened approximately 780 million years ago, about 75% of known human disease genes have a match in flies, which makes it an important model for neurological diseases, cancers, or even diabetes.

It is critical that alternatives to mammal animals be found, which are faster, less expensive, and more ethical and precise at determining harm to humans and the environment.

The consortium will study how genes and the products resulting from the expression of genes interact in these different species exposed to an environment-relevant concentration of substances, to identify the mechanisms that adversely responds to chemical exposure through the light of the phylogenetic tree. The data will then be compared to human cell lines and other databases to confirmed the predicted chemicals risks for human health.

The short reproduction cycle and lifespan of these organisms ensure the generation of exploitable results in few months, dramatically reducing time and costs. This methodology furthermore enables to identify genes responsible for a greater resistance or susceptibility to toxicants, for an accurate definition of safety exposure limits, taking into account the genetic variation in the population, including gender. The 15 partners aim to test 250 chemical compounds throughout the 5 years of the project. The methods can however be applied to any chemicals and for all animals, including humans, thus promising to better identify, regulate and ultimately remove harmful chemicals from people’s home, food and the environment.

PrecisionTox has joined forces with ONTOX and Risk-Hunt3r, two other EU-funded projects, in the ASPIS cluster which will kick off on 4th of November in a public event. Together, they represent 70 research organisations across Europe and North America accounting for €60 million of the H2020 program. ASPIS will work closely with the EU Joint Research Center towards the development and validation of NAMs to accelerate chemical assessment without the use of mammalians to be able to deliver the “zero pollution” environment by 2050 promised in the EU Green Deal.