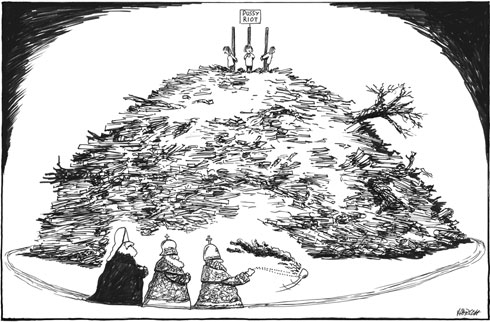 Since the opening of the trial in late July againt the three members of the Russian feminist punk band, Pussy Riot, the number of sympathy demonstrations showing solidarity with the women has soared. Tolokonnikova Nadezhda, 22, Samoutsevitch Ekaterina, 30, and Maria Alekhina, 24, have been detained since March for singing a "punk prayer" in a Moscow cathedral that criticised Russian President Vladimir Putin. Charged with "hooliganism" and "incitement to racial hatred", they risk three years in a labour camp.