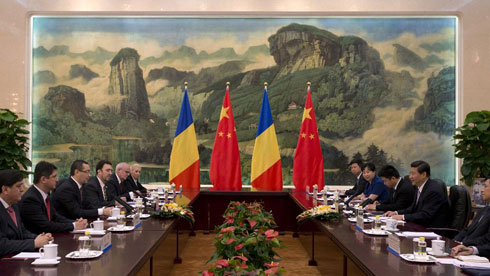 Romania looks to the east

A visit to Beijing, followed by another to Moscow: in the space of a few days, the Romanian government has reached out to two major powers that it used to view with mistrust. A Romanian journalist asks if the change of course is a matter of economic pragmatism or shifting ideologies.

Romania has recently played some important hands at the world diplomatic tables in Moscow and Beijing. Bucharest has opened up new foreign policy axes, which could either complement, compete with or undermine its pro-western policies, depending on the vision and the immediate interests of Romanian leaders.

Until now, Romania has been mistrustful of gifts from the east, which may have caused it to miss out on lucrative deals. But its strategy allowed it to preserve its westward political course and safeguard a maneuverability precious to country on the fringes of two words.

Pragmatism has abruptly taken precedence over these historical dilemmas, although it remains unclear whether this latest Romanian foreign policy about-face is based on a well-planned strategy, or if it is merely the result of knee-jerk responses to stimuli coming out of Moscow and Beijing. Two different equations are involved in dealing with Russia, which bases its diplomacy on long-standing grudges and easily-discernible commercial interests, and China, which is intent on developing its role as a world power and planting more flags on the map of its economic victories.

Romania’s foreign affairs minister, who was received with great pomp and ceremony as the envoy of a friendly nation in Moscow [between July 8 and 10], has signed up to a roadmap which includes a schedule for bilateral consultations in 2013-2014. He also returned home with a promise that gas imported from Russia will be cheaper, because there will be no more intermediaries.

[[But what is Romania offering in exchange for this new friendship with Moscow? Greater flexibility?]] Negotiations on the future of the Republic of Moldova? A two-way axis with Bucharest acting in concert with Moscow and Washington, an idea already suggested by former US president George Bush, who thought of Romania as a bridge between Russia and the West? Or a change of course?

For the Kremlin, Romania is a territory that has escaped from Russia’s influence, and one that is both ripe for reconquest and needs to be kept in check. The warming of relations with Moscow could act as springboard for the Russians or the Romanians, but it is hard to believe that both parties will emerge from this initiative as winners.

The dance with Beijing is more subtle. Initially, Romania stands to gain from Chinese investment, which will also be of benefit to China. As it stands, Prime Minister Victor Ponta was well-received in China [between June 30 and July 2], even if he did not return with clear promises and signed contracts. The visit marked a largely symbolic first step: Ponta has shaken hands with decision-makers who have the power to decide on major investments.

[[Beijing has long had a strategic map of countries where it wants to gain a foothold]]: states in which it has the potential to exert an influence on both national and regional policy. China is steadily conquering Europe, and the US dollar is dependent on Beijing. While the collapse of the Chinese economy, which has been predicted by numerous western analysts, has yet to come about, the economic expansion of this major power is increasingly focused on resources in Africa and Latin America.

On his first official trip to Europe, the Chinese prime minister offered Germany “a match made in heaven” and then persuaded Switzerland to sign up to a free-trade agreement. Zurich, a city of major banks, wants to become the European centre for transactions in the renminbi, the currency of communist China, while the Chinese insurer Ping An recently bought Lloyd’s headquarters, the most famous building in the City of London. Greece’s largest port, Piraeus, is also controlled by the Chinese, who have also bought half of the companies in Iceland as well as some of France’s most famous vineyards.

These are business transactions, but also conquests with a deeper significance. China aims to show that it can dominate the globe using the peaceful means of soft power, not that it has neglected to build up its military arsenal. Its affirmation in world affairs has been achieved through viable and courageous projects.

For example, between now and 2025, China wants to build a railway linking Shanghai and London. In the meantime, it also wants to tempt other countries in the buffer zone [between Europe and Asia], which could be of medium to long term interest. It has the Balkans in its sights. Until now, Romania has tried to keep its eyes fixed on the West and to flee gifts offered by Beijing, sacrificing a number of opportunities while conserving a greater margin for manœuvre in the future.

Romania has turned to the east at a time when Russia and China are developing their own axis of power. The same days that saw Beijing and Moscow conducting joint naval exercises, Romania’s prime minister and foreign minister were there, cosying up to top officials of the two giants.