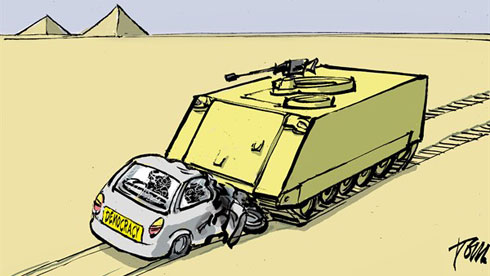 Facing the violent repression of the supporters of the ousted president Mohamed Morsi by the Egyptian military, EU members are struggling to come up with a common stance. However, the EU does have means to get the parties talking – by suspending economic aid to the country.

A large-scale crime has been perpetrated in Egypt. The assault by the forces of order on August 14 against the camps of pro-Morsi protesters in Cairo led to a bloodbath. The outcome has been disastrous: according to figures that remain uncertain, more than 500 people have been killed across the country. [The number is now closer to 1,000.]

Suspected since the overthrow of President Morsi on July 3, it can now be safely assumed that the Egyptian army has launched a coup d 'état, and General Abdul Fattah al-Sisi has crushed the fragile institutional system that was supposed to lead to elections. Democracy, and elementary norms protecting human rights and the right to demonstrate, have been trampled upon.

It is not fate that is leading Egypt to this tragic alternative of dictatorship or civil war. International mediations, notably those of the European Union, and warnings from America have attempted to prevent this worst-case scenario. Right up until the last minute, another way was possible: an agreement could have been reached between the team around Al-Sissi and the Muslim Brotherhood. Radicalisation and the extreme polarisation of the two camps have plunged Egypt - and the Middle East, a region beset by torments - into unpredictable chaos.

What to do? International condemnations have followed thick and fast. But are words enough? Despite the snub to the United States inflicted by the Egyptian military, one can understand the Americans’ reluctance to suspend their aid to Egypt (€1.3 bn per year) which has underpinned the peace agreements with Israel for more than 30 years. Mr Obama, known for his desire to disengage from the problems of the Arab-Muslim world, chose a measured response, cancelling joint American-Egyptian military exercises, but without cutting off the flow of money.

Europe has more freedom to manoeuvre. The killing in Cairo has provoked a strong reaction, in keeping with the support shown since 2011 for the hopes of democratisation in the Arab world. In the past, the European Union has brought down sanctions because of other massacres committed by authoritarian regimes, whether in Sri Lanka, Zimbabwe, Burma or Belarus.

One can legitimately expect that the 28 draw the right consequences from the killing in Cairo. To be explicit, that they suspend the €5bn in aid promised to Egypt. This sanction should be kept in place until a dialogue begins and democratic mechanisms worthy of the name are restored. To do less would be to skirt our responsibilities.

Certainly the weight of external actors in the fires consuming Egypt is relative, and there is no shortage of arguments to show how westerners have been left on the sidelines. In Egypt, the wrongs are no doubt shared out among all parties: the Morsi interregnum was not by any means a period without problems, and the mobilisation of the crowds before the overthrow on July 3 of the first democratically elected president of the country drew in all those angry at the downward spiral, including the repressive slant, of the Muslim Brotherhood once in power.

But the choice made by the camp around Al-Sissi to massacre protesters and to engage in the worst abuses against civilians constitutes an unacceptable turning point that calls for a penalty. Europe must suspend its aid. It is a matter of principle.

Warnings are indispensable but useless

EU leaders "were right" to say that the recent violence in Egypt can neither be justified nor tolerated, says German daily Frankfurter Allgemeine Zeitung, following the stance taken by the Presidents of the European Council, Herman Van Rompuy, and of the Commission, José Manuel Barroso. FAZ remains, however, sceptical of the measures available to the EU to make the violence cease.

Relations with the military leaders in Cairo can be frozen and they can be punished by withdrawing aid. [But] their response is predictable: they will not tolerate having [the EU] meddle in internal Egyptian affairs. They will ignore calls for dialogue and will make it known that they can find partners elsewhere, in Moscow, for example. [...] That does not mean that these warnings should be abandoned [...] but no one should get ideas as to their success – especially if neither the Muslim Brotherhood nor the military want to follow a path capable of leading to a civic system that includes several differing political forces.