After passively submitting to the crisis, young Spaniards have finally taken to the street. Breaking out on the eve of municipal elections, the protests of recent days have been inspired by those in Iceland that led to the fall of the government in Reykjavik.

"System error". Protestors at demonstration organised by ¡Democracia Real Ya!, Madrid, 17 May. 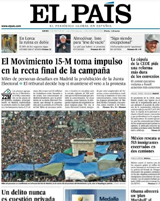 One morning in October 2008, Torfason Hördur turned up at what Icelanders call the “Althing”, the Icelandic parliament in the capital city, Reykjavik. By then, the country's biggest bank, the Kaupthing, had already gone into receivership and the Icelandic financial system itself was in danger of going under. Torfason, with his guitar, grabbed a microphone and invited people to talk about their dissatisfaction with the freefall of their country and to speak their minds.

The following Saturday Torfason’s initiative brought dozens of people back to the same spot. Those Saturdays in the autumn of 2008, rallying to the People's Voices movement, led to the proclamation to dissolve Parliament on January 23, 2009, and to hold elections. Now the murmur of the Icelanders has reached the throats of the thousands of demonstrators that gathered in several cities around Spain on 15 May: “Spain arise, another Iceland", "Our model - Iceland" were some of the yells from the crowds.

The Icelanders didn’t leave it at this. They shook the foundations of the government, went after the bankers who led them into bankruptcy and said ‘No' in a referendum on repaying debts of some four billion euros to the UK and the Netherlands. Better still: they formed an assembly of 25 citizens elected to carry out constitutional reform. It was an entirely silent revolution that, while the media was focused overwhelmingly on the Arab uprisings, was rescued from oblivion by a web of social networks beyond the control of a state.

A movement spawned by the internet

But those voices calling for real democracy are not just being raised in Iceland, a country of about 320,000 inhabitants. Here in Spain, the umbrella organisation for various Spanish movements - Democracia Real Ya (Real Democracy Now) - already lists among its proposals some 40 points ranging from controlling parliamentary absenteeism to reducing military spending through to abolishing the so-called Sinde law (a law restricting on-line infringements of copyright).

To this federation some 500 organisations from all sectors have rallied. But not one single political party. Not one union, either. The demonstrations have broadened spontaneously, as was the case for those who rallied under the umbrellas of the "alternative globalisation" movements, and have evolved, one decade after the World Social Forum in Porto Alegre, Brazil, on a more modest stage than the one demonstrators faced in the past at the World Economic Forum of the global elite in Davos, Switzerland.

All this is happening at astonishing speed via the Internet, which has amplified the echo of discontent and opened the lanes of cyberactivism to groups such as Anonymous, notable for intervening against companies like PayPal and Visa during the advocacy campaign for Wikileaks chief Julian Assange. Yet it was also there at the beginning of the revolts in the Arab world, to help people get round the censorship of the Tunisian and Egyptian dictatorships.

When we grow up, we want to be Icelanders

Revolts that have grown and matured while French, Italian, English and Greek youth have been surging into the streets to oppose plans for the social welfare cuts that have been Europe’s response to the sharp economic downturn. Spain was waiting for its moment.

The first to get off to a start was Nolesvotes (Don’t vote them in), an initiative calling on the electorate not to vote for Spain’s mainstream parties, accusing them of taking advantage of electoral law to perpetuate, in Parliament, “alarming levels of corruption in Spain." There followed calls to parties from web movements such as Avaaz and Actuable to strike from their electoral lists all politicians indicted or convicted of corruption. And the nearly 2,000 young people who supported the Juventud sin Futuro (Youth Without a Future) marches of April 7 have carried on from that first modest attempt, which by May 15 had grown into the popular outcry that exploded in several Spanish cities.

“When we grow up, we want to be Icelanders!" cried one of the leaders of the organisation during the march on Sunday May 15 before a column of young - and not so young - parents and children, students and workers, the jobless and pensioners. Many Saturdays in Iceland were needed before citizens won the changes they had demanded. Spain’s first Sunday has taken place, and was followed by a Tuesday [May 17]- but there’s still a long way to go.

Translated from the Spanish by Anton Baer

A movement that caught political class by surprise

The “15-M” movement takes its name from the demonstrations that rallied thousands of students, pensioners, low-paid employees and disgruntled citizens in fifty Spanish cities on 15 May, under the slogan “No les votes” (Don’t vote them in). Responding to the appeal from the Democracia Real Ya platform, they have mobilised through social networks like Twitter (#Spanishrevolution and #nolesvotes) and through Facebook. The organisers have decided to repeat the protests each night right up till Sunday, May 22, when local and regional elections are to be held.

On May 18, the electoral commission declared illegal the rally at Madrid’s Puerta del Sol, as it could "affect the election campaign and the rights of citizens" to vote freely. But the "outraged" have decided nonetheless to carry on with their occupation of the square. “Outlaws", led ABC on its front page. The conservative daily believes that, yes, "there are reasons to be discontented faced with the crisis," but that "objectively", the responsibility is borne by "a leftist government, and not ‘the system’ called into question by the demonstrators.” The latter, "sociologically on the left," are demanding not a “change of government but a rupture, which is a way of contracting and distorting the democratic framework: either the left, or reform of the system."

"The government allows the banned demonstration to go ahead and the PSOE [the ruling Socialist Party] supports the protests", is the angry headline from El Mundo. In this other conservative daily, Victoria Prego emphasises that "surprisingly, the demonstrators did not direct their protests against the government, but against the dominant system, without identifying those accountable." Public opinion on the other hand, as revealed by polls, holds the government responsible for the current crisis. However, Prego adds, political leaders are not concerned about average citizens, "because they have not come out into the street – which is the thing, in fact, that they are afraid of, and it even makes them panic."