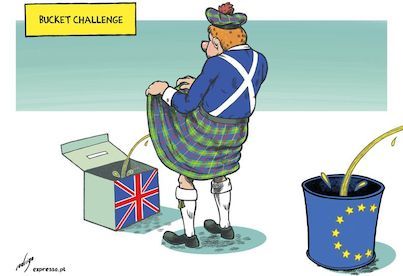 The costs and benefits of independence

According to economics Nobel prize laureate Joseph Stiglitz, there should be no fear of Scotland’s independence, as it would surely bear come costs, but also some significant benefits. In an op-ed published in The Scotsman, Stiglitz says that “there is, in fact, little basis for any of the forms of fear-mongering that have been advanced”.

First of all, Stiglitz he has no doubt that an independent Scotland “will still be part of Europe”. He also believes that currency is “a non issue”:

There are many currency arrangements that would work. Scotland could continue using sterling – with or without England’s consent. […] Because the economies of England and Scotland are so similar, a common currency is likely to work far better than the euro – even without shared fiscal policy.

it is clear that there is, within Scotland, more of a shared vision and values – a vision of the country, the society, politics, the role of the state; values like fairness, ­equity and opportunity. […] The Scottish vision and values are ­different from those that have become dominant south of the Border. Scotland has free university education for all; England has been moving ­towards increasing student fees, forcing students with parents of limited means to take out loans. Scotland has repeatedly stressed its commitment to the National Health Service; England has repeatedly made moves towards ­privatisation.

So, concludes Stiglitz, “independence may have its costs – although these have yet to be demonstrated convincingly; but it will also have its benefits”: Scotland could decide where to make investments and how to “recapture more of the benefits from them through taxation”. The difficult question that Scotland has to face is

whether Scotland’s future – its shared vision and values, a shared ­vision and values that has increasingly departed from those dominant south of the Border – will be better achieved through ­independence.

The main issue is, according to Stiglitz, what would happen “should Scotland stay in the UK, and the UK leave the EU”. In his opinion, “the downside risks are, by almost any account, significantly greater”.