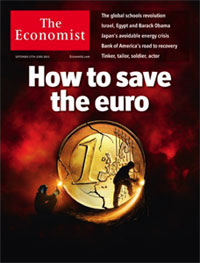 The Economist calls for “act of supreme collective will”

“How to save the euro”. In a very long and detailed piece, The Economiststates that “the only way to stop the downward spiral now is an act of supreme collective will by euro-zone governments to erect a barrage of financial measures to stave off the crisis and put the governance of the euro on a sounder footing.”

For this, the London weekly considers that “a rescue must do four things fast. First, it must make clear which of Europe’s governments are deemed illiquid and which are insolvent, giving unlimited backing to the solvent governments but restructuring the debt of those that can never repay it. Second, it has to shore up Europe’s banks to ensure they can withstand a sovereign default. Third, it needs to shift the euro zone’s macroeconomic policy from its obsession with budget-cutting towards an agenda for growth. And finally, it must start the process of designing a new system to stop such a mess ever being created again.

“Based on proper stress tests (which should this time include possible default on Greek sovereign debts)”, a European banks recapitalisation should be supported by “a commitment from the European Central bank to provide unlimited liquidity for as long as it is required”. The ECB should also “declare that it stands behind all solvent countries’ sovereign debts and that it is ready to use unlimited resources to ward off market panic.”

Realising that “the sobering truth about the single currency is that getting in is a lot easier than getting out again”, one has to recognize that a German withdrawal from the common currency “would be just as terrible” as a Greek one. And for The Economist, “the issue now is not whether the euro was mis-sold or whether it was a terrible idea in the first place; it is whether it is worth saving. Would it be cheaper to break it up now? And are the longer-term political costs of redesigning Europe to save the euro too great?”

“The Economist concedes that our rescue plan begins with a democratic deficit that needs to be fixed if steps towards closer fiscal union are to work”, the article adds. “But there must be ways for good governments to force bad ones to keep in line that do not require the building of a huge new federal superstate.” And at the end of the day, “the alternative may be the collapse of not just the single currency but the single market and the whole European project.” And on this issue, concludes The Economist, the last word will be with the German electorate.