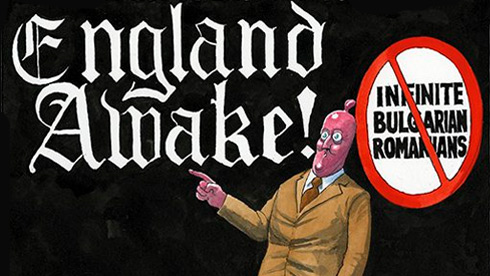 With one month to go before the British job market is thrown wide open to Bulgarians and Romanians, the UK prime minister is calling for fresh restrictions against those who might be tempted to take advantage of the largesse of the British welfare system. “We are very useful barbarians”, is the bitter reaction of a columnist in Sofia.

“The twilight of the evening has fallen, but the barbarians have not shown up. Emissaries who have just returned from the border say: ‘There are no more barbarians. What will we do without them? They were so useful for solving our problems’” Thus ends the poem “Waiting for the Barbarians” by the Greek poet Constantine Cavafy (1863-1933).

These days the wealthy countries of western Europe have rediscovered the millennial threat of the barbarians – this time around in the guise of their poor relatives from the east of the continent. Last week, the British PM David Cameron pulled a series of measures from his sleeve aimed at limiting the access of Romanian and Bulgarian nationals to the labour market and to Britain’s welfare benefits following January 1, 2014, when the last restrictions should finally disappear.

This quarantine decreed by London provoked a fairly mild protest from Brussels and a reaction from the Bulgarian diplomatic corps that was a little more energetic than usual. Over the next few days, Germany and France joined Britain in putting up additional restrictions on Bulgarians and Romanians. The grand coalition of Angela Merkel, bringing together left and right, is committed to putting an end to “unjustified claims for access to welfare”. The Socialist government of François Hollande in France has also announced that it is moving in this direction.

[[When the three most powerful countries of the EU decide at the same time to put up barriers, something significant is going on]]. In the first half of 2012, the Germany took in some 550,000 immigrants, an increase of 11 per cent over the same period the previous year. Two-thirds are EU nationals, and a majority of them are from eastern Europe. But Berlin has also taken note of the upswing in immigration from southern Europe: up 39 per cent for the Spanish, 41 per cent for Italians and 26 per cent for the Portuguese.

Of course, these migrants working abroad pose no danger to a country of 82 million people, but they do indicate a disturbing trend. First, the debt crisis, which has hit the south of the continent particularly hard, has caused an influx of immigrants from those countries, to which we can add the eastern Europeans. Secondly, nationalist, isolationist and anti-European Union parties are playing a more important role on the political scene in northern and western Europe these days. In the United Kingdom, the Independence Party (UKIP) of Nigel Farage is becoming more prominent in the debates, and if it lacks members in the British Parliament it is only because of the peculiarities of the majority-vote system.

Surveys in Britain show that opinions on the subject are becoming more and more radical, and many are found in a party that is even more extremist, the British National Party (BNP). In France, it is the dynastic party of Jean-Marie Le Pen, the FN, that has the wind in its sails, forcing some ministers, like Manuel Valls, to set the tone for particularly brutal campaigns against the Roma. In Germany, extremist leanings are still under control, thanks to particularly stringent legislation.

In short, the Europe of 2013 is very different from the Europe that Sofia and Bucharest joined with great fanfare back in 2007. Gone is all the talk about the unity, finally restored, of the Old Continent, or of the civilising virtues of democracy and the market economy.

Instead, poverty-stricken immigrants (mostly the Roma) from Bulgaria and Romania have become easy prey for the sensationalist newspapers and the tabloids. A little like the Syrian refugees in Bulgaria at the moment...