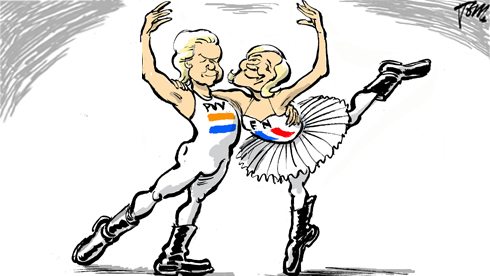 ‘The extreme right attempts to unite’

Six months ahead of the European elections, populist movements are boosting contacts among themselves with the aim of uniting ahead of the elections and of forming a group in the new Parliament. On November 13, the leader of the French National Front, FN, Marine Le Pen, met with Geert Wilders, leader of the Dutch Party for Freedom, PVV. This has some worried, including the Dutch press.

"People like Le Pen. How horrible," said Geert Wilders, the leader of the (right-wing populist) PVV in 2007 of the leader of the (extreme right-wing populist) National Front, notes Dutch daily NRC Handelsblad. Although, after the 2009 European elections Wilders did ban his members from sitting next to the FN MEPs so as not to be associated with the extreme right, he now seems to have watered down his principles. On November 13, the PVV leader met with Marine Le Pen to form an alliance ahead of next year's European elections, but some of his members are sceptical due to ideological differences. Despite some common ground – both are Eurosceptic and opposed to immigration – the PVV's pro-Israel and pro-homosexual positions do not appear to be shared by the FN. The paper notes that within the PVV,

for the moment, critical voices have not been raised in public because they saw what happened to their colleague [Louis] Bontes [recently expelled for having publically criticised the leadership]. But if Wilders continues to cooperate with Le Pen as well as with [Heinz-Christian] Strache, the leader of [Austria's right-wing populist] FPÖ, there is a good chance that some members of the PVV will end up leaving the movement.

De Volkskrant, for its part, notes that Dutch traditional parties are unable to provide a "firm response" to the PVV's Eurosceptic claims –

Defenders of the EU and of the euro are running very late. It is about time they take up the challenge, as Wilders did, through convincing candidates and credible policies. [...] Instead, however, the [traditional] parties are presenting unknown candidates to head their electoral lists and are counting on low participation in the ballot to limit the damage. This is disdainful towards the voters and this disdain will only increase their alienation from the European project.

In Trouw, an Arabist has warned of the disastrous consequences that could flow from a strong alliance between the FN and the PVV. While that would amount to a "win-win situation" for the two parties,

it would be nothing of the sort for the countries of Europe. The FN as well as the PVV intend to disseminate the extremely nasty ideology that is xenophobia. And once this poison is absorbed into European's genes, it will be difficult to get rid of, as we have learned from our very violent history.

In France, Le Monde believes that the goal of Marine Le Pen and Geert Wilders is straightforward: "the European far-right is seeking to federate to create a group in the European Parliament after the elections of May 2014". However, the daily notes,

the bar is set high, and the goal of the two Europhobic leaders has not yet been reached. That’s because, to form a group, they will have to get 25 members elected in at least seven countries of the European Union. At the moment, they need two more countries. In their move they can count on the members of the European Alliance for Freedom, among which belong Marine Le Pen [...] the Austrian FPÖ [...] the Belgian Vlaams Belang, and the Swedish Democrats. A technical meeting, without the leaders, is to be held on Thursday, November 14 in Vienna.

The FN-PVV agreement is raising some concern in Central Europe as well. For the Slovak SME, Marine Le Pen and Geert Wilders are not to be relied on –

They speak of freedom and democracy, claim to espouse liberal values, and would almost militate for the rights of women and homosexuals. But they do that for only some people: their own. They are hostile to Eastern Europeans and to Muslims, even more hostile to immigrants, and they loathe the loss of sovereignty, which is flowing to Brussels. […] The far-right parties are also on the resurgence in Scandinavia. […] Burying one’s head in the sand when faced with populism only reinforces the problem.

But in Scandinavia, fittingly, things might not be so simple. The Danish People's Party immediately turned down the offer of Le Pen and Geert Wilders to join the Eurosceptic alliance formed on November 13, explains the Copenhagen daily Politiken. In the eyes of the Danish populist party, the FN has "deep roots in anti-Semitism." The vice-president of the party, Søren Espersen, has even said he was shocked that the Swedish populists would even consider this offer. In conclusion, Politiken writes,

Marine Le Pen and the National Front may indeed have enchanted the French. But not the Danish populists.