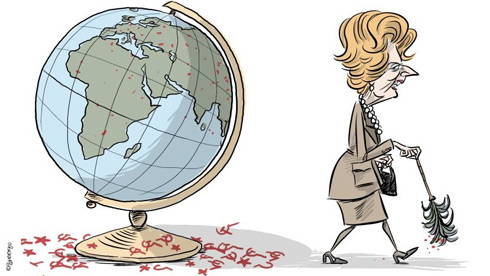 The face of the conservative revolution

Adored by those who appreciated her style and uncompromising policies, hated by others for a lack of empathy and her ultra-free-market liberalism, Margaret Thatcher left no-one in Europe indifferent. Following her death at the age of 87, the European press reacts with a wide range of feelings.

The ‘Iron Lady’ leaves a legacy that is still even now felt well beyond Britain’s borders: her relationship towards the EU, initially open, increasingly strained, ultimately turned hostile. Even today, a civil war rages inside the Tory party over [the United Kingdom’s membership in the EU], an issue which may well end up splitting the Conservatives.

The right-wing Italian daily Libero bids farewell to “the Iron Lady that Italy could now use.” “Thatcher leaves us alone with the Merkel-euro nightmare,” the paper headlines, and asks: “What kind of Europe would we have now if Thatcher had not resigned in 1990?”

Would it have turned out the same way, crushed under the heel of Merkel’s Germany, with the common currency, the fiscal compact and everything else that is choking us? Probably not. [...] That lady, who resembled an aged aunt, would never have allowed a Europe like the one in which we live today. She considered Maastricht federalism a son of the type of socialism she had always fought against. [...] She saw the euro as a loss of sovereignty. She didn’t like the fideistic creed of some federalists. She wanted a united Europe, not a dead or soulless one. [...] What many others came to realise 20 years later, the Iron Lady had already imagined – and, alas, fought against in vain.

For Libération, it is “the Grim Robber” who has departed. The left-wing daily does not hide its aversion towards the woman who “invented an ideology: Thatcherism, that continues to thrive, despite its manifest failures.” “The crisis of the 2000s is also the crisis of Thatcherism, which her henchmen carried to extremes,” the newspaper adds.

For 11 years, she embodied the triumphant free-market liberalism of the 1980s. A few simple ideas that she knew how to peddle like a new Gospel: glory to privatisation, deregulation, especially of the financial sector, labour flexibility – and attacks, typically, against trade unions. She applied these ideas with the conviction of a preacher, promulgating them with her famous ‘TINA’ (There Is No Alternative). The miners, the Argentines, the Irish hunger strikers – all fell victim to her unshakeable convictions. [...] She imposed her vision of society on her party and her country before pollinating the rest of the world with it, including Reagan’s America in particular, and the European left as well.

In Prague, Hospodářské noviny reports that, together with Ronald Reagan and Jean-Paul II, Margaret Thatcher helped dismantle the Soviet bloc and end the Cold War. This untouchable “icon of the economic transformation of Czechoslovakia”

pointed out the path from a rotting society to a dynamic one, grounded in market and individual freedoms. Recalling the euphoria of the revolutionary years of the 1990s, a highly idealised view predominates among the Czechs, who do not mention her conservative reforms and their consequences: the stifling atmosphere as well as the social crisis within the United Kingdom.

In Estonia, a former Soviet Republic, Margaret Thatcher’s pivotal role in the collapse of the Communist bloc is also stressed. Postimees qualifies her as an “anti-communism icon,” whose style of governance served as a model for many post-Communist leaders:

Her buzzwords, such as “minimal state”, “market” and “privatisation”, sold like hotcakes in the post-Communist countries of Eastern Europe. […] Thatcher was a Eurosceptic in her own way, without, however, stooping to populism. She predicted that a more integrated European Union would run into problems and was [a utopian project]; she saw it, instead, as a vast free-trade area. We will remember her primarily as the “Iron Lady” who, with [Ronald] Reagan, won the Cold War, brought down the Soviet Empire and continued to support us long after these events.

In Bucharest, Adevărul demolishes a few myths that have been circulating about Margaret Thatcher and her “very tough style of governance”:

“She was a formal and moralistic person.” Not true. She had a great sense of humour, and she was indifferent towards the behaviour of her male colleagues, who were often caught up in sex scandals. “She opposed European unification.” Completely false: Thatcher passionately defended European unification. In 1975 she led the “Yes” campaign [for accession to the European Community], promoted by the Conservative party. The Single European Act of 1986, which modernised the Treaty of Rome and expanded ECE powers, was her initiative. “Thatcherism has brought about the financial crisis.” Could not be more wrong: the banking deregulation that Thatcher advocated has nothing in common with the lack of surveillance that caused the crisis that started on Wall Street. The Lady was for strict banking regulations.