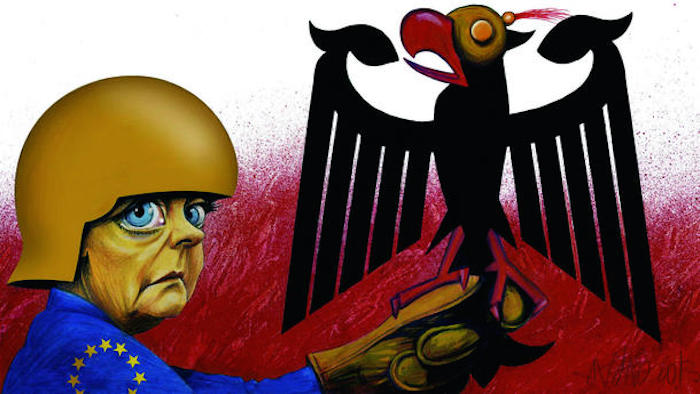 Where does Germany stand in Europe? And are its downtrodden southern neighbours justified in comparing its current dominance to the dark days of Nazi rule? These are the questions that a group of journalists attempt to answer in a special enquiry for German weekly Der Spiegel. They draw from Germany's troubled past to argue that Europe's “reluctant leader” paradoxically considers itself both too big and too small to fulfil its current role:

The eurozone is clearly ruled by Germany, though Berlin is not unchallenged. It does, however, have a significant say in the fates of millions of people from other countries. Such power creates a significant amount of responsibility, but the [German] government and other policymakers nevertheless sometimes behave as though they were leading a small country.

Germany has gained de facto political dominance through economic success, but is largely unprepared to take up real political leadership by compromising on its short-term interests, Der Spiegel's writers argue. Its diplomatic brashness is born out of an intransigent desire to see all eurozone members adhere to the German principles of thrift and efficiency. This is grist to the mill for the increasingly vocal opponents to German hegemony —

For almost all critics of German policy, a single word has become the focus of their complaints: austerity. It refers to policies of thrift, a concept that has positive connotations in Germany. But in European countries hit hardest by the debt crisis, it stands for a bleak policy of externally-imposed deprivation. Germany isn't just exporting its goods anymore, it is also exporting its rules.

Interviewing dissenting figures from Greece, Italy and France, Der Spiegel's team reports that the comparisons to the Third Reich stem from Germany's efforts to safeguard its own economic interests. While the newspaper discounts such comparisons, claiming "no one would actually associate Merkel with Nazism", it adds that "further reflection on the word "Reich," or empire, may not be entirely out of place." For Germany undoubtedly exerts a powerful influence well beyond its borders, imposing a politics of austerity on unwilling economic partners.

Historical precedents provide unsettling lessons for the current masters of Europe. Germany's Second Reich, formed under Bismarck and lasting until defeat in the First World War, found itself in a precarious position: it had become Europe's leading power and yet was not strong enough to dominate the continent alone. Germany, the authors argue, is in a similar situation today. Its trade surplus now stands at €217 billion, while capital exports from German banks have spread its economic interests across Europe. But while Germany towers over its neighbours, it is uniquely vulnerable to economic collapse in Europe's south. Once again, it is both too big and too small to lead effectively —

Creditors want to have power over their debtors because they are afraid. Afraid that they won't see their money again. Germany could pay Greece's debts, but not those of Italy and Spain.

The question remains of how Germany could better take up the mantle as Europe's most powerful nation. Der Spiegel's writers conclude with the opinion of Hans Kundnani, a London-based specialist on German foreign policy. "A real hegemon like the US," Kundnani writes, "doesn't just establish norms. It also creates incentives for those it rules over so that they remain part of the system." This requires creating a system that benefits all its members, abandoning short-termism for a more magnanimous economic policy.