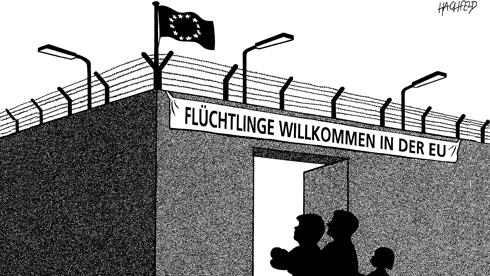 Italy is accused of having offered money to migrants from Africa to encourage them to move on to Germany. A scandal? No, writes Die Zeit: just the consequence of a policy that shuts its eyes to the drama of refugees and dumps the responsibility onto other countries.

Refugees welcome in the EU

Now the Italians are the bad guys too, for allegedly pressing €500 into the hands of a few Libyan refugees and sending them on to Germany. Now homeless in Hamburg, a group of the stragglers is living rough on the streets and confounding the city authorities. Where should they live now? In tents? In the crowded emergency shelters? Who is going to pay for that? And, most importantly: how to get rid of the problem in a hurry? Because the only option, of course, “is to send them back (to Italy)," as the [Hamburg] senator for social and family welfare issues Detlef Scheele hastened to assure the public.

We should, in reality, be grateful to the wicked Italians and the poor Libyans for coming to Hamburg. It’s a reality shock that we’ve earned, because the German refugee policy – or better said, the almost total absence of a genuine refugee policy – is a disgrace.

Not only Hamburg, but all of Germany makes it much too easy for itself. So comfortably far are we from the humanitarian dramas of this world, so calming are the many borders that shield us from them, that we can stare at them in shuddering astonishment from afar or just ignore them completely. The half-drowned North Africans on the Italian beaches, the starved Afghans on the Greek-Turkish border, the hundreds of thousands if not millions of Syrian refugees from the Syrian civil war in Turkey, in the Lebanon, in Jordan: terrible fates, for sure! But the main thing is that they do not catch us up in them.

Germany and the other countries in the geographical centre of Europe have barricaded themselves behind the so-called third-country regulation for decades already. It’s a legally correct but morally reprehensible and perfidious structure. Under it, refugees that reach such a safe third country – which means all the member states of the EU and many of its neighbouring countries – may proceed no further. Germany need accept no asylum applications from such people, because they have already reached safety. In practice, this means that the countries that happen to have the misfortune of bordering a crisis area or a sea that desperate refugees try to steer across are left to cope with the problem by themselves.

The Libyans and all the others do not come to Italy simply because they find the country so wonderful. They land there because it is, quite simply, the easiest European country to get to. Europe is their goal. And that is why all of Europe must look after them.

According to EU documents, a fair sharing of the burden is the goal; in reality, most countries are looking to slip out from under the load. The European refugee policy is a betrayal of Europe’s own ideals. Of shared responsibility and a humanitarian mission, there is nothing to be seen in it. The authorities in Brussels, notably the border agency Frontex, work especially hard to push the refugees even further away and expand the boundaries of Fortress Europe outwards. They pay to put up border fences and build detention centres in Turkey, to solve the problem before it reaches the member states themselves.

And what is Europe – in particular Germany – doing in the face of the huge refugee crisis in Syria? As good as nothing. Minister of the Interior Hans-Peter Friedrich refused for one-and-a-half years to take in any Syrians and it was only after the tireless protests of the Federal government's Human Rights Commissioner that, in the spring, he allowed 5,000 refugees into the country – but in June at the earliest, and also actually only orphans or those with relatives in Germany, preferably Christians. The lucky few are now being hand-picked from Syrian refugee camps. Hundreds of thousands will stay behind.

Of course, suddenly inviting all the refugees of the world to Hamburg would solve nothing. There is a balance, though, between a total opening of the border and the current walling-off.

The third-country rule, incidentally, goes back to the so-called German asylum compromise of 1992, which human rights activists still criticise today. At the time those negotiations were going on, asylum-seeker hostels in Germany were being burned down. Foreigners were dying from German xenophobia, and the politicians were discouraging the country from taking in refugees.

This has been a macabre, shameful failure right up to now. It is time to correct it.

‘Not the Europe we imagined’

“Italy is sending us African refugees”, notes an indignant Bild on its front page. With cries of “scandal”, the tabloid writes that Italy is doing it "because it can't cope with the flow of refugees coming from North Africa. [...] This is not the Europe we imagined."

"Several hundred have arrived in Hamburg and Bavaria, most of them homeless, having no right to work, to receive benefits or be housed, explains Bild, which is not reassured by news that refugees are to be sent back to Italy, adding that it is the German states that will have to pay for their return flights.

In Italy, La Stampa stresses that the original document sent by the German Interior Ministry to the regional immigration offices, on March 27, "did not mention any explicit invitation from the Italian authorities to the refugees to go to Germany ", but only "that they leave on their own initiative".