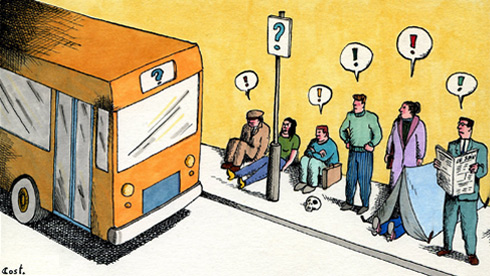 The Green City not yet on the right track

Despite Tallinn public transport becoming free from January 1, 2013, the number of city residents who use it have failed to increase. Why has this social and ecological experiment not transformed the city? Because town planners forgot to factor in what users actually needed.

Comparing how public transport operates in Tallinn and in Tartu [the second city in Estonia] reveals a few tips on how habits can be changed.

First of all, it becomes clear that price is not the only criterion in the uptake of public transit. Secondly, our choice of transport turns out to depend to a large degree on old habits. For those who had already chosen to get about the town on foot, the price of a ticket is more significant. For those who prefer a steering wheel, the quality of the public transport is a decisive factor.

In Tallinn, the attitudes of car drivers were misjudged. One of the arguments (if one can put populism aside) that had weighed most on introducing free public transport was the aspiration to create a green city: fewer cars should mean less air and noise pollution. But that’s not what happened. According to the Centre for Traffic Research at the Swedish Royal Institute of Technology, transforming Tallinn into a free public transport zone has increased the number of users by a mere 1.2 per cent – not really a significant boost.

Failing to stop the slide

Where Tallinn differs from many cities in other countries is the cost of public transport, which was already cheaper here than the average, and in the fact that more people used public transit here than elsewhere.

There are probably other reasons. At the beginning of this year, Professor Dago Antov of the Technological University of Tallinn, writing in Postimees, pointed out three factors that influence the users’ decisions. First is the time it takes to travel a certain distance. Then comes the cost and whatever else can be included in the word "quality": whether the bus or tram is overloaded, how the other passengers behave, if the driver is polite, etc.

Finally, [[cost is key only for persons on low incomes, while the time it takes to get to a traveller's destination and the quality of the ride are key determinants for people with higher incomes]]. Given that motorists tend to belong to the latter category, one can in some ways understand why free public transit has not taken more cars off the road.

Free for some, not for others

Other factors have slowed the decline in the number of motorists. The most important is probably the fact that public transport is free only for registered residents of Tallinn city. The residents of the municipalities close to the capital [who come into the city to work] and who make up the bulk of the drivers in the city had no motivation to leave their cars at home. People, it’s now abundantly clear, behave not according to what City Hall expects of them, but according to what suits them best.

Early in 2012, Hannes Luts, from the Technological University of Munich wrote in Postimees that if public transit remains a service that is slow and of low quality, people will stay away from it even if it is free. This is largely what has happened in Tallinn.