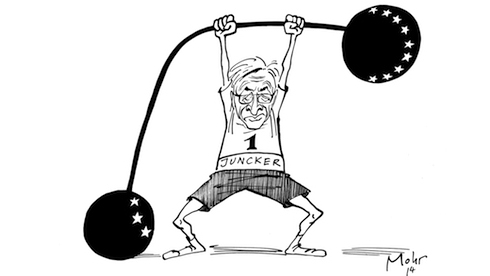 The Juncker Commission under pressure

The new Brussels executive is passing before the European Parliament. If Parliament was able to choose the Commission’s president, it can also dismiss commissioners that are not to its liking: a contradiction that weighs on the relations between institutions.

The Juncker Commission is meeting strong resistance during its hearings in the European Parliament. If Jonathan Hill, the commissioner of financial services, has shown proof of great sympathy and erudition, he has also shown a weak knowledge of the sector he is supposed to manage and a disposition for avoiding tough questions with empty answers. His past as a financial sector lobbyist and his nomination by a government with little popularity in Europe — that of British prime minister David Cameron, who voted against Juncker — also complicate his presence on the Commission.

There is also the case of Pierre Moscovici, the former French economy minister, who is charged with overseeing the budgets of member states. His hearing comes as France has announced that it will not only fail once again to meet its budget reduction objectives, but that it will do so shamelessly: in the words of Prime Minister Manuel Valls, “we do not ask for Brussels’s permission, but simply communicate our figures.” These words brought a heavy reproach from liberal French MEP Sylvie Goulard, who accused the government of “magical thinking” in a devastating article in the Financial Times.

Spanish candidate Miguel Arias-Cañete is under pressure due to his personal links with the oil industry, his regrettable sexist comments during the campaign and his financial interests. The Greens are so unhappy that they’ve launched a campaign on Avaaz that describes him as “a well-known ‘capo’ in the oil industry”.

Other candidates are also certain to pose problems. Greece’s Dimitris Avramopoulos, designated Commissioner for Migration and Home Affairs, comes from a country where immigrants were subject to particularly poor treatment during the crisis. Human rights groups also question whether the Greek Minister for National Defence is really the right person for this job.

The list of doubtful candidates also includes the Hungarian Tibor Navracsics, charged with overseeing education, culture, youth and citizenship, who was named by the hard-right government of Viktor Orbán, which has ceaselessly restricts liberties, reduces fundamental rights and intimidates immigrants since coming to power.

[[For some, like the president of the European Green Party, Philippe Lamberts, these nominations are a bad joke. Others, more twisted, insinuate they amount to a deliberate strategy of Juncker to punish governments for presenting him with such mediocre candidates]] or for trying to meet their own national interests and carve a Commission tailored to their own requirements.

The fundamental problem with the parliamentary hearing process — a very useful mechanism from a democratic point of view — is that it is also very revealing of the unresolved tensions between the Parliament, member states and the European Commission that dominate European political life. On one hand, the European Union is becoming even more parliamentary, by voting in a candidate to the [Commission] presidency following the elections [in May]. But on the other hand, we continue to have a system of separation of powers that makes the European Parliament seem like the United States Congress.

To put it simply, Parliament has named the president of the Commission, but it does not politically support the Commission, which has to win confidence one vote at a time. In return, the Commission is a government without a stable parliamentary majority. As a consequence, those who voted for Juncker will not necessarily vote for his commissioners: European socialists voted for Juncker, but they do not want Arias-Cañete; [the European Peoples’ Party] would do away with Moscovici; and the liberals would vote against Navracsics. Politics within the European Union is one thing, fine, but it’s another for partisanship to reign when it’s a coalition of populists, liberals and socialists who govern. This opens a more complex political situation, which reflects the contradictions of the European political system: we seek consensus and confrontation at the same time. Is it necessary to choose?