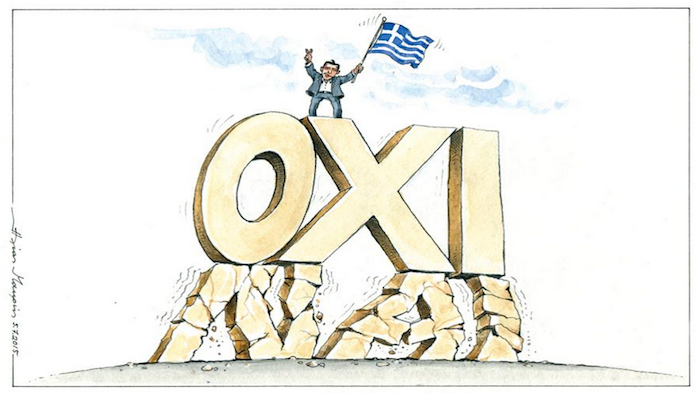 ‘The odyssey is far from over’

The clear victory of the “no” ("OXI" in greek) vote in Sunday’s referendum unambiguously shows that Greek voters want an end to the austerity measures pushed for by Greece’s international creditors and eurozone partners. While largely welcoming this expression of democracy, the European press stresses that an agreement on a new aid plan is indispensable.

“The odyssey is far from over” headlines The Guardian, which economics editor Larry Elliott gives as a warning to eurozone leaders determined to impose austerity on Greece despite Sunday’s no vote. “Put simply,” Elliott argues, “they should try a bit less stick and a bit more carrot” through debt relief. Even if leaders come to a deal, the crisis has unsettling long-term implications —

Greece has highlighted the structural weaknesses of the euro, a one-size-fits-all approach that doesn’t suit such a diverse set of countries. One solution would be to create a fiscal union to run alongside monetary union [...]. This, though, requires the sort of solidarity notable by its absence in recent weeks. The European project has stalled.

The message of the Greeks is clear, writes Bart Sturtewagen, editor-in-chief of De Standaard. After a week of (almost entirely) closed banks and the considerable damage this caused to daily life business and the economy, “an unexpectedly large majority anyway chose to take the risk to say no to the bailout of the European Union and the IMF.” Although the price to pay will be incredibly high and the results will be a dramatic blow to the eurozone and the European Union as a whole, Sturtewagen says —

The inclination to no longer support the Greeks is an understandable reaction. But this is pre-eminently the moment to keep our heads cool. It is the dialectic of crime and punishment that has brought us in this misery. This approach has proven its uselessness over and over again. The question of a debt rearrangement can no longer be avoided. Even the IMF knows that. If Tsipras really wants to do something with his victory, he needs to prove his country doesn’t only want to receive money, but also wants to change himself and his government. Voting no was provocative, but unfortunately also the easy part.

Athens is on the brink of Grexit following a referendum in which Greek voters rejected the terms of the bailout, but “there is still flickering hope” that there will be no return to the drachma, writes Tomasz Bielecki in Gazeta Wyborcza. The Warsaw daily stresses that it is now up to Paris and Berlin to decide what comes next —

New aid for Greece has to be accepted by 18 eurozone members and Germany is not the most hawkish of them. However, if chancellor Angela Merkel were to yield to the Greeks, she would have to allay the anger of the Dutch, Spanish and Lithuanians who are tired with the Greeks’ stubbornness. It is not certain whether she would succeed as emotions fly high on both sides and the situation could easily spin out of control.

“The EU must minimize the debris caused by the Tsipras government,” writes Stefan Ulrich in the Süddeutsche Zeitung. The EU should, he argues, grant emergency aid to Greece; for any new big aid programme, Greece will have to make proposals for reforms or “the Euro could very well live without them.” He calls the result of the referendum a “no to compromise” —

The Greeks are not the only people in Euro-Europe. They can decide their own destiny. But they cannot dictate anything to other people and their governments. And they especially cannot dictate terms to other eurozone members which would see Greece receive billions of euros from them with no conditions.

Given the referendum’s outcome, SME’s Peter Schutz is sceptical about any deal on the Greek crisis and predicts a rather unpleasant future for the country. July 5 will enter the history books in a similar way to 9/11 or the Lehman Brothers, as the Greeks’ refusal of the creditors’ programme will start writing a new chapter in the history of Greece, the eurozone and even the EU, the liberal daily’s editorialist suggests. In his opinion, Greece could eventually leave the euro and the abyss formed between Greece, France and Germany will prevent any possibility of future cohabitation —

The Greeks will taste armageddon, or something very similar, as the financial system could collapse today, while imports of basic commodities like hospital supplies could be halted tomorrow [...]. Furthermore, they can expect a wave of bankruptcies accompanied with layoffs.

For the Spanish daily, the victory of the “no” vote in Greece yesterday represents “a serious challenge to the European project” and the moment requires “a response that is both tactical and firm” —

Europe is faced with a decisive moment. Every step it now takes is risky and delicate. But it is important not to leave the future in the hands of a group of demagogues in Athens and those in many other European countries who would like to join them over the coming days. The result of the referendum requires skilful handling, wisdom and competence from everyone, from Alexis Tsipras’ government to the eurozone, to move beyond politics as usual and avoid the sudden collapse of the Greek economy. [...] The democratic and economic tangle is immense. We must combine the desires of the Greek people with those of other European citizens who have the disadvantage of not having held a referendum, but who are represented by equally legitimate governments.

Jean-Christophe Ploquin explains that the “no” vote in the referendum does not solve Greece’s problems. Indeed, “after the detour to the urns, the Greeks now urgently need to find a way to avoid the bankruptcy of their banks and the state itself.” In addition —

After seeking the approval of its voters, Greece will once again be confronted by another democratic reality: the legitimacy of the governments of other eighteen eurozone members, where public opinion and parliaments are becoming worried and impatient. [...] All of Europe’s leaders will now distrust a prime minister gifted in the art of sidestepping issues and whose challenge to the liberal system currently in force is an unknown quantity. Does Alexis Tsipras think that Greece can get out of this alone? Is he committed to European cohesion in spite of its ups and downs?