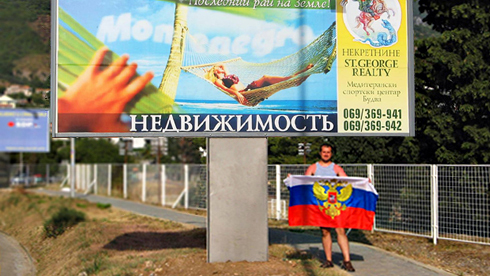 The Russians invade the Adriatic coast

They come for the sea, sun, for peace and quiet … and business opportunities. Taking advantage of old historical and cultural ties, more and more Russians are settling the former Yugoslav republic and EU member candidate Montenegro.

| Welcome to Montenegro, where Russians feel at home.

For the Russian Vadim Soendoekov every working day starts in the same way: with a cup of coffee on the beach. “The beach, the sun and the sea, what more could you want?” he asks from under his straw parasol.

The beach on which Soendoekov enjoys his morning coffee lies at the foot of the centuries-old ramparts of Budva, a picturesque town that is regarded as the heart of tourism in Montenegro. Here the sun shines three hundred days a year.

There are worse places where to start your day. That’s what Soendoekov must have thought when he first arrived here at the Adriatic coast for a holiday five years ago. He decided to stay. Together with two Russian friends he runs a real estate firm in Budva.

And there is no shortage of clients. In fact, so many Russians have flocked to the Montenegrin coast in recent years that Budva is sometimes nicknamed Moscow-on-Sea. Even in the low season, the nearby airport provides three flights a day to the Russian capital.

But not only tourists are on board, as a strikingly high number of Russians, especially from the middle class, have moved for good to the Adriatic coast. They are there to serve their compatriots who overrun the coast during the peak season or have a profession that they can also practice abroad.

In a way these Russians are following a century-old tradition, for in the 19th nineteenth century well-off Russians drifted to the Crimea or the Mediterranean, in search of warmer climes. But the weather is no longer the most important reason for their migration. It is at the Adriatic coast that they find the peace and quiet so lacking in Russia. Especially Moscow has, according to many, becoming an impossible place to live in.

The first thing that Nadja Lapteva noticed when she landed in Montenegro was the word “polako”. “It means take it easy, relax, expressions that I had forgotten existed in Moscow. There, everybody is in a hurry.” Last year she made an attempt to return to Moscow. But the daily traffic jams were too much for her. She now runs one of the three Russian schools in Budva.

Escaping the hectic city life is also the main reason given by Konstantin Pandipoelovitsj, a 30-year-old programmer. “Moscow has more murders than in Mexico, only cigarettes, vodka and caviar are cheap, and as soon as you make any real money, the KGB appears at your doorstep.” High-speed Internet is the only thing he misses about Moscow.

Compared with Russia, Montenegro is a normal country. Despite the widespread corruption, the country is well on its way to becoming one of the next Member States of the European Union. Membership of the NATO is also on the wish list of the government in Podgorica, the capital.

This has not tempered the Russian’s love, however. Fact is that Montenegro has something that the other Mediterranean countries cannot offer: a culture that is remarkably similar to that of Russia. Like the Russians, the Montenegrins are Orthodox and, as Slavs, their languages are related. Even their coats of arms are remarkably similar. Also the fact that the Russians do not require a visa makes it just that little bit easier.

Did anybody complain when the Germans occupied Mallorca?

On top of this, there are the historic ties. Moscow has since the 19th century acted as the protector of Serbia, with which Montenegro formed a single country until 2006.

Thanks to Russian investments in the tourism industry, the crisis did not hit Montenegro as hard as the rest of the region. Numerous luxurious apartment buildings providing accommodation to the management of Gazprom and other energy giants have mushroomed around Budva in the past five years.

The latest project is on top of a mountain: a high-security residential district offering a breathtaking view of the bay. Carsko Selo, the town of the tzar, is its official name, but everybody calls it the Russian village. And this trend extends beyond real estate as the Russians are also gaining influence in other sectors.

Seven years ago the Russian oligarch Oleg Deripaska bought the aluminium plant of Podgorica, which is the largest employer of Montenegro and accounts for more than half of this small Balkan state exports. This prompted the German think tank Stiftung Wissenschaft und Politik to conclude in 2010 that the Montenegrin economy is now firmly in Russian hands.

Not everyone is pleased with this development. Questions were raised last year in the European Parliament about the growing Russian influence in Montenegro.

But the Russians dismiss the criticism. One of the first inhabitants of the “Russian village”, a businessman from Moscow, responds angrily. “Did you hear anybody complain when the English invaded the Costa del Sol and the Germans occupied Mallorca?”