There’s no getting rid of Berlusconi

Weakened by scandals and rebellious allies, Italian Prime Minister Silvio Berlusconi nonetheless survived yet another political crisis on December 14. However, the Italian people will end up having to pay the piper, according to the European press.

Winning by a nose (314 votes to 311), Berlusconi garnered just enough votes in the Chamber of Deputies to defeat the censure motion brought against him by the opposition. Previously, he’d won a motion of confidence in the Senate. “Berlusconi won without a doubt, but the consequences of this victory should give pause for some serious thought," writes Sergio Romano in Corriere della Sera.

The PM now has two options, the leader writer explains. “He can either rejoice in his success, discredit his adversaries and see out the end of his term.” But “a three vote margin won’t protect him from the obstacles ahead, though he can always blame the opposition and play the part of the betrayed leader. In that case, the country will, once again, be condemned to the indecent spectacle we have witnessed over recent months: controversies and quarrels with no attention paid to the economic and financial problems we face. The other possibility is to build a majority on a new foundation,” such as a revamped electoral system.

Writing in Milan daily La Repubblica, Barbara Spinelli notes that “the victory of Il Cavaliere is, in large part, but a façade. Not only does he rely on nothing more than a weak majority, but he must also face two opposition parties on the right (Christian Democrats the UDC and former ally Gianfranco Fini’s FLI). The last coup failed but the crisis still bubbles beneath the surface”. Because “behind the façade lurks the difficult but inevitable fall of the Berlusconi system, fomented by the same people that brought him to power. It’s like Thermidor,” Spinelli adds, warning against “Berlusconi’s dangerous positive thinking” and his incredible ability “to keep his head above water during electoral campaigns” which might allow him to avoid defeat and successfully become President of the Republic, his most recent personal ambition. 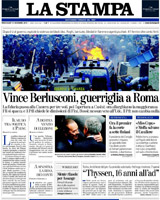 Meanwhile, Rome is burning, Mario Calabresi writes indignantly in Turin's La Stampa. In parliament, “the politicians got what they’ve been waiting for for months: shouting, tallies and then celebrations”. In the streets, where anti-Berlusconi forces demonstrated, there was “smoke, explosions, nightsticks, and helmets, all reminiscent of the 1970s”. With over 100 people injured during street protests, “(t)hese images of Rome are frightening and show the gulf that exists between an isolated political community and a country which is slipping away and turning nasty, devoid of either dreams or direction… Politicians should look beyond the flashpoints and see that the majority party is worn out and shorn of illusions. Instead, they are closing the gates behind themselves, thus leaving outside, not only the riotors but also the Italian people”. 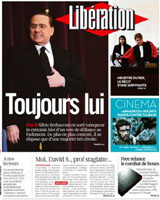 “Rather than accusing and criticizing the man and his billions, shouldn’t we ask if Berlusconi is not a metaphor for Italy itself, or at least, for a certain Italy?” French daily Libération wonders, adding that “the man was elected three times by universal suffrage” and that “his victories reflect the failures of the opposition. As if, in Italy, there hasn’t been an alternative for the last 16 years – either on the right or on the left”.

For Spanish daily El Pais, “this [Parliamentary] show will further discredit Italian politics at an international level and will further fuel the growing anti-political current that eats at the foundations of this ancient parliamentary democracy which has become the cradle of employer totalitarianism”. In the current context, the Madrid daily notes, the violence in the streets “is loathsome,” but “points to a seriously imploding social climate”. 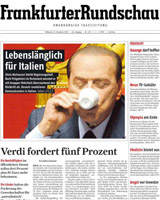 But perhaps Italy is not an isolated case, suggests German daily Frankfurter Rundschau. “Before the rest of us perfect Europeans, surround Italy with the highest wall possible and abandon it to its fate for, let’s say, the next hundred years, we should ask ourselves if we are not witnessing a decline in democracy which may not be that far off in other countries.” Only a few degrees separate us from Italy, the paper argues. “It’s not just that model European country – France – that under Nicolas Sarkozy is increasingly following Italy’s example. Throughout Europe the trend to depoliticise and to turn politics into a form of entertainment continues”.